Skip to main content
Future of the Mediterranean Union

Growing Challenges, Lack of Political Will

The challenges in the Mediterranean region are greater then ever – especially due to the financial crisis. Yet the intensification of cooperation between the EU and the southern Mediterranean states agreed last year is flagging. The main reason is the conflict in the Middle East. An analysis by Daniela Schwarzer

The Union for the Mediterranean was launched during the Paris summit on 13 July 2008. The Union is meant to be building on, but not replacing, the EuroMed Partnership

​​ 14 July 2009 sees the first anniversary of the Union for the Mediterranean. Taking stock, the picture is bleak. The quantum leap in regional cooperation that France's President Nicolas Sarkozy intended has yet to be taken. The collaboration under the new title of "Union for the Mediterranean" is hampered by the same problems as the European Union's previous policy on the region.

No answers as yet to major challenges

The challenges of the Mediterranean region have been on the table for years: the consequences of climate change for the region and a growing demand for energy; the wealth gap and the increasing pressure of migration; terrorism and other security problems associated with the repressive nature of some of the local regimes. On top of all these issues, pollution of the Mediterranean, drinking water shortages and the destruction and pollution of natural habitats and agricultural areas in the coastal areas remain serious problems for most states bordering on the Mediterranean – problems that cannot be dealt with on a solely national basis.

Despite various bilateral and European approaches to cooperation, there are still no effective political answers to tacking these challenges. This is a major problem, as the current financial and economic crisis is likely to intensify the region's social and economic instabilities.

Political collaboration between the EU and the southern Mediterranean states is not a new invention. In 1995 the European Union intensified its policies in the region with what was called the Euro-Mediterranean Partnership (also referred to as the "Barcelona Process") and strengthened institutionalised relations between the European Union (EU) and its neighbouring countries in the southern Mediterranean in the form of agreements on trading and cooperation.

A permanent parliamentary body, the Euro-Mediterranean Parliamentary Assembly, was established. The EU also intensified bilateral relations to several states on the southern edge of the Mediterranean from 2004 on. 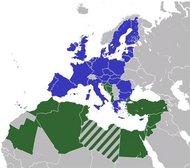 The Union consists of all the EU states and those countries on the Mediterranean rim or those which are participating in the EM Partnership. Libya has oberver status

​​ With these existing provisions in mind, the Union for the Mediterranean was founded in 2008. The aim was to provide new impetus for cooperation, launching specific projects to underline existing policies in certain areas and strengthening collaboration structures by creating a co-chairmanship and a general secretariat.

Initial milestones on the way to setting up the Union for the Mediterranean were reached at the end of last year. The newly established co-chairs, fielded by France and Egypt, are now in office. At a meeting of the foreign ministers involved in November 2008, Barcelona was also selected as the location for the secretariat. Preparations for the first projects to accompany the Barcelona Process have begun, for instance on maritime security or solar energy.

However, the collaboration then came to a near standstill for months. The escalating Middle East conflict at the end of 2008 meant that not only the policy meetings but also the cooperation itself on the working level were put on ice. "Due to the Middle East crisis, no meetings of the Mediterranean Union are currently taking place," the German foreign office stated in response to an enquiry from the German parliament in February 2009.

Meetings on the policy and the working level were in fact halted in response to pressure from some Arab countries. The "permanent joint committee" in Brussels for example, set up at the founding summit to ensure fast reactions in the event of crises, did not meet up in the first quarter of 2009. 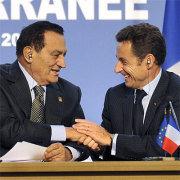 Hosni Mubarak and Nicolas Sarkozy in Paris: the UM is run by a French-Egyptian co-presidency. The idea of Union is to form economic and political connections between Europe, North Africa and the Middle East

​​ At the opening summit of the Union for the Mediterranean, held in Paris in July 2008, the 43 participating states had worked around the subject of the Middle East conflict by refraining from issuing a policy statement. The foreign ministers' conference in November 2008 saw the Israeli and Arab sides struggling for compromises. Firstly, the secretariat was not set up in an Arab country, in response to pressure from certain Arab states. As some states saw it, this would have meant too great a normalisation of relations with Israel.

Secondly, the status of the Arab League was clarified. It can now attend all Mediterranean Union meetings but has no right to vote, with Israel promised the post of vice-secretary general in return for this concession. Yet this initial willingness to cooperate on the part of the Arabs and Israelis collapsed in the face of the Israeli bombings of Gaza in December 2008.

Not an equal partnership

Four further challenges are hampering cooperation in the Mediterranean region, alongside the Arab-Israeli conflict. The first is that no equal partnership has been established between the northern and southern states. The Mediterranean Union is still seen in the southern region primarily as an EU project, if not as a project of French political interests.

This is almost certainly partly due to the French president's communication and approach, but is equally down to a lack of initiative and the current blockade attitude taken by certain countries on the southern shores of the Mediterranean. Turkey is also taking a cautious stance, hoping to prevent the Mediterranean Union from becoming an alternative to its controversial chance of EU membership.

Secondly, it is doubtful whether the current approach sufficiently supports social and political change in the region, which will be necessary to increase stability and political reliability on the Mediterranean in the long term. When France formulated its first proposals for a Mediterranean Union, observers were astounded by the apparent departure from political conditionality – there was no attempt to tie cooperation with the southern Mediterranean states to conditions (such as observation of constitutional norms).

From the very outset, the Union for the Mediterranean accordingly favoured project cooperation above major policy ventures, for example on respect of human rights and implementing constitutional principles. This contradicts the aims of the previous Barcelona Process, which understood Europe's involvement in the region primarily as a contribution to transforming the economic and political systems in the southern Mediterranean area.

Only after Turkey was given a guarantee in March 2008 that the UM would not be an alternative to Turkish EU membership, Ankara accepted the invitation to participate

​​Yet the de-politicisation of the EU's Mediterranean policy taking place within the project-focused cooperation, coupled with an insufficiently developed involvement of civil society in the southern Mediterranean states, is unlikely to be promote transformation, and may even reduce transformative potential. A policy that does not seriously support transformation processes, however, will do no favours to the EU member states' medium and long-term security interests.

And finally, the current economic and financial crisis presents a major challenge for the success of the EU's Mediterranean policy. A majority of the planned projects are based on mobilising promotional loans, private funding and state financing in the region. But the crisis has reduced solvency and willingness to finance such projects. So it is unlikely that the existing EU budget for Mediterranean policy – some 16 billion euro from 2007 to 2013 – will be significantly boosted by any additional funding.

In contrast, the economic and social tensions in the region – and the resulting pressure of migration, among other factors – look set to take a major leap as a direct consequence of the crisis. Added to that, tight state finances may well reduce willingness to invest in the environment, infrastructure, energy and education in the region. This would have a negative effect on the development opportunities of the southern Mediterranean states.

The future of Mediterranean policy depends not only on developments in the region itself, but also on the importance the EU accords to its respective neighbouring regions in future. Traditionally, attention tends to switch between the South and the East, depending on which EU country holds the presidency of the European Council. Under Germany's presidency in the first half of 2007, attention was focused almost exclusively on the East. In 2008, Paris shifted the focus to the South.

The pendulum is now set to swing back to the North-East, if the current Czech presidency and from July 2009 the Swedish term in office are to press on with the Eastern Partnership proposed by Sweden and Poland.
This regional focus is understandable, given the respective geopolitical interests of the EU member states. Yet the challenge that remains is to find a balance between the geographical regions acceptable for all European partners, and to overcome the greatest hurdles for cooperation.

Daniela Schwarzer is head of the research group on EU integration at the German Institute for International and Security Affairs in Berlin.

Interview with Volker Perthes
New Co-operation Opportunities for Europe and the Arab World
Khaula Saleh spoke to Volker Perthes, Middle East expert and director of the German Institute for International and Security Affairs in Berlin, and asked him about the political significance of the Mediterranean Union founded in Paris by the EU and the 18 littoral states of the Mediterranean in Europe, north Africa, and the Middle East

Sarkozy's Union for the Mediterranean
France as a Centre of Political Gravity
Nicolas Sarkozy has chalked up an initial success as a peace broker in the Middle East with the foundation of the Mediterranean Union. But how solid is the new collaboration, and what are the strategic considerations behind it? Bernard Schmid has the details

Interview with André Azoulay
Cultural Dialogue – A Driving Force for Genuine Partnership
According to André Azoulay, advisor to Morocco's King Mohammed VI and head of the Anna Lindh Euro Mediterranean Foundation, cultural dialogue plays a key role in cooperation between the EU and the southern Mediterranean countries. Moncef Slimi talked to him