In order to shore up his influence in Africa, Colonel Gaddafi has in the past fanned the flames of conflict and acted as a peace mediator as he felt inclined. Interestingly, the Libyan leader could bring stability to the region without losing any of his influence. James M. Dorsey has the details 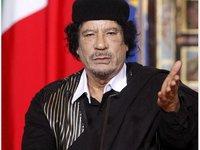 More than just "a theatrical gadfly on the international diplomatic scene": Libya's head of state, Muammar Gaddafi, fuels conflict and fosters reconciliation depending on whatever best promotes Libya's national interests

​​ To most, Libyan leader Col Muammar Gaddafi is a theatrical gadfly on the international diplomatic scene. It's an image Gaddafi, the world's longest ruling dictator, carefully cultivates with his colourful designer garb, his preference for tents rather than posh luxury hotels in western capitals and his at times shrill political declarations such as his recent call for jihad against Switzerland.

Yet, to the south of his desert republic, Gaddafi plays a key role across a broad swath of the Sahel stretching from Sudan to Mauritania. Depending on his definition of Libyan national interest, Gaddafi sometimes fuels insurgencies and ethnic and religious conflict; at other times he helps ease tensions and brokers uneasy reconciliation.

At home, Libya last month released some 200 Islamists, many with past connections to al-Qaeda, as a result of what Gaddafi's son, Saif al-Islam, called a successful "dialogue and rehabilitation programme". The rehabilitation programme raises many of the same questions as Libya's influence in the Sahel, where Libyan political manoeuvring has produced short-lived reductions in tension but no long-term solutions based on social, economic and political reform that would ensure that tensions do not erupt again. 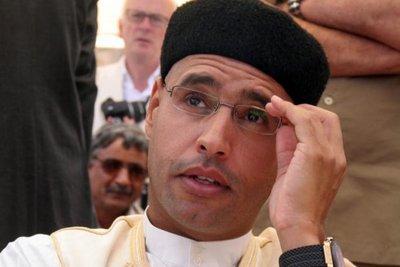 Gaddafi's son Saif al-Islam referred to Libya's recent release of some 200 Islamists, many of whom were linked to al-Qaeda, as the result of a successful "dialogue and rehabilitation programme"

​​ Little is known about Libya's rehabilitation programme and whether it involves the reintegration of jihadis into society as it does in Saudi Arabia, which offers repentants a job, a home and a car of their own and arranges marriages for them so that they can establish families.

"With the release of these leaders, we have brought to a conclusion our programme of dialogue and reconciliation," Saif al-Islam announced. Libyan officials said that in clashes over a number of years, 165 security officers and 177 insurgents had been killed. An estimated 400 militants still linger in Libyan prison, 232 of whom would soon be released, according to Saif al-Islam. At a news conference he called on Libyan Islamists fighting in Algeria and Mali to lay down their arms and return home as free citizens.

Many of those fighters trace their roots to Gaddafi's Islamic Legion and Arab Gathering established in the 1980s as a tool that allowed the Libyan leader to manipulate events in countries across the Sahel. Darfur's feared Janjaweed – Arab tribesmen on horseback who at times did Sudanese leader Omar al Bashir's bidding by plundering, destroying and terrorizing much of the population suspected of supporting anti-government rebels – are a case in point.

"Like any extreme movement, the Janjaweed had its roots in hardship and victimhood," says Rob Crilly in his just published memoir, Saving Darfur, Everyone's Favourite African War. "Desertification and a series of devastating droughts throughout the 1980s may have intensified pressure on land, closed off pasture and increased tribal tension. But it needed one last ingredient to transform it (the Janjaweed) into a vicious killing machine… and (that ingredient) came not from the Arabs in power in Khartoum, but from across the Sahara." 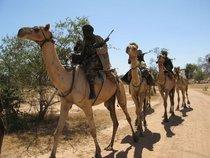 ​​ That ingredient was Arab supremacy infused by Islam. It was the ingredient Musa Hilal, the Janjaweed leader indicted on charges of crimes against humanity by the International Criminal Court in The Hague, needed and that sealed the fate of hundreds of thousands of Darfurians who lost their lives and millions of others who were forced to flee the killing grounds. In Gaddafi's view, Darfur constituted an eastern access point to Chad, a forsaken country the Libyan leader had long eyed as a cornerstone of the pan-Arab empire he hoped to create in the Sahel.

Starting in 1985, Gaddafi supplied Sudan with oil and weapons in exchange for being allowed to draft Darfurian tribesmen into his Islamic Legion and to rearm Chadian dissidents so that they could launch cross-border attacks from Darfur. "Where once the tribes had rubbed along together, intermarrying at will and resolving conflicts through old traditions of dialogue and diya, or blood money, now outside forces had disrupted relations," says Crilly. "The multiple identities of the region's people – Sudanese, Darfuri, Arab, tribe, clan – were giving way to a single label."

Not false, but fickle

In effect, the genie had been let out of the bottle. While it catapulted Gaddafi into the role of a big player in the region, it significantly complicated efforts to achieve stability and address local grievances in countries with weak governance across the Sahel. As chair of the African Union last year, Gaddafi changed his colours, promoting peace in the Sahel instead of friction. Relying on his financial clout and regional authority, Gaddafi mediated an end to the conflict between Sudan and Chad, which he had helped fuel, that allowed Chad to co-opt the country's rebels.

But since the agreements were inked, Gaddafi has done nothing to ensure the country's long-term stability. "The discrepancy between its strong pressure to get signatures on agreements and its lack of interest in implementation suggests Gaddafi's mediations are based less on a desire to stabilize Chad than to assert his regional influence," the International Crisis Group says in a just released report on Libyan influence in the Sahel. "If Libya were to engage politically in necessary structural reforms (…) it would be able to capitalize on its mediation efforts while maintaining its regional influence."

Gaddafi's decision to supply arms and oil to Sudan is extending the crisis in Darfur; easing the suffering of the people in the region is not a key issue for the self-styled revolutionary leader

​​ In October, Gaddafi persuaded rebel Tuareg tribesmen in Mali and Niger – two countries where al-Qaeda's northern African affiliate, al-Qaeda in the Islamic Maghreb (AQIM), has often partnered with local tribes – to conclude peace agreements with their governments. Quoted by the Libyan state-run news agency, Gaddafi said that this time, all parties were committed to making the agreements stick.

"For the first time, there will be no single armed rebel left in the mountains of Mali and Niger, and all those who used to lead the rebel movements are present alongside me," Gaddafi said, naming five top Tuareg rebel chiefs from Mali and Niger. "At this very moment, there are 1,100 fighters who have laid down their arms in Agades (in Niger). They are listening to us right now and waiting for me to order them to enter Niger in peace. I tell them: 'Go ahead and enter Niger in peace'."

A coup in February that toppled Niger President Mamadou Tandja, believed to have been supported by Gaddafi, has raised hopes that the new government will address Touareg grievances. Ranked by the UN as one of the world's poorest countries, Niger possesses the world's third largest uranium deposits, whose exploitation benefitted Tandja and his family rather than the Tuaregs and other population groups. 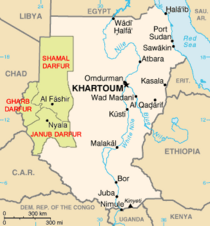 Sights set on a pan-Arab empire: Gaddafi would like to unite the Sahel politically and become its leader

​​ "We hope to implicate all of the people of the region in the economic spin-off of mining in the north, and that there will be a benefit as well for the nomadic populations in these regions," said Aghaly ag Alembo, one of the Touareg leaders, who travelled in late March to the Niger capital of Niamey for talks with the new government.

A wealthy elephant in a porcelain shop

Positioning himself as a peacemaker in the Sahel has done little to enhance Gaddafi's standing beyond the region. Virtually half of the Arab world's leaders refused to attend a summit last month in Gaddafi's birthplace of Sirt. Similarly, virtually no Islamic leader has heeded Gaddafi's call for a jihad against Switzerland, which was ostensibly in retaliation for a referendum last year that banned the building of minarets on mosques but was, in effect, a reaction to the brief arrest of his son Hannibal in a Geneva hotel in July 2008 on suspicion of assaulting staff members.

Late last month, Libya lifted a visa ban on citizens of 25 European countries after Spain, which held the presidency of the EU at the time, said that a Swiss-instigated visa blacklist against 188 Libyans in those countries had been scrapped. "To much of the world, Gaddafi remains a wealthy elephant in a porcelain shop," said one Western diplomat. "Changing that will take a lot more than a couple of wobbly African peace agreements."

James M. Dorsey covered ethnic and religious conflicts across the globe for 35 years as a foreign correspondent for The Wall Street Journal, The New York Times, The Christian Science Monitor and UPI. He is currently a freelance writer and is working on a book about the Middle East's multiple fault lines.

Political Reforms in Libya
Revolutionary Rhetoric or Radical Change?
Last year, Colonel Gaddafi announced his intention to modernise the Libyan "state of the masses". At the recent General People's Congress, however, some of his decisions were rescinded, leaving widespread confusion among Libyans and experts alike. Beat Stauffer has the details

Muammar Gaddafi: 40 Years in Power
Libya's Last Bedouin
Libya's leader Muammar al-Gaddafi has shown many faces since he overthrew the monarchy in 1969. But the one-time pariah certainly has not lost his love of provocation. Rudoplh Chimelli looks back on 40 years of Gaddafi's leadership

Fred Halliday
Sudan between War and Politics
In Khartoum, Middle East expert Fred Halliday of the London School of Economics assesses the future of an Islamic regime relieved by peace in southern Sudan, pressed by the International Criminal Court over Darfur, and seeking a political road beyond revolution.

Libya
Looking for a Fourth Way
Revolutionary leader Muammar al-Qadhafi is currently attempting a foreign-policy balancing act: On the one hand, he is making extensive concessions in an attempt to gain favor in the West, while on the other hand holding fast to his vision of becoming the leader of a "United States of Africa". Arian Fariborz reports

END_OF_DOCUMENT_TOKEN_TO_BE_REPLACED
Social media
and networks
Subscribe to our
newsletter