The White Houseʹs disclosure came a day after the U.S. and Russia refused to back a UN Security Council resolution calling for a ceasefire in Libya. Let us explore for a moment the surprise agreement between the U.S. and Russia. Indeed itʹs exceptional, dictated by the intersection of interests between them. For Russia, Libya is a very important geo-political centre of influence and it was a rich source of arms purchases for four decades under the "Brotherly Leader".

Meanwhile, Trump is banking on General Haftar fighting terrorism, protecting the oil wells and ports, and ensuring the flow of oil to world markets. Trumpʹs bet is based on reports by his national security agencies, which showed that the forces fighting alongside Fayez al-Sarraj and his Presidential Council and government are teeming with Islamist militias, part extremist and part terrorist (including the remnants of al-Qaida, IS, and the group who murdered the U.S. ambassador in Benghazi in 2012) as well as criminal militias dealing in drugs, oil and people. 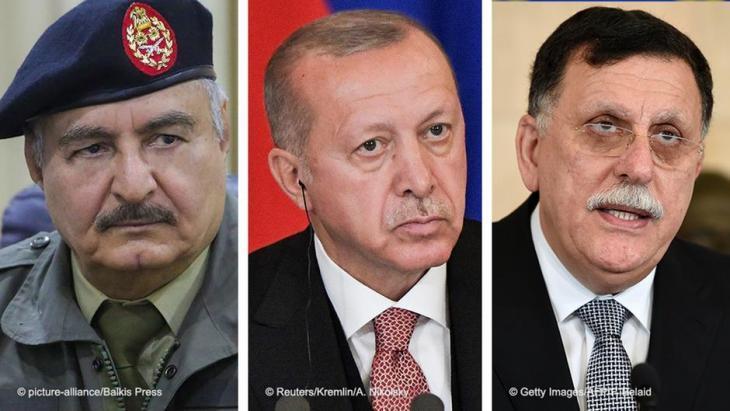 Another proxy war: Haftar, backed by Egypt, the United Arab Emirates and Trump, now controls nearly 90 percent of Libya. The Government of National Accord and Prime Minister Fayez al-Sarraj, count the EU, Turkey and Qatar among their supporters. Along with Qatar, Turkey aims to form a counterweight in Libya – once part of the Ottoman Empire – to its regional rivals in the Middle East

As for the present situation, after almost four months General Haftarʹs forces have taken control militarily of nearly 90 percent of the country, including the outskirts of the capital. The outcome of the intense fighting remains uncertain and both sides continue to reject a ceasefire.

The militias amassed inside the capital and its suburbs are utterly adamant in their refusal to stop fighting, as has been voiced by their political front the Presidential Council (which is recognised internationally, for diplomatic reasons). Reflecting the stance of the various militias, they insist that General Haftarʹs forces should return to their positions before their April 4 attack on Tripoli.

Over and beyond this, according to their loud rhetoric, General Haftar should not have any personal role in any dialogue or negotiation over the future of the country, because he is seen by them as a war criminal. Despite all this, they lack the power required to repel his forces, especially after the hardcore militias from Misrata sustained such heavy losses that their people even took to the streets, calling for information about the fate of their sons amid the rising death toll. In other words, it is highly likely that General Haftarʹs forces will soon enter the capital and take control of sensitive sites in and around the city.

But what next?! .. Will Tripoliʹs inhabitants become a popular recruiting ground for the youth forces of the cityʹs major districts? Or will the city become the target of an exhausting guerrilla campaign which will open the door to a new chapter of blood and destruction?

Home
Print
Newsletter
More on this topic
Civil war in Libya: U.S. undermining "any hope for a successful political process"Resolving the crisis in Libya: Another fine messLibya′s domestic crisis: On the road to nowhereMilitary dictatorships in the Middle East: The real enemies of the Arab Spring
Related Topics
Arab Spring, Arabellion, Democracy and civil society, Khalifa Haftar, Libya after Gaddafi, Libyan Civil War
All Topics

Around the Islamic world, lockdowns and curfews are being extended and religious ceremonies are being cancelled outright in the hope of slowing the spread of COVID-19. Here’s the ... END_OF_DOCUMENT_TOKEN_TO_BE_REPLACED

While some are beginning to protest the lockdown, others are unable to bury their loved ones in accordance with Islam. Here’s the latest from across the region END_OF_DOCUMENT_TOKEN_TO_BE_REPLACED

Coronavirus continues unabated. Iran remains a hub of infection, war-torn Syria has recorded its first case and Yemen is bracing itself for the worst. Here’s the latest from ... END_OF_DOCUMENT_TOKEN_TO_BE_REPLACED

Libyan political analyst Faraj Alasha argues that the Berlin conference on the Libyan war did nothing to change the fact that there is no political solution to end the war raging ... END_OF_DOCUMENT_TOKEN_TO_BE_REPLACED

Violent clashes between parts of the Sudanese security forces and the ominous influence of external financiers of the paramilitary "Rapid Support Forces" (RSF) are endangering the ... END_OF_DOCUMENT_TOKEN_TO_BE_REPLACED

With borders closing and the opportunities for international travel shrinking by the hour, we take a look at coronavirus developments across the Middle East and the wider Muslim ... END_OF_DOCUMENT_TOKEN_TO_BE_REPLACED

A good beginning in putting the situation in a big picture of "civilisational" context. However, I always why most writers do not qualify "democracy" as if everybody agrees with the existing order. The socio-economic fomration in which this "democracy" functions is rarely questioned, especially in today's "neoliberal" form of capitalism that even liberal sccholars have attacked as a source of violence and destruction. The social groups/strata that formed the former Libyan regime and how the regime came about and why it took the features it took is fundamenetal in understanding why Libya could not have capitalist democracy. Neither Egypt, Syria or China. The focus on individuals doesn't help that much because the individuals themselves work within the trappings they found before them. There is a difference between structure and moment. Furthermore, one should not conflate the ideals of the French revolution and how capitalist democracy was established. Achieving full capitalist relations enabled democracy to emerge although capitalist democracy was co-existing with the subjugation of hundds of millions of people in India, Africa, the Middle East. Finally, dealing with destruction and civilisation, shouldn't we mention the biggest destruction in history that toook place in the 20th century? What role did it play in the declaration of human rights and furthering capitalist democracy?

END_OF_DOCUMENT_TOKEN_TO_BE_REPLACED
Social media
and networks
Subscribe to our
newsletter