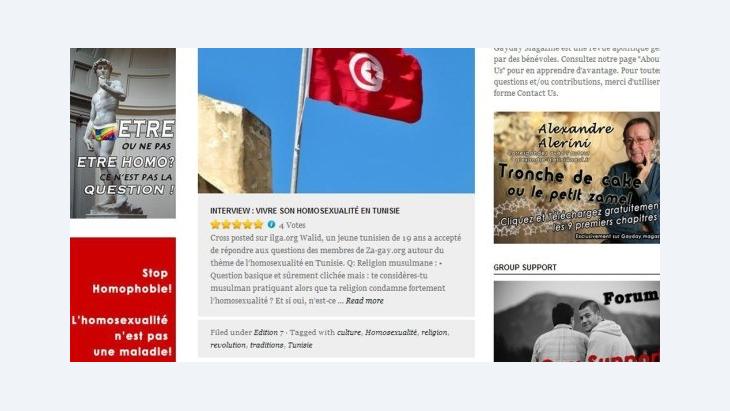 Gay Rights in Tunisia
Not Illegal, but Taboo

﻿Homosexuals in Tunisia celebrated the ouster of dictator Ben Ali, hoping it would improve their situation. But in nearly two years, little has changed for the country's gay and lesbian community. Sarah Mersch reports from Tunis

﻿Houssem sits in a café on the main street of Tunis. As a student and gay man in his early twenties, Houssem is unwilling to give his real name for fear of discrimination and possible intimidation. He doesn't talk to the Tunisian media at all about his online work as a gay rights advocate, because all too often the people making the inquiries turn out not to be journalists.

"Social media helped the revolution here, and now we want to use these tools to fight for our rights," he says. "Some people have supported us, but there have also been a lot of negative reactions."

In the jubilant atmosphere after 14 January 2011, Houssem and a group of like-minded individuals founded Gayday, an online magazine for homosexuals in Tunisia. Suddenly what had appeared impossible under dictator Zine El Abidine Ben Ali seemed to be within reach: being able to express oneself openly on gay rights issues without fear. Gayday grabbed many Tunisians' attention for publicizing a topic that had long been discussed only behind closed doors.

No support from the Human Rights ministry 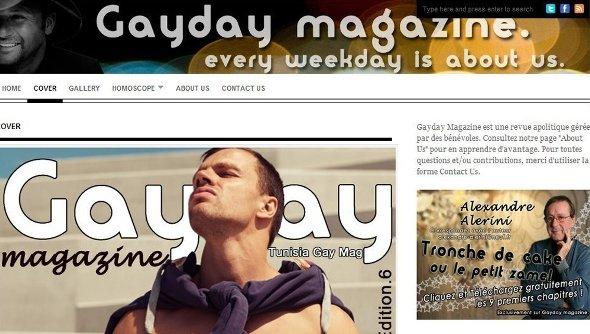 Asked about Gayday magazine on a talk show, the Tunisian Minister for Human Rights, Samir Dilou, a member of the Islamic Ennahdha Party, said even freedom of expression has limits.

"Of course these people are also citizens, but there is a red line and that line is our morals, our history and our culture," he said, adding – to the presenter's consternation – that sick people needed to be treated.

"That was a politically-correct type of insult," says Houssem, with a wry smile. After all, he explains, the minister did not explicitly refer to homosexuals as sick.

Even though countless civil society organizations were founded after the uprising of January 2011, not one is specifically focused homosexual rights. Only the Tunisian Association for Minorities has taken a clear position on the issue. Association President Yamina Thabet has called for discrimination against minorities to be made a criminal offense.

"I dream of a day when homosexual Tunisians can walk down the street with their heads held high and be proud of themselves; a day when they also have the right to walk into the nearest police station and press charges when they're discriminated against," she said.

For Houssem, the most important issue is informing homosexuals of their rights, and reaching out to the public. The problem, he says, is mainly that people simply don't know enough about gays and lesbians.

Religion and the rise of Islamism are not the main problem, Houssem believes. He adds, though, that Islam does provide people with a pretext with which to justify homophobia. Houssem believes that the key is to work slowly and constantly on changing Tunisians' views of homosexuality. 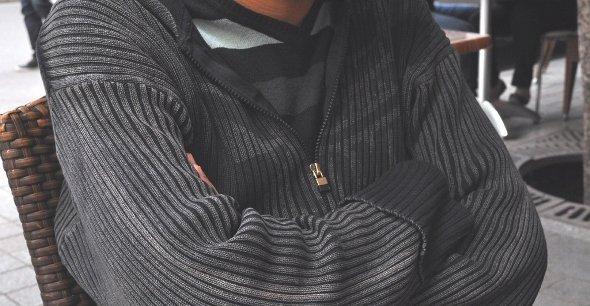 "No gay pride parade down main street": In Tunisia, many gay men are afraid to even tell their friends and family they're homosexual

​​"We're not going to start with a gay pride parade down the main street. That would be a really bad idea. It would hurt the cause rather than help it," he laughs.

The main thing he thinks they should focus on now is creating awareness of gay rights, in society and among potential supporters. Houssem has not yet told his friends and family he's homosexual, because he's scared that coming out will turn his life upside down.

"Maybe I will tell them one day, when I'm financially independent and have a roof over my head," he says. "It's hard to wake up every day and not be able to be myself."

Research project "The Global Qur'an", brainchild of Professor of Islamic Studies Johanna Pink and sponsored by the European Research Council, analyses the history and ... END_OF_DOCUMENT_TOKEN_TO_BE_REPLACED

Arab youth express their hopes and wishes for the New Year, spanning everything from civil and political rights, to education, to arts and culture. By Rafiah Al Talei END_OF_DOCUMENT_TOKEN_TO_BE_REPLACED

Her grandparents are Jews – born in Tunisia and Algeria. Director Cleo Cohen has now broken the silence about this with a very personal debut. By Nadine Wojcik END_OF_DOCUMENT_TOKEN_TO_BE_REPLACED

Moncef Marzouki was Tunisia's first democratically elected president after the fall of dictator Ben Ali. Today he is the most prominent critic of increasingly counter- ... END_OF_DOCUMENT_TOKEN_TO_BE_REPLACED

Asef Bayat, professor of Sociology at the University of Illinois, Urbana-Champaign, has been studying revolutions and how they affect people since 1979. In his recent book, " ... END_OF_DOCUMENT_TOKEN_TO_BE_REPLACED

Every year in December, the team at Qantara.de takes a look back at the articles that proved most popular with our readers. This year is no different. Here is a run-down of the ... END_OF_DOCUMENT_TOKEN_TO_BE_REPLACED
Author:
Sarah Mersch
Date:
Mail:
Send via mail

END_OF_DOCUMENT_TOKEN_TO_BE_REPLACED
Social media
and networks
Subscribe to our
newsletter