Since the storming of the Mavi Marmara at the end of May, a growing number of aid flotillas is being sent to Gaza from all around the world. A group of German Jews also wants to demonstrate solidarity with the people in the Gaza Strip. Bettina Marx reports

Israel imposed a blockade on the Gaza Strip in June 2007; the number of attempts to break through the blockade have increased in recent times

​​ A group of a dozen German Jews has set up an organisation called "Jewish Voice for a Just Peace in the Middle East" and now wants to sail to Gaza in its own small ship.

They have made a conscious decision to oppose the majority of Germany's Jews, which rejects criticism of the Israeli government and does not question the blockade of Gaza.

According to Dr Kate Katzenstein-Leiterer, one of the organisers of the enterprise, they want to set sail at the end of July and bring relief items to Gaza.

On board they will have a cargo of schoolbags, which were donated by schools in Berlin and the German state of North Rhine-Westphalia, musical instruments, and fishing equipment such as outboard motors and fishing nets. "We only have a small boat, which is why we can only take a small amount of largely symbolic items," explains Katzenstein-Leiterer. 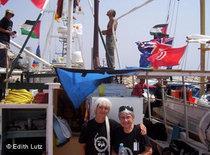 "We want to show the Palestinians in the sealed off Gaza Strip that there are Jews that come to them with aid rather than with bombs and guns!" says Katzenstein-Leiterer

​​ For the organisers, the political signal they want to send is more important than humanitarian aid. The purpose of their trip is to break the sea blockade that Israel has imposed on Gaza.

According to Katzenstein-Leiterer, the blockade is completely illegal and goes against all international conventions. But breaking the blockade is not the only objective of this group of German Jews. Says Katzenstein-Leiterer: "We want to show the Palestinians in the sealed off Gaza Strip that there are Jews that come to them with aid rather than with bombs and guns!"

However, it is doubtful that they will even get to land in Gaza at all. To date, Israel has succeeded in stopping most of the ships that have tried to break the blockade. 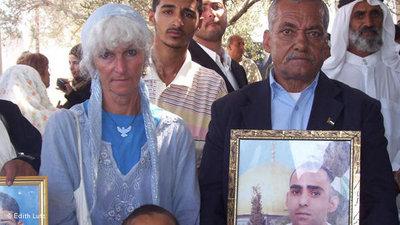 Edith Lutz travelled to Gaza by sea in 2008; a second attempt by land failed last year

​​ So what will the activists on board the Jewish ship do if they are stopped by Israel? "That could happen. If it does, we will protest, but we will not use any violence," says the organiser.

At the end of May, a flotilla of international activists was dispersed by the Israeli navy in the Mediterranean. Nine Turkish citizens were killed during altercations on board the passenger ship Mavi Marmara. Kate Katzenstein-Leiterer is convinced that nothing like that will happen to them: "We will not use any kind of violence whatsoever."

She goes on to say that if they are stopped, they will turn back and try to reach Gaza by ship at a later date. They have no intention of sailing for Egypt or the Israeli harbour of Ashdod in order to transfer their relief items to trucks. According to Katzenstein-Leiterer, they just do not believe that all their relief items would actually reach their destination.

For nine months now the biologist and brain researcher Kate Katzenstein-Leiterer in Berlin and the teacher Edith Lutz in the Eifel region of western Germany have been planning their sea voyage to Gaza. Lutz has a doctorate in Jewish Studies and has been working on behalf of the people in the Gaza Strip for quite some time.

According to Katzenstein-Leiterer, the enterprise is not only a political act, but also a "dictate of humanity"

​​ In 2008 she succeeded in visiting Gaza on board a small boat belonging to the international "Free Gaza Movement".

In January, she tried to repeat the feat, this time on land. However, the planned protest march involving over 1,000 activists from 47 countries was stopped in Egypt. Only a small number of participants were allowed into the Gaza Strip. Edith Lutz was not among them. Now she wants to try her luck again, this time on board the Jewish ship.

According to Lutz, her plan has already caused a stir in the Israeli media. The reaction has been negative and mostly marked by incomprehension; she has only received very little support. Most Israelis cannot understand, she reports, that Jews from other countries want to bring help to the Palestinians instead of standing shoulder to shoulder with Israel.

END_OF_DOCUMENT_TOKEN_TO_BE_REPLACED
Social media
and networks
Subscribe to our
newsletter