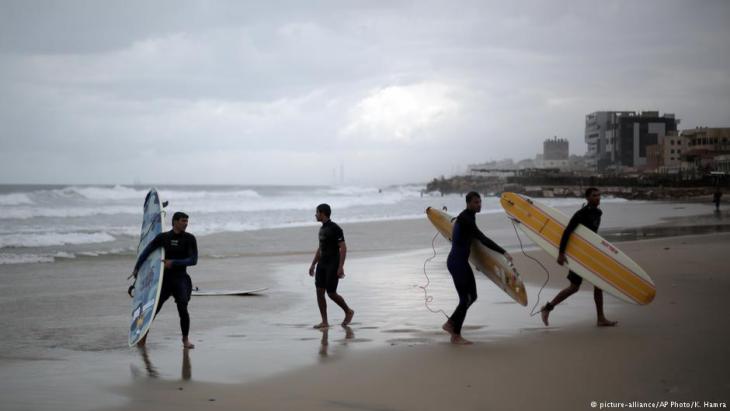 In the occupied Gaza Strip, young Palestinians get a taste of the freedom they lack through surf. Jochen Kurten met German director Philip Gnadt and producer Mickey Yamine to discuss their documentary "Gaza Surf Club"

Where did you get the idea to make a film about Gaza and the surfers' scene over there?

Philip Gnadt: I'm not a surfer myself. I've done some bodyboarding on the Atlantic coast, so I can imagine how hard it is to catch a wave. My real interest in the subject came from the region, more precisely through a friend I met in Stuttgart who was born and grew up in Gaza. He described the Gaza issue from a different perspective.

We're all familiar with the term Gaza that frequently comes up in the news. Everybody has the same diffuse image of conflicts, bombed-out houses and masked guerrilla fighters. My friend told me about how life can be between wars. That sparked my interest and led me to read up on the subject. I found the lack of a real solution quite depressing.

But then something happened…

Gnadt: Indeed. I stumbled across an article about surfers in Gaza. Finally, I thought, something different for a change! Hossam, my friend, had never heard of them either. In Gaza, one of the most isolated areas in the world, surfing is a sport that is synonymous with personal freedom. It was a really strong image. That's when I decided to make the documentary. I started doing research and got in touch with the surfers.

I had one major problem, though: I don't speak Arabic. Looking for someone who could help me out with the language and knowledge about the culture, I met Mickey, who grew up in Cairo. He was drawn to the topic immediately too. From then on, we developed it together. 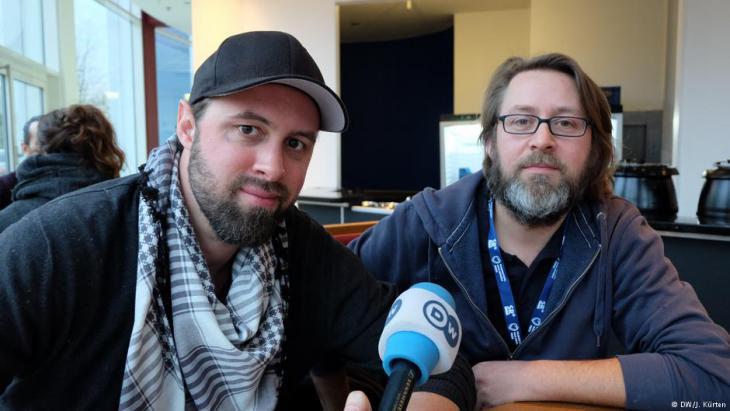 Lifting the lid on the crisis-torn Gaza Strip: director Philip Gnadt (right) and co-director and producer Mickey Yamine in interview with Jochen Kurten after the premiere of "Gaza Surf Club" at Max Ophuls-Preis in Saarbrucken last January

What made a lasting impression? What surprised you the most?

Gnadt: It may sound a bit cynical, but something that impressed me generally about the people there – not just the surfers, but everyone we met – was their positivity. As Mickey comes from the region, his take on the mentality of the people there was less dramatic. But for me, it was a complete eye-opener. As soon as I crossed the border, I felt comfortable. I had imagined it would be scary, but I felt welcome there.

Of course, we looked quite exotic. We were running around at the beach and some kids approached us, wanting to know what we were doing there. That first impression haunted me over the next six weeks. Such open behaviour of course has to do with a person's age. The older people are, the more disillusioned they tend to be. Those turning 50, 60 or 70 don′t expect much to change anymore. Young people have a different approach; they have yet to abandon their dreams. Still there was a general undercurrent of optimism which took me by surprise.

Were you able to talk openly about politics? What was the atmosphere like on set?

Gnadt: We tried to avoid pushing the political aspect: our objective was to show a different side of Gaza. But as soon as you talk to people, the conversation inevitably turns to politics. There's Israel's policy of isolation, which prevents people from moving around freely. Yet the Gazans are also suffering under the Hamas regime. Some topics were simply not addressed – especially with all the cameras and recording devices that were around. It was quite noticeable. People were careful. But nevertheless, it did work quite well as Mickey and my co-producer Stephanie Yamine could both speak Arabic, so they did the interviews...

Mickey Yamine: The interviews went well because we were able to talk to each other directly without depending on translators. Philip, the cameraman Niclas Reed Middleton, Stephanie and I would sit together in the evenings and discuss what had happened during the day and what we should do the next day. We always talked about emotions and feelings, rather than about concrete questions. That's why the interviews went so well. We were able to lift the lid on life in Gaza rather than simply receiving the stock answers our interviewees would have given to any journalist. So we were able to probe a little deeper, asking them about their dreams and how they really perceive the situation.

Of course, politics always plays a role. In Arab countries, however, there's often not much room for politics because people cannot influence them. In European democracies, it's a different story because people do have a voice and are able to influence things. In Gaza, things are different. Hamas rules there. And we met lost of people who were not fans of Hamas. Nevertheless, they have to live with the status quo without being able to change it. Voicing your opinions, especially on political issues, can be very dangerous. We witnessed a few such situations... Once one of the older fishermen flipped out cursing Hamas. The others' reactions were quite telling. They got worried the scene could be included in the film. And they asked us to keep it out for security reasons.

It's interesting that there's also a female surfer in your film, adding yet another angle to "Gaza Surf Club." How did that come about?

Gnadt: During our research, we found out that there were also a few girls who wanted to learn surfing, or who had already learnt it. In the run-up to filming, however, we were unable to contact them. Thanks to our producer Stephanie, we managed to gain the confidence of one of them. Stephanie also invested a lot of time in obtaining the trust of the girl's father, so that he would let us enter their living room and the girl's bedroom and join her on the water with a surfboard. 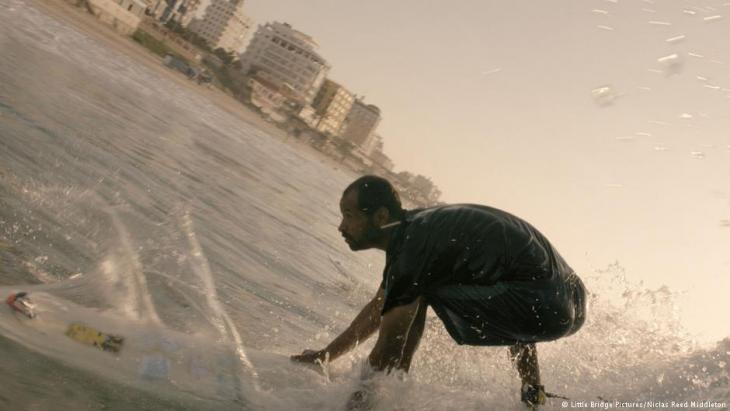 Waiting for the next big wave: "Gaza Surf Club" is not about glamour, it′s about being able to make a film about the people in a region where all the filming equipment and crew had to be imported first. The daily struggle of the surfers in the rubble-filled, overfished waters is emblematic of the fight for survival of many of their countryfolk

I presume it wasn't easy to film in Gaza. Was the project hampered by political problems?

Yamine: Fighting broke out in Gaza just as we were due to start filming. That's why we had to postpone filming and wait for the latest outbreak to be over…

Gnadt: Of course, it's also not a place you can simply travel to. It did take us some research and preparation to find out how we could enter Gaza. As Mickey grew up in Egypt, he knew about the possibility of entering via Rafah and the Sinai. That's how we did it for our first research trip in 2013.

Two or three months later, Egypt was in political turmoil and that completely changed relations between Egypt and Gaza, or more specifically Hamas. The border was more or less closed, smugglers' tunnels were blown up. The border only remained open for humanitarian purposes. The situation was very complicated.

Initially we wanted to avoid going through Israel because we thought the Israelis might have a problem with our project and the topic. Ultimately, though, it just entailed more bureaucracy. A year later we managed to enter Gaza from Erez in Israel.

German Middle East analyst Guido Steinberg and television journalist Ulrich Tilgner have both published new books on the conflicts in the Middle East. Their analyses and their ... END_OF_DOCUMENT_TOKEN_TO_BE_REPLACED

In his latest documentary, "The First 54 Years", Israeli director Avi Mograbi demonstrates how catastrophic and traumatising the occupation has been, not only for Palestinians, ... END_OF_DOCUMENT_TOKEN_TO_BE_REPLACED

"The Memory Monster" was a success for Israeli author Yishai Sarid. His latest book hasn't been published in English yet, but given his reach among Anglophone readers, it won't be ... END_OF_DOCUMENT_TOKEN_TO_BE_REPLACED

FIT TLV is the latest initiative by Tel Aviv’s youth to keep on partying during the coronavirus crisis. FIT describe themselves as "Free. Individuals. Together" – cycling, ... END_OF_DOCUMENT_TOKEN_TO_BE_REPLACED

In 2012, fed up with people expressing clear-cut opinions on the rights and wrongs of the Middle East conflict, Canadian conflict researcher and long-time Israeli resident Corey ... END_OF_DOCUMENT_TOKEN_TO_BE_REPLACED

The Islamic Republic of Iran has been subject to sanctions ever since its creation in 1979. The more the regime has entrenched itself and expanded its power in the region, the ... END_OF_DOCUMENT_TOKEN_TO_BE_REPLACED
Author:
Jochen Kürten
Date:
Mail:
Send via mail

END_OF_DOCUMENT_TOKEN_TO_BE_REPLACED
Social media
and networks
Subscribe to our
newsletter