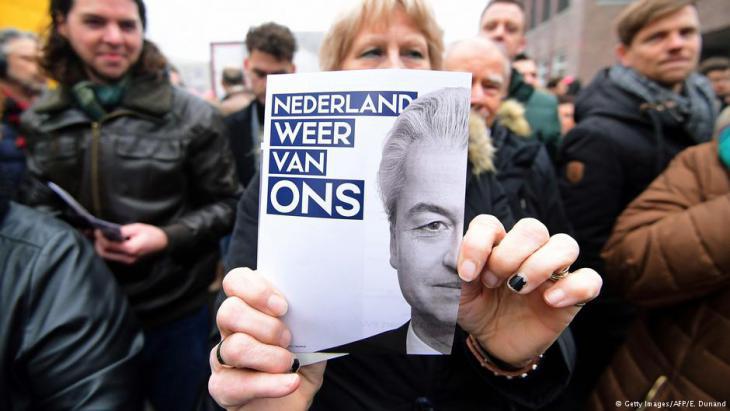 Geert Wilders and the right-wing populists

Heads they win, tails they win

Geert Wilders' far-right populist party is neck-to-neck in the polls with the governing VVD in the run-up to elections in the Netherlands next week. While it′s unlikely to be part of the next government, many people fear its ideas will be implemented. Thessa Lageman reports from The Hague

A chilly wind blows over the "Binnenhof", a complex of buildings where the parliament is housed dating back to the 13th century. A group of civil servants eat raw herring sandwiches at the kiosk in front of the courtyard as Dutch and foreign tourists stroll across the cobblestones taking pictures.

Next week, on 15 March, the Netherlands will hold its general election. The populist Party for Freedom (PVV), is currently ahead in the polls, on around 17 percent of the vote, with the Liberal party (VVD) just behind in second. The PVV′s leader, Geert Wilders, has already spoken of a "Patriotic Spring," referring to Trump′s election victory, Brexit and populist anti-immigration movements in Europe that are thriving in the polls.

"It′s frightening," says 62-year-old Marleen Breuker, an educational staff member, on a day trip to The Hague with some family members. "I hope the polls are wrong," she admits, adding that she always votes for the Green party.

Geert Wilders, also known as the "Dutch Trump" with a similar mop of unruly hair, is following Trump′s lead when it comes to his election campaign and his use of Twitter in spreading his version of the news.

"There is maybe no direct gain," says Sarah de Lange, professor at the University of Amsterdam who has written her PhD on right-wing populist parties in Western Europe. "But these things generate a lot of media attention. It gives Wilders a chance to present his ideas to the voters, repeatedly."

Chris Aalberts, from the Erasmus University Rotterdam, also specialises in populism and thinks that Wilders doesn′t actually copy that much from others. The PVV party programme is just one page, he says. "It′s very consistent. He says the same thing over and over again." He does believe, however, that Trump′s measures like his travel ban on Muslim citizens play into Wilders′ hands. "He can tell people: ′Look, someone else has done the same.′"

Aalberts wrote a book about PVV voters in 2012. Since then, he says, it has become less of a taboo to say you vote for this party; although, among the elite, most people still hide it because of their career chances. "It has especially become more acceptable to be against Islam, Muslims and immigration."

Raymon (27), who preferred not to give his surname, voted for Wilders during the 2012 elections. After a weekend in The Hague with his girlfriend, they are about to head home in the east of the country, where he works with people suffering from dementia. He strongly supports Wilders′ plans to spend more money on health care, but finds little else appealing. "Now Wilders endorses Trump and wants to get out of the EU; it′s not my party anymore," he confesses. "Also, now almost all parties don′t want to govern with Wilders: so what′s the use of voting for him anyway?"

Prime Minister Mark Rutte of the Liberal party (VVD) has also said he has no intention of governing with the PVV again, like he did in 2010 when the PVV supported a minority government. But Chris Aalberts cautions against placing too much trust in the prime minister. "Of course, his promise isn′t worth anything," he says. "Circumstances can always change." He believes the PVV won′t be part of the next cabinet for the simple reason that "they are incapable."

Raymon′s girlfriend Loes Hammerstein (22), a social affairs student, said she will probably vote for the socialist party (SP). "I′m not really interested in politics," she tells DW, but she knows she′s against Wilders. "I don′t like what he says about Muslims and refugees," she said.

"In our town, there aren′t so many of them," Raymon interrupts, "but when you walk around in Amsterdam, I can understand it′s enough for some people. But, I agree that Wilders has become a bit dangerous – too extreme." 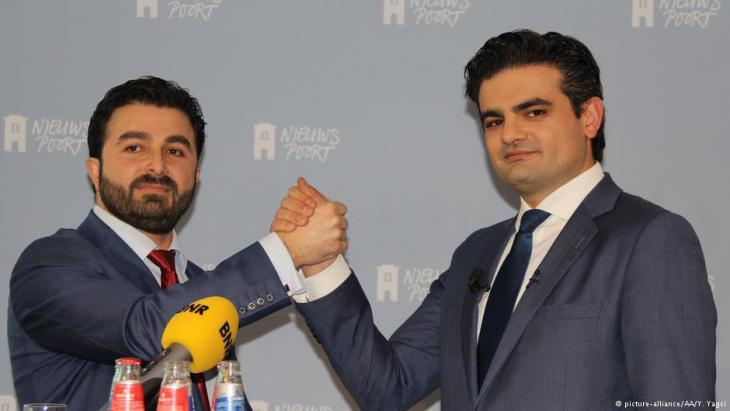 Spreading fake news and sensational conspiracy theories: for the first time, a purely immigrant party – Denk (English: Think) – is standing in the Dutch general elections. It aims to counter Geert Wilders and his anti-immigration and anti-Islam PVV party and yet the methods of both parties are similar. Just like its right-wing populist opponents, Denk is accused of polarising Dutch society

According to information provided by the election research bureau I&O Research, 77 percent of voters haven′t made up their minds yet who to vote for, while research conducted earlier this month by the daily newspaper De Volkskrant and the University of Amsterdam showed that one fifth of the voters, whose first choice wasn′t the VVD, are considering voting "strategically" for the Liberals to prevent the PVV from winning.

Marianne Maarschalkerweerd, 70, who has always voted for the Christian Democrat Appeal party, but is now thinking about 50Plus, a pensioners′ interests party, says she has her doubts about the predictions. "They say it′s between Wilders and Rutte now, but I think this is media propaganda." She believes the PVV will win many seats, which she finds "understandable," because "parties have made too many promises they haven′t kept. I don′t like to talk about refugees, but I don′t want all those young guys to come here and I do think that a stricter approach is necessary."

Researchers De Lange and Aalberts say that most mainstream parties have adopted issues from the PVV, regarding immigration, Islam and the European Union. Rutte, for example, recently published an open letter in major newspapers, warning anyone who isn′t prepared to "be normal" and accept Dutch culture, to get out of the country. "It would be electoral suicide not to move closer to the PVV now," says Aalberts, while De Lange concluded: "Irrespective of how many seats Wilders wins and whether he will be part of the government, his influence will be tangible."

Home
Print
Newsletter
More on this topic
The rise of right-wing populism in Europe: A continent dividedImmigration and the new class divide: Feeding on people's grievancesInterview with Geert Mak: A basic mood of xenophobia in the Netherlands
Related Topics
Human rights, Islamophobia, Right-wing populism
All Topics

Among Muslims, the image of women as "cossetted hijab-wearing princesses" is frequently invoked. But Muslim women have long wanted to be more. In her essay, Karoline Roscher- ... END_OF_DOCUMENT_TOKEN_TO_BE_REPLACED

Even in times of war and pandemic, refugees are still being deported to Afghanistan. Several deportation flights have taken place in recent weeks alone. Since those affected often ... END_OF_DOCUMENT_TOKEN_TO_BE_REPLACED

Surging coronavirus cases in many parts of the world have overshadowed the start of this year's Muslim holy month of Ramadan, with festivities once again curtailed by contagion ... END_OF_DOCUMENT_TOKEN_TO_BE_REPLACED

German Middle East analyst Guido Steinberg and television journalist Ulrich Tilgner have both published new books on the conflicts in the Middle East. Their analyses and their ... END_OF_DOCUMENT_TOKEN_TO_BE_REPLACED

On 27 March, Iran and China signed a 25-year accord intended to foster "strategic co-operation". Despite ongoing uncertainty over the deal's actual scope, content and chances of ... END_OF_DOCUMENT_TOKEN_TO_BE_REPLACED

END_OF_DOCUMENT_TOKEN_TO_BE_REPLACED
Social media
and networks
Subscribe to our
newsletter