Gender Roles in Iran
Between Taboo and Transcendence

How entrenched are gender roles in Iranian society? The exhibition "Naqsh – Insights into Gender and Role Models in Iran" surprises visitors to the Museum of Islamic Art in Berlin's Pergamon Museum with a multi-faceted discussion. Ariana Mirza visited the exhibition to take a look 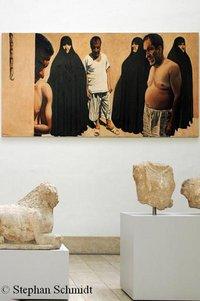 The untitled, large-format painting by Teheran-based artist Ahmad Morshedloo highlights the ambivalence of the proximity and distance between the sexes

But the "Naqsh" exhibition does not revolve solely around the construction of femininity. The word Naqsh in Persian means image and model as well as role.

Therefore the exhibits also explore the general processes of identity formation and the ambivalences inherent in gender relationships. Those who expect new interpretations of Oriental myths or vehement criticism of Islam from the Iranian artists, however, will be disappointed. What emerges instead is the realisation that the exploration and challenging of gender roles is not exclusively Western.

What also becomes apparent is how lively and controversial the discussion over role models actually is in Iran itself as well as in the Diaspora. Berlin resident and artist Ali Reza Ghandchi and Teheran resident and sculptor Maryan Salour enter into an artistic dialogue: a bronze sculpture of a body representing female fragility is defiled by a male hand in a video installation, and beaten in shackles.

​​At least, this is how the viewer perceives it. Would the interpretation be the same if a female hand were touching the sculpture?

Although the topic of the exhibition is inspired by socio-political events, many of the exhibits are also aesthetically impressive. The works of Parastou Farouhar and Bita Fayyazi admirably complement the space. The tones of Fayyazi's baby figures are mirrored in the rug ornaments from ancient Persian civilisation that decorate the walls of the Museum of Islamic Art. Aptly titled, Fayyazi's work "Creche" points to the collective as a defining element of gender assignment and repression of individuality.

Interpretations of masculinity and femininity

Forouhar's photograph series "Behnam", on the other hand, plays with codes of perception. Her light, airy photo installation takes the visitor back to their own interpretations of masculinity and femininity.

Teheran resident and painter Ahmad Morshedloo contributed to Naqsh a disturbingly clear image of the alienation between the sexes. Despite their spatial proximity, the Iranian man and Iranian woman in Moshedloo's paintings are not in relationship. No matter in which intimate, domestic space the painter places them, they appear isolated, monolithic.

Shirin Homann-Saadat, the only participating artist who grew up in Germany, explores the environment housing the exhibition in an ironically playful manner. Her "Archaeology Box 003/Iran" has salvaged artefacts and fragments from the biography of a woman archaeologist from the early 19th century, presented in a "typical museum" manner.

The exhibition brings together in an interdisciplinary manner the various strands of the discussion about the manifold roles and identities of the sexes at a number of levels: art, science, and life

​​The initial confusion arises from the realisation that freedom, female self-determination, and a life in harmony with nature were only possible among the nomadic tribes in rural Iran. This artistic "field research" follows various themes up to the present: the raw materials that are so abundant in Iran play a role in Hohmann-Saadat's fiction as well as the treatment of Western "women's illnesses" and modern computer technology.

The presentation of the academic-sociological part of the exhibition is just as multi-faceted and diverse as the art. In audio interviews secular feminist Mansoureh Shojaee and Islamic-oriented feminist Elaheh Koolaee explain their positions. The feminist discourse is supplemented by the intimate account of an Iranian transsexual, whose name remains anonymous for security reasons. And not least of all, intellectuals living in exile discuss their views on gender in Iranian society in film interviews. Emotions and ideas on gender relations that inspired the works of art are here placed in a socio-political context.

The exhibition NAQSH can be seen through September 7 in the Museum of Islamic Art located in Berlin's Pergamon Museum.

Laleh Seddigh
Donning a Headscarf in the Cockpit
Laleh Seddigh is the star of Iranian car racing. The 30 year old driver had to fight hard to be accepted in the profession. Fatma Sagir met the young woman in Tehran

Islamic Feminism in Iran
Equality at Half Mast
Zanan Magazine, a reform-minded feminist magazine in Iran, has been active in promoting women's rights for the last 16 years. Now authorities revoked its license. Margot Badran on Zanan's so-far achievements

END_OF_DOCUMENT_TOKEN_TO_BE_REPLACED
Social media
and networks
Subscribe to our
newsletter