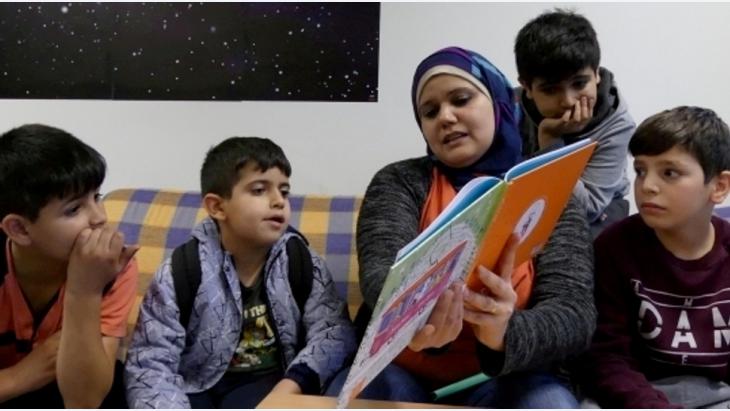 Friendly trams and wandering frogs: the Goethe-Institut is using children′s books in German and Arabic to make it easier for young refugees and their parents to come into contact with the new language and country. A visit to a refugee shelter in Berlin shows how well the “Einfach lesen!” project is being received. By Patrick Wildermann

In the book room at the refugee shelter, seven children have gathered about Amena Ragess, including her ten-year-old son Farouk. They are listening raptly and attentively to the story of a tram that got tired of its bland everyday routine and decides to break out. On the way to a forest, it picks up animals – a rooster, a donkey and a cat.

Amena Ragess and the children imitate the hee-haw and meow of the animals together. Then Farouk reads a passage in Arabic aloud. It′s not unusual to hear stories at the refugee shelter in Berlin′s Reinickendorf neighbourhood. Twice a week, every Wednesday afternoon, volunteers from the ′Willkommen in Reinickendorf′ initiative come here to read stories from German children′s books aloud to the young refugees. What′s new is that now the children also have the chance to settle into a new country in their own language. 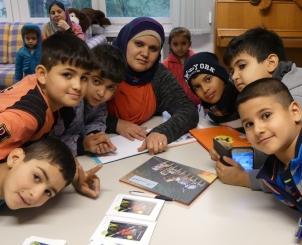 Stories that fascinate: " The protagonists are optimistic and face their adventures – that helps the children," says Susanne Hermenau who works in the Reinickendorf refugee shelter. The books selected convey universal values like friendship and helpfulness

The Goethe-Institut and the Verlag Hans Schiler publishing house have brought out a six-part German-Arabic children′s book series under the motto ″Einfach Lesen!″ (Just Read!). They have published bilingual editions of classics like ′Die ganz besonders nette Strassenbahn′ (The Very Friendly Tram) by James Kruss, Paul Maar′s ′Einer mehr′ (One More) and Ernst Jandl′s ′funfter sein′ (English title: Next Please). They are easy-to-read, colourfully illustrated stories that can help both young listeners and readers understand their new home and relate to their own experiences.

When asked which of the books he likes the most, ten-year-old Farouk points to ′The Most Marvellous Place in the World′ by Jens Rassmus. It tells the story of a frog who is no longer safe in his pond and who, in his search for a new home, encounters animals, some of which are not friendly. ″I like it that the frog travels so much,″ Farouk explains. He also likes James Kruss′s friendly tram, he says, ″Because I take the tram to school.″

Trek across many mountains

Farouk attends the Welcome Class at a primary school in Reinickendorf and already speaks German well. ″We learn science, German and maths,″ he says.

Farouk and Amena Ragess are from Damascus. His father is still there. The mother and son fled to Germany via Turkey, Greece, Albania, Serbia and Austria. ″We walked across many mountains,″ Ragess says, describing the arduous journey. They finally crossed the German border on 18 May 2015 – she remembers the date very well.

A few weeks later they arrived in Berlin. They now know the city quite well, reporting about Alexanderplatz and Zoo. Yet most of their experiences so far have been limited to the inside of the refugee shelter where 900 people, including 200 young children, live in four buildings. 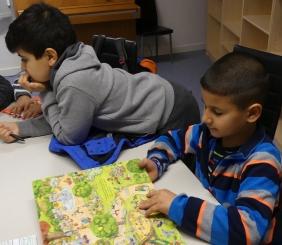 An oasis of calm: many children enjoy the reading sessions and discover everyday elements in the stories they hear. ″I like it that the frog travels so much,″ says ten-year-old Farouk about the questing frog in Jens Rassmus' ′The Most Marvellous Place in the World′

What image of Germany do the bilingual books convey? Amena Ragess, 39, who taught social studies in Syria, pauses to think. ″You see a lot of the landscape, the mountains and forests. You notice that Germany is a diverse country,″ she responds. Ragess herself likes Paul Maar′s book ′Eine gemutliche Wohnung′ the best.

It describes a home that has a kitchen and a washing machine, reminding her of life in Damascus. Susan Hermenau, who works for Prisod Wohnheimbetriebs GmbH, which operates the refugee home, is delighted that in the books ″travel and new beginnings are related so positively. The protagonists are optimistic and face their adventures – that helps the children.″ In addition, the books transport universal values like friendship and helpfulness. ″Cultural differences that they reveal don′t alienate them, but unite,″ Hermenau believes.

The parents are involved

The Goethe-Institut′s book package – one of 300 that were sent to initiatives and facilities for refugees thanks to a donation from the Japan Art Association – has only been in use in Reinickendorf for a short time. Amena Ragess is one of the first mothers to read from the bilingual books. Yet Hermenau is already observing that the children react extremely positively to them. They enjoy the attention and are able to calm down in the midst of the noisy shelter routine, ″without anyone exoticising them or labelling them refugee children.″ 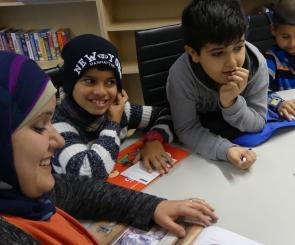 Before she fled Syria, Amena Ragess was a social studies teacher in Damascus. In Berlin she is one of the first mothers to read from the bilingual books – to a rapt audience!

Reading aloud is also a very positive experience for the parents, because there is no language barrier to overcome and it boosts their self-confidence. ″We particularly value these kinds of programmes because they give our residents the opportunity to be proactive,″ says Hermenau.

In addition to the book package, audiobooks read in Arabic are also available, including classics like ′The Little Witch′ by Ottfried Preussler and Cornelia Funke′s ′The Thief Lord′. This project is called ″Einfach Horen!″ (Just Listen!). Postcards with the QR codes for the podcasts were distributed in the Reinickendorf facility.

It is hard to assess how many residents are making use of them, however, as a device with Internet access is needed and not everyone has access to one. At any rate, the children′s books, as Amena Ragess explains, ″help learning German because they′re written in simple language.″

When they arrived in Berlin she and her son did not speak a word of German. While the mother is now attending a course to improve her skills, her son Farouk is making great progress at school. He can also tell the story he liked to hear most in Syria in simple German. It is called Leila and the Wolf; known here as ′Rotkappchen′ or Little Red Riding Hood.

German Middle East analyst Guido Steinberg and television journalist Ulrich Tilgner have both published new books on the conflicts in the Middle East. Their analyses and their ... END_OF_DOCUMENT_TOKEN_TO_BE_REPLACED

On 7 March, Switzerland became the latest European country to vote in favour of a so-called "burka" ban. It was yet another feather in the cap of the right-wing populist Swiss ... END_OF_DOCUMENT_TOKEN_TO_BE_REPLACED

Syrian-born Rafik Schami is a gifted storyteller and one of the most successful authors writing in German today. In his 50 years in exile in Germany, he has introduced the Arab ... END_OF_DOCUMENT_TOKEN_TO_BE_REPLACED

The Syrian war has moved through many phases and included a number of changing actors. But one aspect has remained constant throughout: the Assad regime is using the conflict to ... END_OF_DOCUMENT_TOKEN_TO_BE_REPLACED

It's no secret that the Baha'i community in Iran is persecuted. Now, a document has come to light that appears to show the extent to which the repression is state-sponsored. By ... END_OF_DOCUMENT_TOKEN_TO_BE_REPLACED
Author:
Patrick Wildermann
Date:
Mail:
Send via mail

END_OF_DOCUMENT_TOKEN_TO_BE_REPLACED
Social media
and networks
Subscribe to our
newsletter