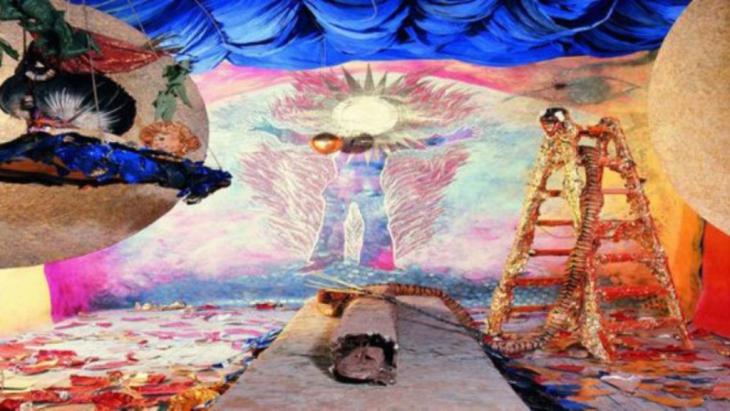 Arabian prince, magician, master of ceremonies and traveller between worlds: Michael Buthe (1944–1994) was one of the most vivid personalities of the German art scene, dividing his time between Cologne and Marrakesh during the 1970s. A portrait by Natalie Goltenboth

″A few centuries ago, a wondrous encounter took place in Samarkand, which was ruled by a wise king who generously and benevolently fostered the arts at his court …,″ writes Buthe in his Hommage an einen Prinzen aus Samarkand (′Homage to a prince from Samarkand′) in 1977. This fairy-tale world corresponds to the spatial installation of the same name that one enters as if it were a treasure-chamber from ″A Thousand and One Nights″: a fragrant interior, shimmering in red, with heavy fabrics, glittering, feathered objects and a golden sun disc, as if put aside there by chance.

In this interior space, created in 1977 in the Kunstmuseum Dusseldorf, one could linger, immerse oneself, or go on playing as one touches, smells and feels, enveloped by an inviting world of the senses, liberated from practical constraints, considerations of profit and other pipe dreams of western adulthood.

Michael Buthe′s work creates a vital narrative atmosphere in which colours, signs and found objects from everyday life from his own and foreign cultures are arranged into mythical symbols and play worlds. Colours, signs and forms sweep one away into the world of ″Michel de la Sainte Beaute″, as Buthe, who occasionally made his appearance in eccentric feathered headgear, named himself.

Starting in the 1970′s, Buthe lived between Cologne and Marrakesh and – much like his contemporary Joseph Beuys – was seen as a wanderer between worlds. In the exhibition in Munich′s Haus der Kunst, fabric pictures, drawings, assemblages and spatial installations thus call on the viewer to set off on this journey, to open up an inner orient – for which the artist′s locus of desire lends itself as playing surface.

In the installation Taufkapelle mit Mama und Papa (′Baptismal chapel with Mum and Dad′) which Buthe created in 1984 for his exhibition Inch Allah in the Stedelijk Museum in Ghent, a large ashlar covered with wax forms the centre. Liquid gold paint lies on its surface – as if in a baptismal font. Around it a separate open space was created with expressively painted room-dividers, cardboard objects and objects from everyday life. A ritual space, religious area, but also an improvised play surface, on which the objects are left behind as vestiges of an operation. In any case, an aura of process, of improvisation surrounds the installation that allows the viewer freedom.

Many of Buthe′s works are conceived in terms of process, are relics of his installations and rituals, or were continually developed over the years. For instance, the work Boulli Africaa: a arrangement formed out of a wide range of objects from the African continent whose point of departure was a pair of shoes that Buthe was gifted by a friend from Senegal.

Places of longing and oriental playrooms

In view of the artist′s at times opulent, often also contemplative and meditative, but always exotic pictorial language, the question of the manner in which ″the oriental″ is processed in Buthe's work arises.

American literary theorist Edward Said stigmatised the orient as a creature that had arisen from the west′s very own fantasies and defence mechanisms. To be sure, artistic apotropaic magic against the everyday world of the occident, experienced as compulsively rational and violent is surely one motif, but both in his oriental self-presentation as well as in the intensity of his pictorial approach it is evident that Buthe conceives the foreign as an integral element of his own position.

And thus it is his utterly own rituals, signs and stars from which Michael Buthe forms and paints his cosmology. This cosmology is not only exotic, it also represents a system of values in which spirituality, play and dealing with the unpredictable are avowed as potentials of our humanity.

Plumbing the depths of his own being

Buthe′s last large-scale installation clearly shows that his main concern was the study and plumbing of his own being. In the 14 copper plates of Die Heilige Nacht der Jungfraulichkeit (′The holy night of virginity′), man appears as a mysterious being, caught between the ″Voraugenblick des Gezeugtwerdens und dem Nachaugenblick des Ersterbens,″ – the moment before conception and the moment after the dying of the light.

It is here that Buthe emerges into visibility as an artist intensely focused on spirituality and religious practice – above and beyond exotic poses. These experiences are conjoined with the artist′s journeys into the heart of an inner Marrakesh experienced as real.

Elke Muller is fighting for her daughter Anna, who fell in love with a young Afghan and converted to Islam. The mother spoke to Esther Felden about feeling alienated and her fear ... END_OF_DOCUMENT_TOKEN_TO_BE_REPLACED

As historian Wiiliam Dalrymple writes in his essay, scholars are only now beginning to realise the extent to which the Mughal emperors adopted what most would assume to be ... END_OF_DOCUMENT_TOKEN_TO_BE_REPLACED

There's not much to see yet, but it's clear that Cologne will be home to a new museum dedicated to migration. The government will provide funding to see the Central Museum of ... END_OF_DOCUMENT_TOKEN_TO_BE_REPLACED

Unable to travel to Munich to attend the presentation ceremony for his Geschwister-Scholl Prize, writer Ahmet Altan penned a message against hatred and nationalism from his prison ... END_OF_DOCUMENT_TOKEN_TO_BE_REPLACED
Author:
Natalie Göltenboth
Date:
Mail:
Send via mail