From Class to Race

The greater the gulf between rich and poor in Germany, the sharper the tone in the country's debate on integration. So much so that the likes of politician-turned-banker Thilo Sarrazin can now drum up support through crude racism. Daniel Bax comments 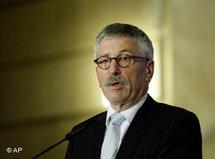 Pseudo-intellectual rant? According to a survey, 51 percent of all Germans agree with Thilo Sarrazin's theory that Turks and Arabs are incapable of integrating

​​For Berliners familiar with Thilo Sarrazin from his time as the city's finance senator, the debate on his latest "scandalous interview" has taken a surprising turn. In his years in office in Berlin, Sarrazin was an infamous figure – his provocative statements on civil servants or benefits recipients were often entertainingly malicious, but they never had a reputation for being particularly clever, let alone compatible with majority opinion.

Sarrazin was seen as a kind of Jim Carrey of local politics – a man with a big mouth who didn't have to be taken seriously. He was somehow a perfect match for the city of aggro-rappers Sido and Bushido. And now this hot-air machine, of all people, is supposed to have set the ball rolling for a serious integration debate? Thousands of heads are shaking in disbelief.

"Neither willing nor capable of integration"

In the previous instalment of our political soap opera: in an interview with the cultural magazine Lettre International Sarrazin had stated that Turkish and Arab immigrants were less well integrated in Berlin than other groups such as Vietnamese and ethnic Germans from Russia – whereby a nationwide study recently came to a similar finding.

Newly appointed to the board of the Bundesbank, Sarrazin had also speculated on the possible reasons for this situation, however – and to put it mildly, he left the realms of empiricism as he did so. He fabulated for instance that seventy percent of Turks and ninety percent of Arabs in Berlin were "neither willing nor capable of integration," putting this down to a "mentality" that he called "aggressive and atavistic".

Apart from this, he added in his pseudo-intellectual rant, human intelligence was partly hereditary, which was why it was a disadvantage for Berlin that the lower classes – and particularly the Turkish lower classes! – had so many children.

It was not just the colloquial language in which Sarrazin picked on Turkish greengrocers and women in headscarves that prompted horrified reactions. Overall, the dismay was sparked off by the racist worldview that shone through at several points as the interview continued. 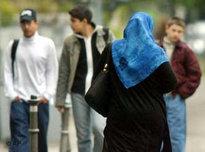 Since more and more migrants have been demanding participation in German society, the middle classes have begun to feel unsettled by the country's increasingly multi-ethnic make-up, fearing for their privileges and lifestyle, writes Daniel Bax

​​Sarrazin not only blustered like a Serbian right-wing extremist that "the Turks are taking over Germany just like the Kosovars took over the Kosovo: through a higher birth rate," only to add a sarcastic comment to the tune that he'd be happy "if they were eastern European Jews with a 15 percent higher IQ than the German population" (did he measure those comparative IQs himself?).

He also expressed his support for radical political solutions: "no more spouse immigration, and any (non-German national) who wants to marry should do it abroad," plus "no more benefits for immigrants in the long-term future". No wonder Saxony's extreme-right NPD party slapped its collective thigh and recommended Sarrazin for the office of integration tsar, even though he had rounded off his anti-Islamic tirade with a pinch of philo-Semitism.

The shocking thing is not that the likes of Thilo Sarrazin can express such crude ideas. What's more frightening is that a majority of the Germans appears to have no problem with his statements, even agreeing with him. According to an Emnid survey (for the Bild tabloid), 51 percent of all Germans agree with Sarrazin's theory that Turks and Arabs are incapable of integrating. And according to a highly slanted television talk show, a whole 81 percent agreed that it was perfectly alright to "put things as drastically as Sarrazin did".

The only remaining hope is that many of those surveyed had not read exactly what Sarrazin said in the interview, especially as most media only quoted the more harmless passages. Yet this is not a good sign for the way Germany reacts to racism – when it is articulated by a banker in a suit rather than a skinhead in a bomber jacket.

All Thilo Sarrazin is doing is adding a particularly loud and obnoxious chant to the choir of voices blaming society's losers for their own situation. The most terrifying prospect is that debates of this type, about alleged refusal to integrate and "sponging off the state", will become more frequent and more heated in the years ahead, when Germany's newly elected conservative-liberal government implements its threatened cuts to the social welfare safety net. 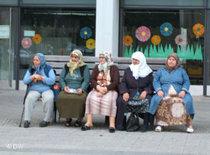 Hereditary parallel society? According to Thilo Sarrazin the fact that
so many Turkish and Arab immigrants cannot achieve social mobility is a matter of genetics

​​People on benefits simply haven't tried hard enough in life, the saloon-bar philosopher Thilo Sarrazin would have it – a man from a comfortable upper middle-class background who would like to believe that this privilege is all of his own making.

The new aspect is that the Bundesbank man has extended his class theory to cover race issues: it is not down to the German education system and a lack of opportunities, he claims, that so many Turkish and Arab immigrants cannot achieve social mobility, even in the third generation – it is a matter of culture and genetics! (In this respect, Stephan Kramer from the Central Council of Jews is perfectly right to see Sarrazin in the tradition of Hitler and Goebbels, although his comparison is otherwise a little exaggerated.)

And there is another new side – the fact that this salon racism falls upon open ears in the middle classes. Previously, these circles had either simply ignored immigration or felt safe in the illusion that racism was only a problem among East Germans and the plebs. But since more and more outspoken migrants have been demanding participation in German society, the middle classes have begun to feel unsettled by the country's increasingly multi-ethnic make-up, fearing for their privileges and lifestyle.

Radical rejection of any chance of social mobility

The Social Democrats would do well to expel Sarrazin from their ranks as quickly as possible. The politicians Martin Hohmann and Henry Nitzsche were thrown out of the conservative CDU for similar reasons. To top it all, Sarrazin's radical rejection of any chance of social mobility through education goes against everything the Social Democrats have ever stood for.

His comment on Berlin's "educationally poor" classes was that there was "no possibility to integrate these people sensibly" and that he did not believe in integration through education. This sentiment echoes the ideas of the 19th-century upper middle class on the lumpen proletariat.

In a party founded on the educational careers of the likes of August Bebel and Willy Brandt, Gerhard Schröder, Frank-Walter Steinmeier and Sigmar Gabriel, all of whom worked their way up from modest beginnings, Thilo Sarrazin's snobbery is a bad joke.

Daniel Bax is an editor for the opinion section of the taz newspaper and writes on integration, immigration and Islam.

Translated from the German by Katy Derbyshire.

Navid Kermani on Islam in Germany
A Plea for Cultural Pluralism
The writer and Islamic scholar Navid Kermani has written a refreshingly calm affirmation of the notion of a multicultural society. Ulrich von Schwerin has read the book

Interview with Seyla Benhabib
The Guest is Always a Fellow Citizen
The philosopher Şeyla Benhabib has identified a deficit in Germany's democracy. She calls for the right to vote in local elections for non-nationals – and the same legal status for Islam as for other religions. An interview by Deniz Utlu

END_OF_DOCUMENT_TOKEN_TO_BE_REPLACED
Social media
and networks
Subscribe to our
newsletter