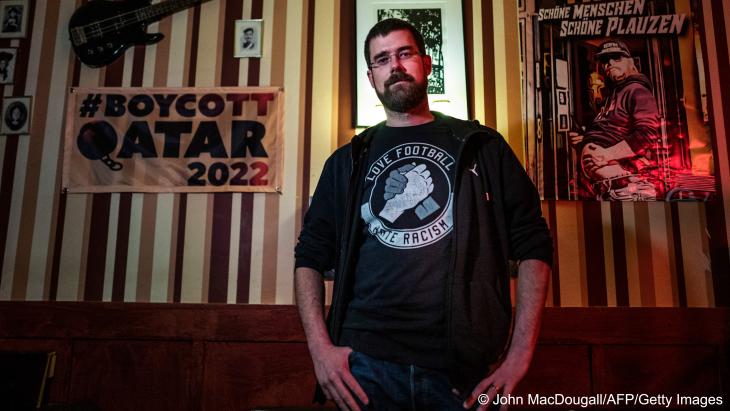 When Germany kick off their Qatar World Cup campaign against Japan next week, the projector screens at Berlin's Fargo football bar will be in their unusual rolled-up position. The bar, which tailors its regular opening hours to the football schedule, will not even open its doors until an hour after the match is completed.

"We do not agree that the World Cup should take place in a country where the purpose is obviously sports washing and to make the country look different internationally than it actually is," said Fargo spokesperson Joschik Pech. "We would not feel good having fun watching the games when we know (it's a place) where (a person's) sexuality cannot be lived out freely."

Fargo is one of dozens of bars across Germany, including several in the capital of Berlin, which have pledged to boycott what is normally a showpiece event in the football-mad nation.

Qatar's treatment of migrant workers, women and the LGBTQ community has come under the spotlight as it prepares to host the tournament. Qatar has angrily rebuffed most of the attacks. The chief World Cup organiser said attacks on the Gulf state had been launched because it "competed as equals and snatched" the World Cup from rival bidders.

Several other sites, including Berlin's famous 'Fan Mile' against the backdrop of the Brandenburg Gate, have cancelled public viewing events, officially due to concerns surrounding the weather, energy costs and risk of COVID infections. Members of Germany's activist football fan culture have been particularly outspoken about the event, with supporters of several high-profile clubs including Bayern Munich, Borussia Dortmund, Union Berlin and St Pauli urging boycotts.

Not wanting to simply ignore the month-long tournament, Fargo will hold several events parallel to World Cup matches, including human rights lectures and group trips to amateur and women's football matches. "We expect that there will be a loss of sales and of course a loss in profits, but we don't think it will be so bad that the pub will go bankrupt," Pech said.  "We are also trying to get people to the bar with our alternative programme, which I think will attract some people."

Fargo's decision is not an unpopular one among customers. Sebastian, 24, a self-described "active football fan" said he supported the boycott and would do the same.  "I would like to watch it, but I won't," adding that "up until this point I've watched every World Cup played in my lifetime."

"When people are freezing in their own apartments because of the energy policy situation here in Germany, watching a tournament played in artificially cooled stadiums, that's unacceptable."

Another Fargo customer, Stella, said she would also boycott the event for the first time, saying she hoped fan sentiment would force people to think more critically about World Cup hosts. "I find it a little difficult that this is the first year where people recognise the problems… People should have actually recognised the need to boycott certain places and certain World Cups much earlier."

The 22-year-old however said she remembered previous World Cups fondly and knew she may be tempted to change her mind. "I can imagine that if Germany somehow made it to the final and my friends called me and said 'hey Stella, we're going to go and watch it', I might find it difficult to say no, because it's pretty cool to watch it with your friends.

"But I don't expect we will play well at all – so I don't think it will be a problem," she said with a laugh.

"Each person can decide"

Some bars such as Berlin's Tante Kaethe have decided to show the games, but want to use the heightened exposure created by the tournament to shed light on human rights abuses, for instance by hanging a photo exhibition showing the poor living conditions of Nepalese guest workers who helped build Qatar's stadiums. Others have pledged to show the event.

Around the corner from Fargo, Salama El-Khatib, the owner and manager of the eponymous Salama's Bar, said "each person can decide for themselves" if they want to watch. "I'll be showing all the games, from when it starts at 11am to 8pm, no exceptions," said El-Khatib.

El-Khatib, who came to Berlin from the Middle East to study in the 1980s before opening his bar in 1996, said "questions of human rights (in Qatar) were discussed often" by him and his customers, but he had not considered a boycott. Salama said "five or six regulars" will skip the event, "but other guests will be here".

END_OF_DOCUMENT_TOKEN_TO_BE_REPLACED
Social media
and networks
Subscribe to our
newsletter