Insoluble deadlocks and a deep-seated lack of perspective give rise to anger, hatred and disappointment. Like termites, these feelings devour humanity and civil society.

Some people turn this anger and hatred into political capital. With their lurid slogans they pour oil on the fire and spread anger and revenge, which spread through the social networks at lightning speed. The others trivialise the crisis and create illusions under the motto "reformability of the regime". They constantly warn, plead for lazy compromises and spread poverty and hypocrisy. And neither the one nor the other can alleviate the suffering of this society. They are not a solution, but part of the crisis.

In the past few weeks, my parents’ house in Tehran has been broken into three more times. Since it is hardly possible to break in through the courtyard and the entrance to the house, the perpetrators took other paths. The first time they climbed down with a rope through an 80 centimetre-wide skylight and went out again. The skylight was then cemented over. 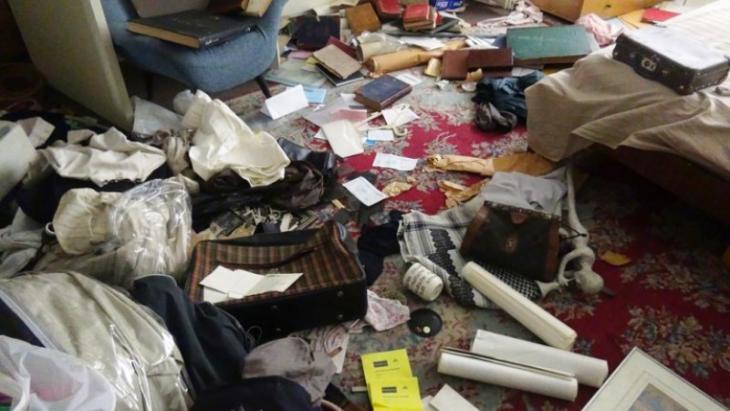 Renewed traces of devastation: when Parastou Forouhar received news of repeated break-ins into her parents' home, the courageous artist travelled to Iran without further ado. The series of burglaries continues to this day. Forouhar's parents were opposition politicians and were murdered in Tehran in 1998

The second time, the burglars were just bending the window grille of the balcony on the upper floor when a neighbour called the police. They came half an hour later. A second row of grilles was then installed along the row of windows.

The most recent burglary was through a small barred window next to the door to the roof that was torn out of the masonry. The window was then bricked up.

We have had to fence the house, which is supposed to commemorate the ideals of its former inhabitants and their struggle for freedom, with more bars, and lock its doors with more and more locks. What a cynical contradiction.

Screenshots instead of writing

For years I have been taking notes, short sentences to record situations and comment on them. Now I just make screenshots. The news is so terrible that I can no longer react to it with words. Only they themselves can reproduce their content. Only they themselves are the proof of their existence.

One of these screenshots shows a large hole filled with a little cloudy water. Pipes with a diameter of about 30 centimetres protrude from the water, like tubes of a medical device out of the body of a sick person. Some men are sitting in the hole. Their hands and feet are in the water next to the pipes.

The men are probably trying to push the pipes even deeper into the hole to pump out more water. Around the hole are tractors, implements and other men. A symbol of the apocalypse. A symbolic image for me of how life is being sucked out of the land. 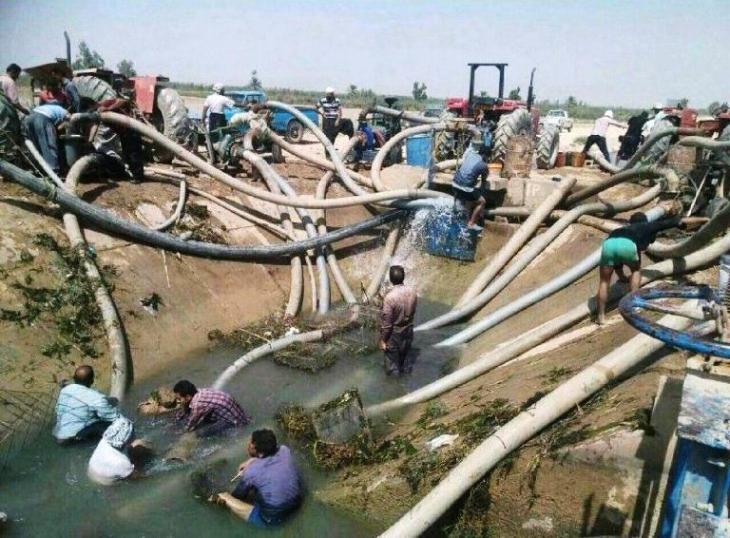 Symbol of the apocalypse: "Pipes with a diameter of about 30 centimetres protrude from the water, like tubes of a medical device from the body of a patient. Some men are sitting in the hole. Their hands and feet are in the water next to the pipes," writes Forouhar

"A dark abyss threatens our national existence." My mother, Parvaneh Forouhar, said this sentence 23 years ago in her lecture at the annual meeting of the Foundation for Iranian Women’s Research. Two years later she was killed. And we are still in the abyss she referred to.

A few weeks ago I attended this year’s meeting of the foundation. The memories of my mother and her lecture were omnipresent. I love this lecture in which she contrasts the simple beauty of her ideals with the abysses of reality. It has always inspired me, as has she.

Another of my screenshots shows the muddy, wet masonry of a building in a flooded city. On the wall is written in red: "Your smile breaks the standstill of the city. Laugh, and I’ll rebuild the city."

The suggestive power of these verses frees thoughts from the destructive reality of flooding. Through his message, the author gives us a ray of light that warms us up. Whether he can rebuild the house and the city or not, he preserves something that is like an apparition of goodness. Like the knitting of those condemned to death shortly before the loss of their lives, which they make for their loved ones to capture beauty. 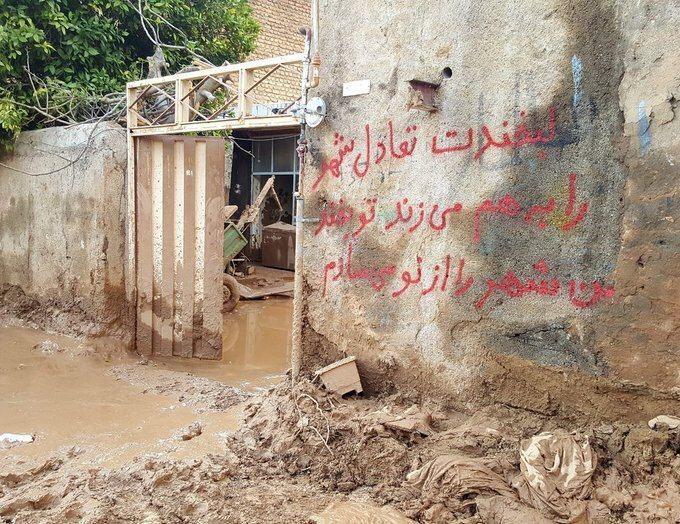 "Your smile breaks the deadlock of the city. Laugh, and I'll rebuild the city" – liberating thoughts distract from the destructive reality of the floods in Iran

Last year, during my trip to Iran, a young woman unknown to me visited me one afternoon. It was a Thursday: the day on which I open my parental home to visitors during my stays in Tehran.

The young woman gave me a book: the translation of "Exorcising Terror: The Incredible Unending Trial of Augusto Pinochet" by Ariel Dorfman. The book inspired her and strengthened her hope for justice, she told me. I should know that sometimes she thinks of me and appreciates my commitment to justice. The book should cheer me up so that I don’t give up.

When she wanted to leave, I asked her what she did for a living. She said she earned just enough from her job to make a living from it. She was a poet. She paints life in her poems. She does her best to be a good poet.

The young woman said that each one of us should take responsibility with body and soul, honesty and steadfastness. She said if there was any way out, it would be through such an approach. By those who preserved their humanity and did not stop seeking it among others.

The flame of hope for justice and freedom

When I came back to Germany, I got the same book as a gift from a friend living in exile from another end of the world. Her sister from Tehran had written a note in the book: "with thanks to those who keep the flame of hope for justice and freedom in their hearts and in the hearts of others and save the collective conscience of the country".

In the past weeks and months, when the crisis has been rampant and its calamities have been wreaking havoc, I have often thought of these young women and held on to their brave attitudes. I hope that the number of such Iranians and the sum of their forces will be large enough to lead us through these dark times and safely out of them, so that we can escape from the "dark abyss".

In her speech 23 years ago, my mother spoke of her hope for "human togetherness". I try to hold on to this hope.

On 24 November 2019, the International Consortium of Investigative Journalists (ICIJ) – along with 17 media partners from 14 countries around the world – published the "China ... END_OF_DOCUMENT_TOKEN_TO_BE_REPLACED

The refugee crisis on Turkey's borders can only be resolved with a new EU deal. It should build on the current plan, but avoid its flaws, writes Ozgur Unluhisarcikli of the German ... END_OF_DOCUMENT_TOKEN_TO_BE_REPLACED

Children’s books shape the way we see the world as we grow up. In recent years calls have been growing for European publishers to reflect the increasing diversity. By Sonja ... END_OF_DOCUMENT_TOKEN_TO_BE_REPLACED

Germany and other member states of the European Union are for the first time making use of the so-called INSTEX mechanism to circumvent the sanctions imposed on Iran by the United ... END_OF_DOCUMENT_TOKEN_TO_BE_REPLACED

The coronavirus pandemic has disrupted social and economic life across the globe. But in the Middle East, authorities have coupled religious edicts with public health advice to ... END_OF_DOCUMENT_TOKEN_TO_BE_REPLACED

In the face of COVID-19, we need to admit the political mistakes of recent years and adjust our trajectory according to the compass of reality. People around the world – ... END_OF_DOCUMENT_TOKEN_TO_BE_REPLACED
Author:
Parastou Forouhar
Date:
Mail:
Send via mail

END_OF_DOCUMENT_TOKEN_TO_BE_REPLACED
Social media
and networks
Subscribe to our
newsletter