What Waßmuß found in Iran, and what he actively participated in with his own ideas, was an anti-colonial uprising that opposed an imperial power. Of course Wilhelm Waßmuß was also the envoy of a European empire and as such the unconditional representative of German interests. But his Iranian fellow combatants did not see him as the agent of a world empire. To them, empire was above all the preserve of the British and the Russians. It wasn't German troops of occupation that were marauding in the towns and villages of Iran, but British and Russian troops who had already divided the land among themselves.

Waßmuß cannot therefore be used to declare the then Iranian uprising against the British colonial power as an Islamist rebellion aimed at establishing a caliphate. Nor is it appropriate for German authors who think in "nationalist" terms to attempt to instrumentalise him to serve their own interpretation of history. On 23 December 1918, Waßmuß wrote in his diary: "Yesterday evening I pondered what the outcome of the war would be. The death of racial prejudice, I hope".

Cat and mouse with the Brits

Waßmuß was active in southern Iran for four years. His flexibility, bravery and trickery are remembered in countless stories and rumours that are still told today. It is almost impossible to tell truth from legend. 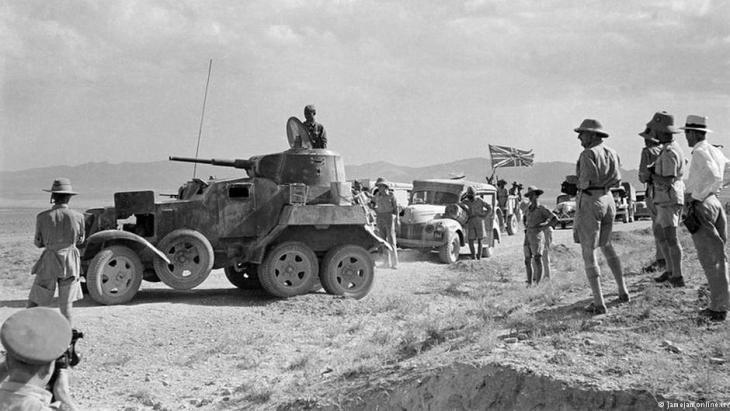 "Ultimately, the revolt against the British in southern Iran failed and Waßmuß fell into British captivity. The unrest continued. The British, however, were unable to connect their Indian colony via the south of Iran with Arabia, where Lawrence was at work. Seen in this light, the young German did at least achieve a degree of success, despite the fact that Germany lost the First World War in Europe," writes Ali Sadrzadeh

Ultimately, the revolt against the British in southern Iran failed and Waßmuß fell into British captivity. The unrest continued. The British, however, were unable to connect their Indian colony via the south of Iran with Arabia, where Lawrence was at work. Seen in this light, the young German did at least achieve a degree of success, despite the fact that Germany lost the First World War in Europe.

Years later, Waßmuß was released from British captivity. In the years that followed, he fought in vain with German authorities for the release of funds that he had promised to the Persian soldiers for their participation in the resistance against the British. In 1924 he returned to Bushehr, where he bought a piece of land and founded a farm, intending to use its proceeds to pay the wages he had promised the recruits. But even this failed and Waßmuß returned to Berlin a broken man in April 1931, where he died six months later.

Nothing could have been further from the mind of Waßmuß and all the other German intellectuals who engaged with Iran or visited the country 100 years ago than the foundation of a caliphate. Yet from this time onwards, Germany began to develop its presence in Persia – in a completely different way from all other European powers: subtly, sustainably, and probably for that very reason, permanently.

Iran has never regarded Germany as a colonial power: nevertheless, or perhaps precisely because of this, Germany has had more of a cultural and economic impact on Iran than any other foreign country. In order to understand why Germany enjoyed greater success in Iran than all its European rivals, it is necessary to remember the state Iran was in a hundred years ago.

The First World War had plunged Iran into a catastrophe. The central state had failed, millions of people starved to death. The country was plagued by unrest. Moreover, Great Britain had occupied the south and was attempting to seize the oil wells there. Iran was disappearing from the map. The British imperial power and Tsarist Russia were the main perpetrators of this catastrophe, or at least that was how the Iranian elite saw it. Anti-British and anti-Russian sentiment prevailed throughout the country. And that was the invaluable capital on which the Germans built their policy in Iran.

The anti-Israeli Quds Day did not take place this year – a first both for Iran and Lebanon's Hezbollah. While Hezbollah leader Nasrallah sees his organisation in a state of siege ... END_OF_DOCUMENT_TOKEN_TO_BE_REPLACED

In "Sprache und Sein" (Language and Being) the activist Kubra Gumusay critically examines the function of language – the narratives that reflect and determine the realities of ... END_OF_DOCUMENT_TOKEN_TO_BE_REPLACED

Award-winning Indian author Rahman Abbas spent time in Europe last year researching "the Holocaust and the future of minorities in India and Pakistan". To mark VE Day on 8 May, he ... END_OF_DOCUMENT_TOKEN_TO_BE_REPLACED

A muezzin call to prayer via loudspeaker is legally permissible in principle, but various basic rights and interests must be considered, explains professor of law Mathias Rohe in ... END_OF_DOCUMENT_TOKEN_TO_BE_REPLACED

Repression and despotism takes many forms. Yet as varied as these phenomena are, they all share a common core, argues Tarek Azizeh. Revolutions accompanying the struggle for ... END_OF_DOCUMENT_TOKEN_TO_BE_REPLACED

END_OF_DOCUMENT_TOKEN_TO_BE_REPLACED
Social media
and networks
Subscribe to our
newsletter