Wilhelm Waßmuß had been playing a cat-and-mouse game with the British occupying forces in southern Iran for two years when a group of exiled Iranians arrived at the Foreign Office in Berlin. Friedrich Rosen, the best known Orientalist of the time and an expert on Iranian literature, had selected and brought these Iranians together. They were to publish a sophisticated literary anti-British militant magazine. Rosen, Emperor Wilhelm II's foremost diplomat, is said to have suggested the name "Kaveh". Kaveh is a figure from Iranian mythology, a blacksmith who fights and triumphs over tyranny.

"Kaveh" became a highly influential publication that would change Iranian history forever. For six years, from 1916 to 1922, the German Foreign Ministry financed, organised and distributed this unique militant journal. It was to be the best political and literary journal ever published in Persian.

The editorial members were the best known and most capable intellectuals Iran could muster at the time. The editor-in-chief was Hassan Taqizadeh, one of the most dazzling figures in recent Iranian history. He later became a member of parliament, minister, diplomat and ambassador, but also a renowned scientist, publicist and university professor. And Taqizadeh gathered men around him in his Berlin editorial office, all of whom would go on to have a lasting influence on Iranian politics and the intellectual world: for example Mohammad Ali Djamalzadeh, the father of the modern Iranian novel, or Mohammad Ghazvini, founder of modern literary research at the subsequently founded Tehran University. 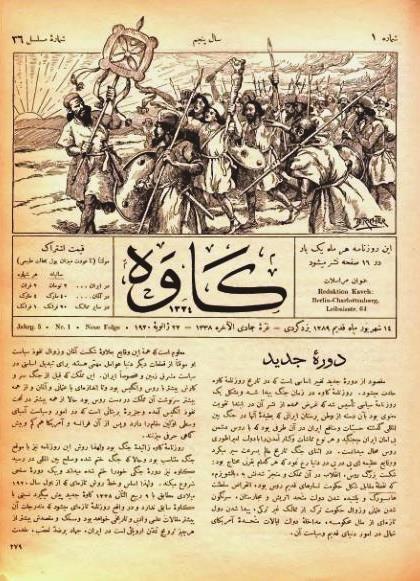 A publication that would change the face of Iranian history: for six years, from 1916 to 1922, the German Foreign Ministry financed, organised and disseminated the "Kaveh" militant newspaper. It was to be the best political and literary journal ever published in Persian. The editorial team comprised Iranʹs most prominent, most capable intellectuals of the time

The triumphant march of Reza Khan

"Kaveh" reflected a patriotic mood that was soon to have a lasting impact. As the fifth annual edition of the magazine was being celebrated in Berlin, an officer of the Iranian Caucasian brigade marched into Tehran with his troops and challenged the declining monarchy. His name was Reza Khan; after his invasion he first became defence minister, then prime minister and three years later the new King of Iran, Reza Shah Pahlavi. The Berlin editors around Taqizadeh had achieved their political goal. Almost all members of the editorial staff returned to Iran at that time.

The magazineʹs former editor-in-chief became Reza Khan's most important advisor. The other members of the editorial staff also supported the new ruler, whose role model Kemal Ataturk was in the process of transforming neighbouring Turkey from the ground up.

Reza Shah also vigorously pushed ahead with the modernisation of Iran. He restricted the power of the clergy and tried to remain neutral in foreign policy. Historians agree that Reza Shah's reforms completed the nation-building project in modern Iran. He is said to have been something of a Germanophile, but it is doubtful whether he even knew the term. Reza Shah was illiterate and only learned to read and write in adulthood.

There is no doubt, however, that during his reign, Germans played a leading role in all the projects with which Reza Shah wanted to transform the country. When it came to founding the university, rebuilding the administration, building roads and providing health care: Reza Shah preferred to rely on Germans.

The heyday of the Germans in Iran

The Trans-Iranian railway project, which was built between 1927 and 1938 and connected Tehran with the Persian Gulf in the south and the Caspian Sea in the north, is legendary. For the construction of this long railway line, German companies founded a consortium in which almost the entire German industry was represented: from Julius Berger, Philipp Holzmann and Siemens to – of course – German banks.

Reza Shah was a patriot. Like Ataturk in Turkey, he wanted to turn Iran into a republic, but the Ayatollahs were vehemently against it. They feared for their power and believed that a republic would inevitably lead to secularism. "The king is the shadow of God" was a dearly held religious tenet.

Yet even as king, Reza Shah forged ahead with his project of secularism, banning women from wearing veils, introducing military service for all Iranians including the mullahs, not to mention secular jurisdiction. In a strange twist of fate, "republic" was Ayatollah Ruhollah Khomeini's main slogan during the revolution that put an end to the monarchy in Iran in 1979.

In terms of foreign policy, Reza Shah tried to manoeuvre between the major powers. It was this neutrality, however, that would prove his downfall. He also wanted to remain neutral during the Second World War. In vain. In March 1941, British and Soviet troops marched into Iran, divided the country once again among themselves and issued an ultimatum to the Shah on 17 September 1941 to leave the country by 12 noon. This he did, embarking on his last journey into exile in South Africa.

The anti-Israeli Quds Day did not take place this year – a first both for Iran and Lebanon's Hezbollah. While Hezbollah leader Nasrallah sees his organisation in a state of siege ... END_OF_DOCUMENT_TOKEN_TO_BE_REPLACED

In "Sprache und Sein" (Language and Being) the activist Kubra Gumusay critically examines the function of language – the narratives that reflect and determine the realities of ... END_OF_DOCUMENT_TOKEN_TO_BE_REPLACED

Award-winning Indian author Rahman Abbas spent time in Europe last year researching "the Holocaust and the future of minorities in India and Pakistan". To mark VE Day on 8 May, he ... END_OF_DOCUMENT_TOKEN_TO_BE_REPLACED

A muezzin call to prayer via loudspeaker is legally permissible in principle, but various basic rights and interests must be considered, explains professor of law Mathias Rohe in ... END_OF_DOCUMENT_TOKEN_TO_BE_REPLACED

Repression and despotism takes many forms. Yet as varied as these phenomena are, they all share a common core, argues Tarek Azizeh. Revolutions accompanying the struggle for ... END_OF_DOCUMENT_TOKEN_TO_BE_REPLACED

END_OF_DOCUMENT_TOKEN_TO_BE_REPLACED
Social media
and networks
Subscribe to our
newsletter