Solidarity and Responsibility for the Past

Sixty-one years of Israel, 60 years of the Federal Republic of Germany – two countries bound by fate. Today their relations are characterised by friendship and trust. But the path has been a long one. Bettina Marx reports 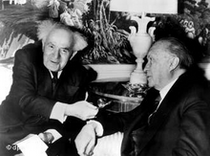 ​​ German chancellor Angela Merkel is a well-received guest in Israel. She is regarded as a loyal and committed friend of the Jewish state, who, even when Israel lands in the crossfire of international criticism, never lets doubts arise about Germany's commitment to the Jewish people and the state of Israel.

She recently made this clear on 18 January when she, together with five other European heads of state and government, travelled to Israel for a demonstrative visit of solidarity.

On this day the ceasefire ending the three-week Israeli offensive in the Gaza Strip, which had killed more than 1,300 people on the Palestinian side, came into effect.

European politicians travelled from Egypt, where they had pledged their support for finding a peace solution. First of all, declared Merkel in Egypt and in Israel, the smuggling of weapons into the Gaza Strip must be stopped. Germany, she continued, was willing to help.

The German chancellor's message was that Germany stands firmly on the side of Israel, thereby renewing the pledge of support to Israel that she had given a year ago when she, the first foreign head of government to do so, held a speech in Knesset, Israel's parliament.

The occasion was the 60th anniversary of the founding of the Israeli state, which was commemorated throughout Germany with numerous official events.

As the first ambassador from the Federal Republic of Germany, Rolf Paul hands Israeli President Zalman Shazar his credentials

​​ "Germany will never abandon Israel, and will always be a faithful partner and friend," declared Merkel. Relations between our two countries are special and unique. They are based on common values, on solidarity, and on Germany's everlasting responsibility for the past.

Merkel did not arrive in Israel alone. She came with a whole entourage of ministers, as the 60th anniversary of the Jewish state was slated to begin with the first German-Israeli government consultation to be held in Jerusalem.

The event marked the apex of rapprochement to date between the two states, which were founded one year apart, Israel in 1848, and the Federal Republic of Germany one year later.

Initial contacts between Bonn and Jerusalem were made in the 1950s. In 1952 Israel and the Federal Republic of Germany signed the Reparations Agreement, in which the German government recognised its responsibility for the murder of European Jews by the Nazi regime and agreed to try to compensate the Jewish people, at least financially.

In the agreement Bonn agreed to pay Israel reparations of three billion German marks – around 1.5 billion euros – through 1965. Another 450 million went to the Claims Conference, which would pursue the individual interests of persecuted Jews and negotiate on their behalf. 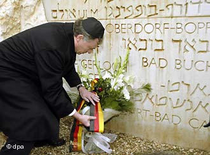 "Whoever would have thought 40 years ago how good, how friendly our relationship would turn out to be?" – German President Horst Köhler at the Yad Vashem memorial

​​ For German chancellor Konrad Adenauer the reparation payments to Israel on behalf of Jewish victims of German National Socialist terror was an indispensable pillar of German post-war politics.

"We had to make amends for the injustice done to Jews by the National Socialists as far as was humanly possible," he said later in hindsight.

The most important task for post-war Germany, according to Adenauer, was reconciliation with Jews and the establishment of relations with the state of Israel. In March 1960 he met together with Israeli Prime Minister David Ben Gurion for the first time in New York.

The meeting took place in the Waldorf Astoria hotel in New York, and it marked the beginning of German-Israeli relations, paving the way for the establishment of official diplomatic relations between the two countries in 1965.

In the following years and decades contact between Germany and Israel was expanded to every level. There has been close cooperation in the areas of art, science, and research, as well as a youth exchange.

Also in the political sphere the two countries have grown closer. After the United States Germany became Israel's most important partner, and within the EU the Jewish state's most reliable advocate.

But normalcy in relations, says German President Horst Köhler, cannot exist because of German responsibility. Forty years after the establishment of diplomatic relations, Köhler spoke in Knesset. "Whoever would have thought 40 years ago how good, how friendly our relationship would become," he asked.

Today not only do the governments work well together, the relationship between Germany and Israel is also characterised by friendly relations between the people of both countries. Recently, however, increasingly critical tones are entering into this friendship.

Especially the offensive against the Gaza Strip – if not in the government – has unleashed indignation and protests among Germans.

German-Israeli Relations
Merkel Could Have Taken It Further
On her visit to Israel, German Chancellor Angela Merkel could have addressed more "difficult" issues, says Peter Philipp. What the Middle East needs most, he says, is encouragement to pursue peace

Israel and US Foreign Policy
"Protecting Israel against Its Own Strength"
The Israeli sociologist Lev Grinberg is of the opinion that Israel's politicians always have one eye on American foreign policy. This is why preparations for the war against Gaza began the day Barack Obama was elected US president

Israel Turns 60
A History of a Conflict
May 14 marks the 60th anniversary of the founding of the state of Israel. While Arabs call the day "the catastrophe," many Israelis aren't in the mood to celebrate. A look back on six decades of dreams and nightmares. Peter Philipp reports

END_OF_DOCUMENT_TOKEN_TO_BE_REPLACED
Social media
and networks
Subscribe to our
newsletter