65 years ago, one of the biggest tank battles in the Second World War took place between Rommel's Africa corps and Allied troops near El Alamein. The mines that were left behind still claim victims among the civilian population. By Frederik Richter

65 years ago, one of the biggest tank battles in the Second World War took place between Rommel's Africa corps and Allied troops near El Alamein on Egypt's northwest coast. The mines that were left behind still claim victims among the civilian population. Frederik Richter describes the background 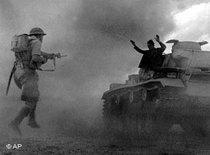 The battle of El Alamein, fought in the deserts of North Africa, lasted from October 23 to November 5, 1942

​​Every fall, veterans from all over the world gather in El Alamein in Egypt to commemorate their fallen comrades. But hardly any of them spares a thought for the victims that the battle is still claiming today.

The troops left behind in the desert some 21 million aircraft bombs, tank shells and landmines. There's no telling where the shifting sands may have carried these mines by now.

The Foreign Ministry in Berlin asserts that international law does not require Germany to clear away mines deposited in Egypt during World War II. But Germany has nonetheless repeatedly offered Egypt humanitarian assistance, by for example handing over old maps showing where the mines are located, or supplying metal detectors.

An area of 2,800 square kilometers is still contaminated, a thirty-kilometer wide swath between El Alamein, some 60 kilometers west of Alexandria, and the Libyan border. This is a region inhabited primarily by Bedouins, the ones who most frequently fall prey to the leftover ammunition today.

It was not until 1982 that the Egyptian government acknowledged the problem. "It was a question of costs and priorities," Fathy El Shazly, director of the national northwest coast development program, frankly admits.

He refers to the history of his country, which after the Second World War was first busy gaining independence and then tied up in four wars against Israel. A bit more haste would have been advisable, though.

According to the NGO "Landmine Monitor," there have been 8,313 mine-related casualties in this region since 1982, including 619 deaths. As can be observed again and again whenever natural disasters or accidents occur, however, the Egyptian government evidently does not place much importance on its own citizens. It has done little to help the victims to date.

The Egyptian army did clear some 3.5 million pieces of ammunition out of the desert between 1982 and 1999, but since then a lack of funds has slowed down their efforts – at least that's the official line.

Since things are moving much too slowly for the private sector, which has great plans for the region, some hotels and oil companies have begun to remove buried ammunition at their own expense in order to build access roads to their projects.

In the year 2000, a National Commission was founded to address the issue. It included representatives from so many ministries and authorities, however, that it has since had to be reformed several times and has not really been able to take action.

In November 2006, the UNDP concluded an agreement with the Egyptian government on the development of the northwest coast. The first phase of a new strategy should be drafted by summer 2007.

The mines will then be recovered over several years in a second phase. For the first time, the agenda includes informing the public and protecting potential victims.

But the main question is still: Who is going to pay? The program is already short 1.1 million dollars for the first phase. According to El Shazly, the army estimates that the cost of clearing the mines will come to around 250 million dollars.

That is only a fraction of the sum that will subsequently have to be invested in infrastructure and commercial development. "The real challenge," El Shazly points out, "is to develop the region."

Egypt is relying completely on its international donors to foot the bill. But at least El Shazly – by contrast with many other voices in Egypt – is no longer insisting that Germany and the other participants in the battle take responsibility. "The issue of international responsibility does not play a role for me anymore. I will speak with anyone who is interested in seeing Egypt thrive."

His argument is that the mines are preventing the development of a key part of the country. The Ministry for International Cooperation estimates that some 22 percent of Egypt's terrain has been rendered unusable due to ammunition still buried underground. This area also harbors around 4.8 billion barrels of crude oil and 3.8 billion cubic meters of natural gas, El Shazly maintains.

Furthermore, 1.85 million hectares of arable land, which is becoming increasingly scarce in Egypt, could be opened up for farming. Most importantly, however, the northwest coast is at the center of Egypt's tourist strategy, with coastal strips along the Red Sea and the Sinai long since displaying the kind of patchwork development that results from the lack of a coherent plan.

Some of the Mediterranean's most beautiful beaches can be found on Egypt's northwest coast, and many of them are as yet untouched. Emirates-based real estate giant Emaar purchased land near Sidi Abdel-Rahman last year for 1.74 billion dollars with plans to develop an entire city for tourists.

In this region, where between 70,000 and 100,000 people live today, 380,000 new jobs could be created. According to the national northwest coast development plan, the coast could be home to 1.5 million Egyptians by 2022. The government is supporting these endeavors because it would like to see people relocate from the narrow Nile Valley out to peripheral areas.

Private sector must get involved

When it comes to removing mines, international donors have so far shown little inclination to come to Egypt's aid, and the new arguments will probably not do much to change this. The Egyptian government has simply done too little itself up until now.

At the beginning of May, El Shazly did invite international manufacturers of mine removal equipment to Cairo to conduct tests there. One of those who came was Erik Tollefsen from the Geneva International Center for Humanitarian Demining (GICHD).

He was impressed by the motivation and professionalism of the Egyptian government, and he thinks it's a good idea to enlist the army in mine removal for the time being. "It is important to have a strong national partner, and the Egyptian army has an excellent standing in society and the administration," Tollefsen commented.

He nevertheless believes that the Egyptian government must in future open up its program to private-sector organizations and companies. After all, it is unusual that a country's national army implements a demining program entirely on its own. Moreover, the involvement of private businesses or NGOs offers international donors greater transparency.

On the other hand, however, Egypt is not exactly setting a good example with its mine removal efforts. It refused to sign the Ottawa Anti-Mine Convention in 1997.

The reason behind this can be found in the Egyptian army's security concerns. Little about this issue is allowed to become public, but the fact is that the vested interests of the military are still inviolable in this country. The army will hardly be willing to forfeit its authority here when the prospects for acquiring expensive equipment are so enticing.

END_OF_DOCUMENT_TOKEN_TO_BE_REPLACED
Social media
and networks
Subscribe to our
newsletter