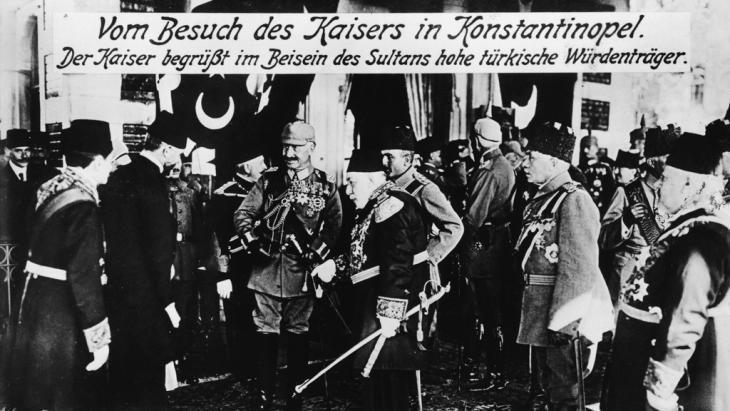 When the First World War began 100 years ago, German advisers in the Ottoman Empire were a common sight. The Ottomans hoped their alliance with the military power Germany would help them reverse their waning military fortunes. In the end, however, they lost their entire empire as a result of the conflict. By Jakob Krais

The Russians were surprised. On the morning of 29 October 1914, the Crimea awoke to the sound of gunfire. Ships sank, oil tanks went up in flames. The Ottoman Empire was attacking the Russian Black Sea fleet.

The Tsarist Empire was at war, not with the Ottomans in the South, but with the Germans in the West. Perhaps, on this particular morning, the Russians would have been less surprised if they had known that the language being spoken on board the Ottoman warships was German, and that the commander's name was Wilhelm Souchon, an Admiral of the Imperial German Navy.

Relations between Germany and the Ottoman Empire reached their zenith during the First World War. Sultans had already begun hiring German officers in the nineteenth century to modernise their army, which had been weakened by a series of defeats. The Prussian-German army was at the time regarded as the best in the world, and not just in Istanbul. In turn, Emperor Wilhelm II enthused about the "friendly reception" he received from Sultan Abdul Hamid II on a trip to the Orient and presented himself as a "loyal friend" of the Muslims.

It goes without saying that behind this rhetoric of friendship stood substantial interests. The German arms industry gained lucrative contracts through the reform of the Ottoman military.

Also 100 years ago, German engineers were highly sought after in the Middle East. The Frankfurt construction company Holzmann was responsible for two spectacular large-scale projects: the Baghdad railway made it possible to travel from Berlin to the Tigris in what was at the time the barely imaginable time of less than two weeks, while the Hijaz railway was intended to bring hordes of pilgrim to Mecca – a task later assumed by the company Fraport, also based in Frankfurt. Until June 2014, Fraport managed the airport in the Saudi city of Jeddah.

The "sick man of Europe" 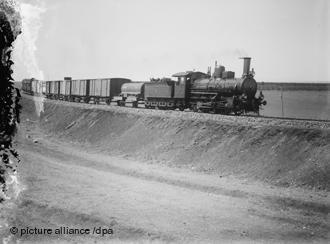 Strategic partnership: the route of the Baghdad Railway passed through Mosul, where large deposits of oil were discovered at the turn of the century. In 1912, the Ottoman Empire signed over to the German Empire concessions for all oil and mineral deposits 20 kilometres either side of the railway line as far as Mosul as compensation for the costs of constructing the railway

But intercultural communication remained difficult: many Prussian officers with their Wilhelmine ideas about discipline and order looked down on the "oriental mentality". Even after decades of co-operation, they sometimes lacked respect for their partners. For example, as Chief of Staff Helmuth von Moltke tersely ascertained: "Militarily speaking, Turkey is worth nothing!" It is therefore hardly surprising that the influx of qualified skilled personnel from Germany was not universally welcomed by all Ottomans.

There was also a down side to the economic co-operation. Because the German financial world initially showed little enthusiasm for railway projects through the Anatolian mountains or the Arab deserts, the government in Istanbul had to make them more attractive by offering conditions it could scarcely afford. Soon, outstanding payments to Deutsche Bank alone accounted for a fifth of the Ottoman Empire's entire public debt. Even though the new railway lines were not completed by the time the war began, the debt crisis remained.

The Sultan had long been regarded across the continent as the "sick man of Europe". All the major powers were working hard to cure this "sick man" – focused all the while on their own interests. For the politicians in Istanbul, the priority now was to halt to downward trend and modernise their nation with European assistance but without being completely taken over by one power or another.

The nationalist Young Turks appeared on the scene with the declared goal of finally leading the empire back to its old strength. Before long, they had shunted the Sultan and Grand Vizier onto the sidelines.

100 years ago, power on the Bosporus was wielded by a triumvirate of Young Turks consisting of War Minister Enver Pasha, Navy Minister Djemal Pasha and Interior Minister Talaat Pasha. All three wanted to utilise the looming large-scale war to win back lost terrain. The only question was which horse to back. In the end, the pro-German stance led by Enver Pasha won through: Berlin and Istanbul sealed an alliance on 2 August 1914, a day after Germany's declaration of war on Russia.

Jihad and genocide on Germany's watch

The real test came just over a week later: two German warships, the Goeben and the Breslau, survived an attack by a British squadron in the Bosporus. Although officially still neutral at the time, the Ottomans picked up the ships and integrated them into their own Navy. Henceforth the ships went by the names Yavuz Sultan Selim and Midilli, the sailors exchanged their caps for the fez and no longer had Sundays off, but Fridays. The commander was Admiral Souchon – none other than the man who ordered the Ottoman advance on the Crimea.

Many within the Istanbul government would rather have continued manoeuvring between the various alliances. But War Minister Enver simply gave the German Admiral the go-ahead to launch the surprise attack on Russia, as a way of getting the ball rolling and finally and officially entering the war on the German side. 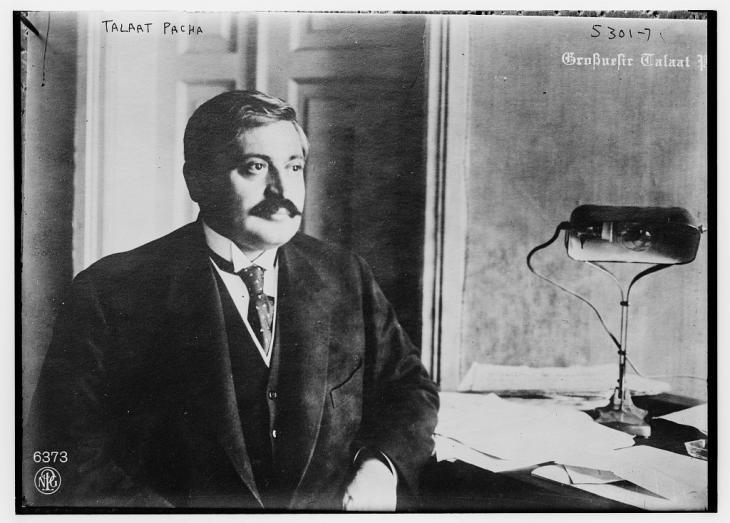 Talaat Bey, also known as Talaat Pasha, was Interior Minister and Grand Vizier of the Ottoman Empire and the leader of the Young Turks. It was he who ordered the deportation of Armenians that marked the beginning of the Armenian Genocide, which the German Empire knew about but did nothing to stop. After the war, he was assassinated by an Armenian while living in exile in Berlin

At the same time in Germany, enthusiasm for the jihad was already building: "There rises up before England's sunken eyes the spectre of the exaltation of all Islam", rejoiced the Leipziger Neuesten Nachrichten as Muslims all over the world were called into battle for the Ottoman Caliph, "a call from the Caliph, and it will be heard as far as Arabia, in Algiers, in Morocco, and the band of shared faith with unite them all."

In order to avoid endangering the alliance against Britain, the German imperial government turned a blind eye to one of the most heinous crimes of the First World War: the Armenian genocide. Although it was aware of what was happening early on because of the officers and diplomats stationed in the country, it decided to remain silent. The Germans wanted to avoid doing anything that would annoy partners such as Djemal Pasha and Talaat Bey – both primarily responsible for the genocide.

So the alliance held until the bitter end. German generals led operations on the Dardanelles, in Syria, in Iraq, on the border with Iran. But they were also unable to prevent the British advance in the Middle East: in 1917, British troops that had landed on the Persian Gulf captured Baghdad; further to the west, they pushed forward from Egypt into Palestine. The Arab provinces of the Ottoman Empire were lost as a result.

The Young Turks had obviously backed the wrong horse: their government had to stand down in October 1918, its successor signed the ceasefire agreement. On 2 November, a German submarine took the three pashas (Enver, Djemal and Talaat) out of the country.

In the ensuing years, the members of the Young Turkish triumvirate lived in exile in Berlin, where Talaat was murdered by an Armenian in 1921. The Berlin regional court subsequently acquitted the perpetrator. Considering Germany's close connections to the Ottoman regime,  one might almost believe that it did so to appease its conscience.

Home
Print
Newsletter
More on this topic
Fatih Akin's film about the Armenian genocide: Processing a collective traumaTurkey and Armenia: "This Is None of Europe's Business"Armenians in Turkey: A Feeling of Powerlessness
Related Topics
Armenians, History of Islam, History of the Near and Middle East, Islam and the West, Istanbul, Jihad
All Topics

We are in favour of human rights. But One Love armbands are self-righteous and ignore some fundamental issues. Stefan Buchen examines the debate surrounding the World Cup in Qatar END_OF_DOCUMENT_TOKEN_TO_BE_REPLACED

Education for girls and women is still possible in Afghanistan, says Reinhard Eroes of the Kinderhilfe Afghanistan initiative. In interview with Elisa Rheinheimer, he talks about ... END_OF_DOCUMENT_TOKEN_TO_BE_REPLACED

In Doha, Arabs from Morocco, Tunisia, Egypt and Algeria are gathering to celebrate the first ever FIFA World Cup to be held on Arab soil. The criticism from Europe? Over the top, ... END_OF_DOCUMENT_TOKEN_TO_BE_REPLACED

Canan Topcu came from Turkey to Germany as a child. In her essay, she describes how bothered she was by the racism she encountered in her country of origin when she travelled ... END_OF_DOCUMENT_TOKEN_TO_BE_REPLACED

All organisers use major sporting events like this year’s FIFA World Cup in Qatar primarily to advertise their country and promote a slick public image. This is not something we ... END_OF_DOCUMENT_TOKEN_TO_BE_REPLACED

A leading light of Israeli theatre, Ofir Henig has directed the Israel Festival and is the only female director to have been awarded the Israel Theatre Prize. These days, however ... END_OF_DOCUMENT_TOKEN_TO_BE_REPLACED
Author:
Jakob Krais
Date:
Mail:
Send via mail

END_OF_DOCUMENT_TOKEN_TO_BE_REPLACED
Social media
and networks
Subscribe to our
newsletter