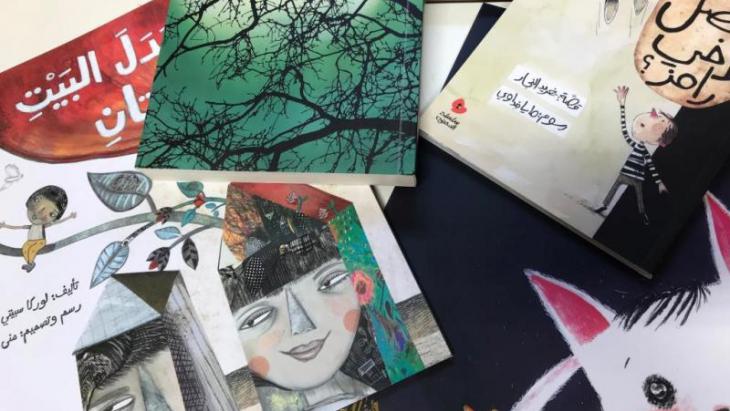 The Arabic Childrenʹs Literature Festival held recently in Munich presented a selection of recommended childrenʹs books in Arabic. The catalogue is one of the early outcomes of a three-year project run by the International Youth Library, with the aim of bringing as yet unknown Arabic childrenʹs books to Germany. By Claudia Mende

When little Karim lies in bed at night he sees strange shapes in the dark, damp stains on the ceiling. Characters that take him along on adventures in another world. But one evening, the shapes have gone – his father has painted over the stains. Karim is sad, but then he turns to pen and paper to write down the experiences of his imaginary friends.

"The Creatures on the Ceiling" (Kanat saqf al-ghurfa) by Nabiha Mheidly has sold 12,000 copies, making it one of the most popular Arabic childrenʹs books. It has been chosen as one of 40 recommended titles for young readers up to the age of ten.

Munichʹs International Youth Library recently (11/12 April) presented their selection at the Arabic Childrenʹs Literature Festival, held at the cityʹs Gasteig cultural centre. The catalogue is the first outcome of a three-year project (2017-2020) aiming to call attention to Arabic-language books for children and young adults.

The Syrian Kurdish cultural historian Azad Hamoto chose the titles, no mean feat. As well as evaluating the booksʹ literary and educational value, the initiators hope to build networks with publishing houses, writers and editors in Arabic-language book markets.

So far, Arabic childrenʹs books have been all but invisible in Germany. There are almost no translations into German and very few resources for Arab families in the countryʹs libraries. The only exceptions are a handful of bilingual childrenʹs books published by Edition Orient and Baobab Books. Teachers have no orientation to help find appropriate stories. 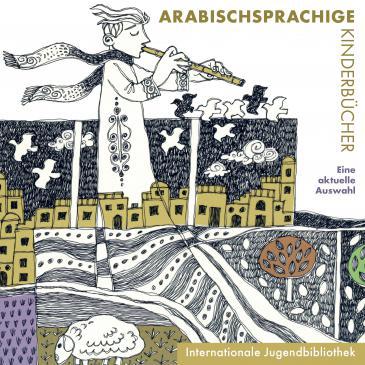 Showcasing childrenʹs literature: as well as evaluating the booksʹ literary and educational value, the initiators of the Arabic Childrenʹs Literature Festival hope to build networks with publishing houses, writers and editors in Arabic-language book markets

The International Youth Library intends to close that gap. All the selected childrenʹs books are outstanding in terms of language and content. They feature stories, fables and fairy tales from the Arabic narrative tradition, picture books and fictionalised historical stories about Ibn Battuta, Ibn Sina (Avicenna) or Sinbad the Sailor. The titles have all been published since 2015 and are beautifully illustrated.

"We want to know what stories are told to children in the Arab world," said Christiane Raabe, the director of the International Youth Library, at the launch event. "If we want to grow together, we have to take an interest." Native-language childrenʹs books can build bridges into a culture widely unknown in Germany, one frequently perceived through a stereotyped lens, she added.

The selection of books is intended to encourage libraries, kindergartens and schools to buy books in Arabic. The idea is that the books can give a little piece of home back to children who have lost everything on their way to Germany, while supporting their language development.

Arabic childrenʹs books have made huge leaps over the past years. The quality of their writing, illustrations and production has improved significantly, the Lebanese publisher and author Nabiha Mheidly said at the festival. Founded in Beirut in 1987, her Al-Hadaek publishing house was the first press in the Arabic world to publish only books for children and young adults.

Mheidly publishes writers from Egypt, Syria, Oman, Bahrain and Tunisia. "Childrenʹs books have been booming in the Arabic world since around 2012," she explains. New prizes and awards, especially in the Emirates and the Anna Lindh Foundationʹs promotion programme have caused growing interest.

New childrenʹs presses have sprung up, especially in Lebanon, the Emirates and Jordan. Young adult (YA) titles are still rarer, but here too there are now writers capturing the lives of young Arabs, with their books gaining keen readers. Mheidlyʹs examples are the Algerian Ahmed Sibyaa with his novel "Market of Happiness" (Souk as-saada) and the Ramallah-based Palestinian Mais Dagher with her book "The Clique" (al-Schilla).

Print runs are still small, compared to the population; in comparison to some other parts of the world, the region does not have a great many readers. One of the main challenges for Arab publishers is distribution. There are no book distributors or wholesalers, which makes getting books into shops complicated and expensive. "Our most important buyers are private schools," Mheidly says.

Nabiha Mheidly is convinced that children all over the world love the same stories. Nonetheless, she says, the social context in which they are written does play a role. That context has changed, in turn altering the concept of childrenʹs and YA books. 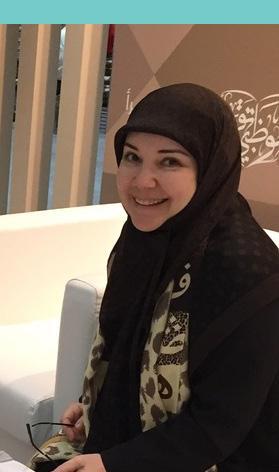 Nabiha Mheidly is convinced that children all over the world love the same stories. Nonetheless, she says, the social context in which they are written does play a role. That context has changed, in turn altering the concept of childrenʹs and YA books

Shifting away from educational books

While the focus 20 years ago was on educational books that children could learn from, publishers and readers are now interested in well-written and beautifully illustrated stories. The rose-tinted spectacles have come off too. Books are picking up on new subjects, for example "Alyaa and the Cats" (Alya wa al Qitat at-talat) by the Moroccan writer Amina Hashimi Alaoui. Her book about pregnancy and birth is a novelty for the Arab world. Neglect, teenage conflicts and family rows are no longer taboo.

For instance, in "I Have Not One House but Two Houses", the Lebanese writer Lorca Sbeity (born 1979) tells the painful story of a separation from a childʹs perspective. Parenting roles have also changed. "You wonʹt find the cliche of father reading the newspaper while mother cooks in todayʹs childrenʹs books," says Mheidly. Childrenʹs writers are reflecting changing societies.

Illustrators have developed a visual language of their own, according to the Egyptian illustrator Walid Taher. Especially in Egypt, he says, there is now a school of artists who have emancipated themselves from their Italian and French role models.

The current conflicts in the region are barely reflected in the books. One exception is the story "The Migrant Cat" (al Qitta al-muhajira) by the Syrian writer Jekar Khourchid, who lives in exile in The Hague. His bookʹs feline protagonist experiences violence, destruction and forced migration.

One peaceful winterʹs day, a hurricane drives Mira the cat out of town. On her escape, she passes through the city of the dogs and the lands of the crocodiles, elephants and hedgehogs – nowhere is she welcomed. Only once she meets the hoopoe does she find something like a home.

In books from their cultures, children from Arab families now growing up in Germany may well find a home too. Munichʹs city library has already ordered two copies of every recommended title.

The Prophet Muhammad never executed anyone for apostasy, nor encouraged his followers to do so. Nor is criminalising sacrilege based on Islam’s main sacred text, the Koran. In ... END_OF_DOCUMENT_TOKEN_TO_BE_REPLACED

Archaeologists have uncovered the remains of an ancient city in the desert outside Luxor in Egypt. They say it dates back to the golden age of the Pharaohs more than 3,000 years ... END_OF_DOCUMENT_TOKEN_TO_BE_REPLACED

Surging coronavirus cases in many parts of the world have overshadowed the start of this year's Muslim holy month of Ramadan, with festivities once again curtailed by contagion ... END_OF_DOCUMENT_TOKEN_TO_BE_REPLACED

German Middle East analyst Guido Steinberg and television journalist Ulrich Tilgner have both published new books on the conflicts in the Middle East. Their analyses and their ... END_OF_DOCUMENT_TOKEN_TO_BE_REPLACED

Televised Turkish dramas are all the rage in the Middle East. A young Ottoman TV Empire has been expanding its soft power by harnessing regional dialects, Arabic names and viewers ... END_OF_DOCUMENT_TOKEN_TO_BE_REPLACED

Nawal El-Saadawi has died in Cairo at the age of 89. The prominent doctor, activist and author became internationally known for her outcry against female genital mutilation and ... END_OF_DOCUMENT_TOKEN_TO_BE_REPLACED
Author:
Claudia Mende
Date:
Mail:
Send via mail

END_OF_DOCUMENT_TOKEN_TO_BE_REPLACED
Social media
and networks
Subscribe to our
newsletter