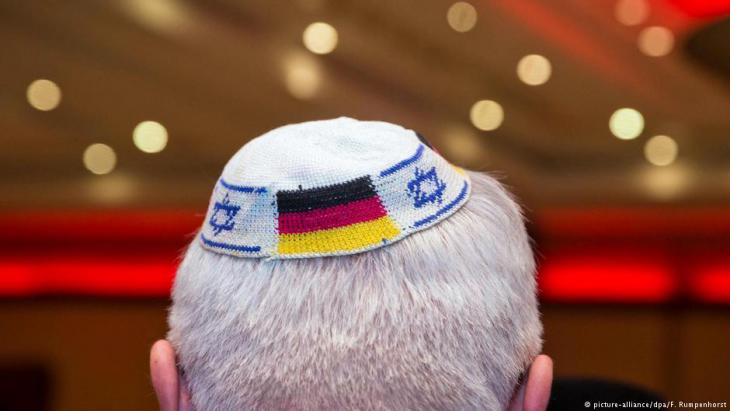 Jews – the AfDʹs means to an end

The AfD, more known for its anti-Semitism, is looking to attract Jews. In his commentary, Armin Langer writes that Jews in Germany should distance themselves from right-wing populists and instead strive to ally themselves with other threatened minorities

Jews in the right-wing populist Alternative for Germany Party (AfD)? An absurd concept – after all the party has shown repeatedly that it has an anti-Semitism problem. The AfD is the party which, according to its manifesto, wants to introduce a ban on shechita (the method of producing kosher meat under Jewish law), which would make many Jews' lives more difficult.

It is the party whose deputy parliamentary group leader in the Berlin-Marzahn district council praised "the clever policies of SS chief Heinrich Himmler's head deputy Reinhard Heydrich", the organiser of the Wannsee Conference on the "Final Solution to the Jewish Question". Then thereʹs the party's parliamentary leader in the Thuringian state parliament, Bjoern Hoecke, who described Berlin's Holocaust monument as a "memorial to shame" and called for a "180-degree reversal on the politics of remembrance." And these are just a few of the anti-Semitic scandals for which the AfD has become notorious in recent years.

And yet it is precisely this party, the AfD, which is offering itself as an election option for Jews. The reason? Because the AfD pays particular attention to anti-Semitic acts of violence committed by young people of Arab descent and advocates restricting immigration from the Islamic cultural region.

The phenomenon of right-wing populist parties acting as allies to the Jewish community is nothing new, in fact it can be observed across Europe. Marine Le Pen, head of the French Rassemblement National – known for decades as the Front National until its softer rebranding this past June – has expressed her sympathy with Benjamin Netanyahu's Likud-National Liberal Movement, a centre-right to right-wing political party in Israel. Geert Wilders of the Dutch "Party for Freedom" uses his trips to Israel for the same purpose.

According to Austrian Freedom Party (FPO) chairman Heinz-Christian Strache, his party resolutely opposes hatred of Jews. And Hungarian Prime Minister Viktor Orban has justified his anti-migration agenda by his alleged fight against anti-Semitism, among other things. A similar strategy is used by other right-wing parties such as the Swedish Democrats, Belgiumʹs Vlaams Belang (a right-wing populist Flemish nationalist political party) and Italy's Lega Nord. 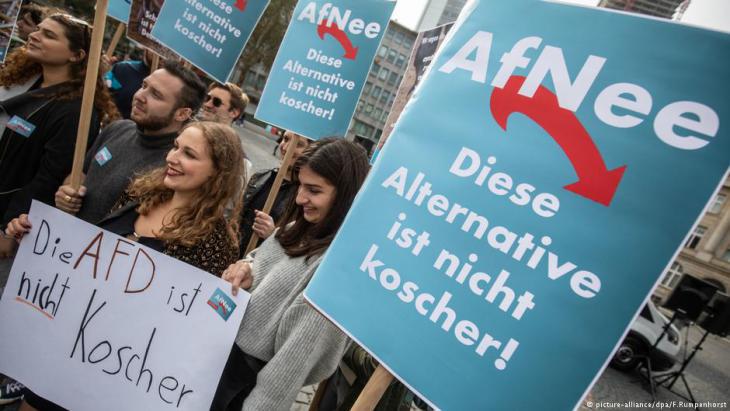 Protests against the founding of the association "Jews in the AfD": According to the former president of the Central Council of Jews in Germany, Charlotte Knobloch, the AfD represents a danger to Jewish life. The association of "Jews in the AfD" founded in Wiesbaden on Sunday serves only as a fig leaf. Jewish AfD members are being "exploited by the AfD"

But sooner or later the mask will drop: Orban has been campaigning for years against American-Jewish investor George Soros, who finances various human rights organisations, accusing him of "de-Christianising" Europe by promoting Islamisation.

This conspiracy theory relies on the cliche of the Jewish puppeteer dictating world politics from behind the scenes. Johann Gudenus, leader of the Viennese FPO parliamentary group, also believes that Soros "tried with a lot of capital power to finance all possible revolutionary tendencies." This anti-Semitic conspiracy theory is also disseminated by the portal Die Freie Welt (the free world) which belongs to the network "Zivile Koalition" (civil coalition, an online portal which claims to carry out "civil society initiatives and actions on various current issues") and which is run by the deputy AfD parliamentary group leader Beatrix von Storch.

An alliance between Jews and right-wing populists cannot work in the long term. This is because right-wing populists will only take a stand against anti-Semitism if they can use it to promote their anti-migrant agenda. It is certainly not about (supporting) Jews. The AfD is not establishing a Jewish group because the Jewish constituency is important; the number of Jews in Germany is far too small for that.

In reality, it is all about Gentiles justifying their fear of supposed Islamic land-grabbing with the Jews' fear of Muslim anti-Semitism. Jews are merely being used as a means to an end.

Seek alliance with other minorities

If the AfD were really concerned with combatting anti-Semitism, it would also have to condemn the anti-Semitism within the party and among traditional Germans. But the focus is solely on anti-Semitic crimes committed by migrants. At the same time, all the Jews' natural opponents are welcome in the party: from anti-Semitic conspiracy theorists and relativists to even Holocaust deniers.

Because initiatives that threaten minorities' religious freedom, such as the restriction of kosher and halal slaughtering demanded by the AfD, could very soon challenge Jewish and Muslim communities together.

Armin Langer studied philosophy and Jewish theology in Berlin, Jerusalem and Budapest. He is founder of the Salaam-Schalom Initiative, a community interfaith alliance in Berlin; author of the book "Ein Jude in Neukolln - Mein Weg zum Miteinander der Religionen" ("A Jew in Neukolln: My Path to Religious Coexistence"); and editor of the anthology "Fremdgemacht & Reorientiert" ("Strange Made & Reoriented").

On 15 June, the "Islamkolleg" in Osnabruck officially launched its new training programme for imams in German. The college is intended to prepare Islamic theologians for their ... END_OF_DOCUMENT_TOKEN_TO_BE_REPLACED

For centuries, the great classical Persian author Hafez has inspired German writers. Translations, adaptions and homages have been created in his wake, and the process continues ... END_OF_DOCUMENT_TOKEN_TO_BE_REPLACED

Business in the Moroccan city of Tangiers is booming due to its location at the nexus of global trade routes. But many locals are failing to reap the benefits. What they crave ... END_OF_DOCUMENT_TOKEN_TO_BE_REPLACED

Morocco and the European Union are at cross purposes when it comes to the Western Sahara. And, as Germany does not support Moroccan claims to the territory, a major conflict has ... END_OF_DOCUMENT_TOKEN_TO_BE_REPLACED

Jewish voices are much more diverse than the public often sees. Jewish men and women who oppose the injustice of Israeli occupation in the West Bank deserve our respect and ... END_OF_DOCUMENT_TOKEN_TO_BE_REPLACED

They’ve already got the Louvre; they’ll soon have a Guggenheim Museum as well – and now the Emirates have added literature to their quest for cultural supremacy in the Arab world ... END_OF_DOCUMENT_TOKEN_TO_BE_REPLACED
Author:
Armin Langer
Date:
Mail:
Send via mail

END_OF_DOCUMENT_TOKEN_TO_BE_REPLACED
Social media
and networks
Subscribe to our
newsletter