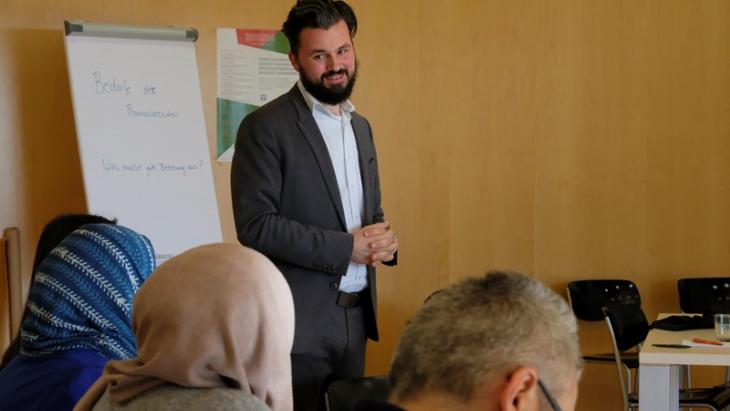 Germany′s Academy for Islam in Research and Society

Filling a void in the discourse

Germany's Academy for Islam in Research and Society took up its work one year ago. Its mission is to promote Islamic theological research and to provide a sound factual basis for the public discourse on Islam. By Canan Topcu

Members of the media who deal with topics concerning Islam and Muslims all face the same problem. In trying to sort fact from fiction, it is difficult to find specialists who are willing to answer questions – and not just on camera. Journalists are therefore often forced to rely on the same old set of supposed "experts", despite being aware that a willingness to give interviews and make statements doesn’t necessarily mean you have the requisite expertise.

The Academy for Islam in Research and Society (AIWG) intends to change all that. The institute officially began its work in Frankfurt am Main in the autumn of 2017, its first goal being to build a database of experts on Islam.

Anyone from the media looking for experts to comment on Islamic theology or on Muslim practices and everyday issues should now have an easier time finding them. The database will comprise Islamic theologians and scholars who conduct research and teach at German universities. In addition, the AIWG plans to offer media training courses to instruct this group of specialists on how to deal with journalists.

The Academy wants to contribute to "objectivising the public discourse on Islam". As unwieldy and abstract as the institute's name may sound, and as difficult as it is at first to ascertain what its acronym stands for, the AIWG is certainly one-of-a-kind in Germany.

As a university platform for research and knowledge transfer in matters both academic and social relating to Islamic theology, the Academy aims to promote Islamic theological research, foster exchange between the academic realm and civil society – and in particular to encourage more  objectivity when discussing Islamic issues.

All of this is to be accomplished through programmes and projects that are conceived based on "intensive and far-reaching discussions with Islamic theologians, scholars and representatives of Muslim civil society". "We are filling a void that has hitherto existed," explains Jan Felix Engelhardt, AIWG's managing director.

The AIWG co-ordinates and promotes research activities by scholars from the ten universities in Germany that conduct Islamic theological studies on topics related to Islam and religion. As an "interface between theology, academia and society", it also finances various formats for communication among academics, as well as between academics and members of Muslim civil society.

Germany’s electorate includes some 7.4 million citizens with international roots, while many more millions of residents from abroad aren’t allowed to vote. Both groups are often ... END_OF_DOCUMENT_TOKEN_TO_BE_REPLACED

No other Western poet was arguably so well-versed in the Koran or so fascinated by Islam as Germany's national hero, Goethe. In a new publication that examines all Goethe's ... END_OF_DOCUMENT_TOKEN_TO_BE_REPLACED

Migrants are often maligned as being responsible for Europe's problems. Yet their integration is in Europe's interest. Michael Thaidigsmann believes that a long-term vision is ... END_OF_DOCUMENT_TOKEN_TO_BE_REPLACED

How could the Afghan government and its institutions collapse so quickly? That things were going wrong in Afghanistan had been obvious for a long time, yet the West preferred to ... END_OF_DOCUMENT_TOKEN_TO_BE_REPLACED

Shida Bazyar's new novel is the literary surprise of the year. It tackles the pressing issues of our time, and yet it is timeless. This is a story of friendship, marginalisation ... END_OF_DOCUMENT_TOKEN_TO_BE_REPLACED

The swift fall of Kabul recalls the ignominious fall of Saigon in 1975. Beyond the local consequences – widespread reprisals, harsh repression of women and girls, and massive ... END_OF_DOCUMENT_TOKEN_TO_BE_REPLACED
Author:
Canan Topçu
Date:
Mail:
Send via mail

END_OF_DOCUMENT_TOKEN_TO_BE_REPLACED
Social media
and networks
Subscribe to our
newsletter