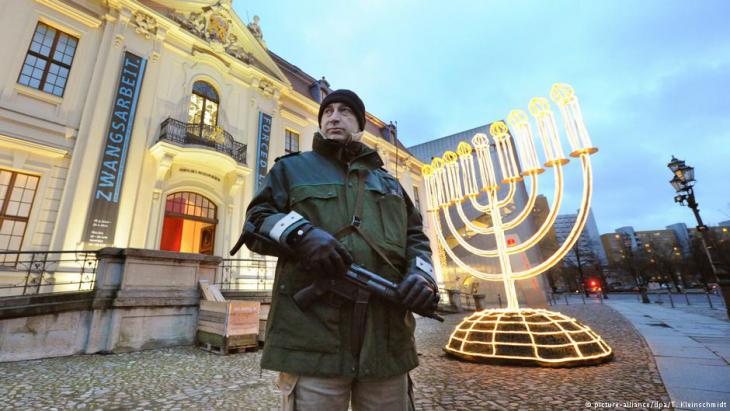 Germany appoints an anti-Semitism commissioner
Moving in the right direction

The German Bundestag has voted to appoint a commissioner charged with combatting anti-Semitism in the hopes of quelling anti-Jewish sentiment and hate crimes in the country. But what is really needed, say critics, is a commissioner to combat racism in general. Ulrike Hummel has the details

The burning of an Israeli flag during a demonstration in Berlin last December provoked indignation across all party lines. In response, the German Bundestag voted in January 2018 to appoint an anti-Semitism commissioner – a project that has been on the agenda for some time in view of the growing number of anti-Semitic incidents in the country.

A total of 16 measures are planned, including the sponsorship of dialogue projects between Jews and Muslims. The idea for the commissioner has however met with criticism. "I don't think this is the right action to take," says the Jewish intellectual and psychologist Rolf Verleger, pointing out that, according to the latest anti-Semitism report, hostility to Jews in Germany has actually been declining for several years.

"Not wanting Turks as neighbours, or Sinti and Roma, or even worse, asylum seekers as neighbours – these are the real social problems in our country." But above all, Verleger sees the measure as setting a dangerous precedent for "unequal treatment", because other minorities will feel that their own rights are being ignored.

By this in particular he means Muslims, who might very well conclude that they are not being sufficiently respected. The wiser option would be to appoint an anti-racism commissioner, says Verleger. Said Hassan, a German of Lebanese descent living in Cologne, agrees: "We Muslims have been quite heavily affected lately by hostility. When the state now takes on only the problem of anti-Semitism, one can't help but feel neglected as a Muslim."

Mosque attacks on the rise

While Germans tend not to have a problem with Italians, Jews or coloureds as neighbours, the social distance towards Eastern Europeans, Muslims and asylum-seekers, as well as Sinti and Roma has been growing, according to the latest anti-Semitism report, published in 2017. The number of attacks on Muslims in Germany rose substantially in the second quarter of last year, reported the federal government in its response to a brief parliamentary enquiry from the Linke, Germany′s left-wing party. And a recent press release issued by the Central Council of Muslims in Germany (ZMD) addressing shots fired at a mosque in Halle states that there are "assaults on mosques almost every week" in Germany.

The chairman of the Central Council of Muslims, Aiman Mazyek, notes that the council in general welcomes the appointment of an anti-Semitism commissioner. "All ideologies that are racist or display contempt for fellow human beings must be combatted." The issue is therefore not to claim that fighting one form of racism is more important than another. The fact is instead that openly expressed Islamophobia, particularly in the social media, is much more prevalent than the usually latent, but nonetheless shockingly high, level of animosity toward Jews. 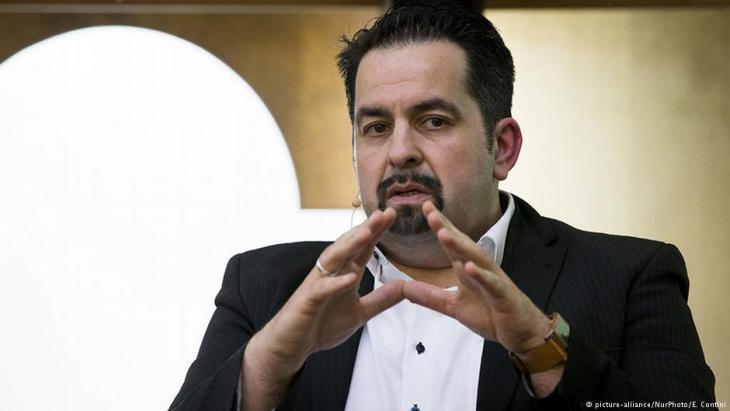 Aiman Mazyek: "All ideologies that are racist or display contempt for fellow human beings must be combatted." The issue is therefore not to claim that fighting one form of racism is more important than another. The fact is instead that openly expressed Islamophobia, particularly in the social media, is much more prevalent than the usually latent, but nonetheless shockingly high, level of animosity toward Jews

In particular due to the need to investigate the National Socialist Underground (NSU), the Central Council of the Muslims has already called in the past for the appointment of an anti-racism commissioner. And the council still sees a real need for such a post today. However, this position should not replace an anti-Semitism commissioner, but rather constitute an additional measure. "Against the background of our history in Germany and the burden we bear, I find it appropriate to install an anti-Semitism delegate," says Mazyek.

An anti-racism commissioner would be wiser

What Germany needs now is to raise awareness in society that any form of contempt for others is wrong. The 45-year-old Said Hassan, who is active in party politics, warns: "if in these times of persistent Islamophobia we choose to focus instead on anti-Semitism, this could very well backfire." Citizens of the Muslim faith may then feel discriminated against and develop resentment against the Jews.

The majority of the anti-Semitic crimes in Germany are still perpetrated by far-right extremists. But it is also true that prejudice against Jews is more widespread among Muslims than the rest of the population. This can be attributed to the Middle East conflict. "A federal commissioner charged with combatting every form of racism would contribute more to social peace," in Hassan's opinion.

The far right: hatred of both Jews and Muslims

Is it even possible to compare anti-Semitism with Islamophobia? Certainly, there are differences, says Rolf Verleger. But the professor of psychology does not find a comparison so unreasonable: "studies that survey both anti-Semitism and Islamophobia reveal that the two forms of prejudice always occur together."

The Kempf study on anti-Semitism and hostility to Israel, for example, showed that human rights-oriented groups display scarcely any animosity towards Jews and Muslims, while in right-wing groups antipathy toward members of both faiths is equally strong. 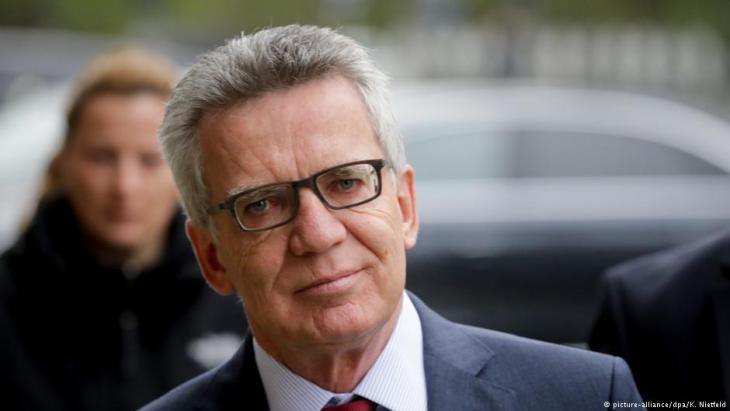 Last December German Interior Minister Thomas de Maiziere called for the creation of an anti-Semitism commissioner in response to the anti-Israel demonstrations staged in Berlin. "Not only owing to recent events, do I believe that it makes sense to appoint an anti-Semitism commissioner," said the CDU politician. It was also a measure recommended by an independent panel of experts engaged by the Interior Ministry. "Each crime motivated by anti-Semitism is one too many and shameful for our country. hatred towards Jews must never be allowed to take hold again in Germany," said Thomas de Maiziere

"That is to say, both forms of resentment always occur together," concludes Verleger. The chairman of the Central Council of Muslims sees things in a more nuanced way: "I would be rather reluctant to make comparisons, because our country's history has been marked by anti-Semitism in a particularly egregious way and we therefore bear an exceptional degree of responsibility." Contempt, hatred and certain ideologies are however attitudes that are associated both with anti-Semitism as well as Islamophobia, says Aiman Mazyek.

To compare is not to equate

Benz concluded, among other things, that anti-Muslim sentiment is being generated "using stereotypes and constructs that are commonly deployed as instruments of anti-Semitism". A group of authors including Henryk M. Broder sharply censured the scholar for his statement. According to these critics, comparing anti-Semitism and Islamophobia means to overlook that, in contrast to Islamophobia, the hostility toward Jews once led in Auschwitz to crimes on a scale unknown in human history. They maintain that anti-Semitism is thus by its very nature a much more destructive attitude than for example simple prejudice against Muslims. Critics of the author group in turn argue that comparing anti-Semitism and Islamophobia does not mean equating them and by no means trivialises the Holocaust.

Iranian artist Parastou Forouhar has lived in Germany since 1991. Full of rage, just like the protesters, she hasn't yet given up on the idea of justice. By Julia Hitz END_OF_DOCUMENT_TOKEN_TO_BE_REPLACED

Unflattering terms were used at a German Football Association human rights congress aimed at "intensifying the discussion" ahead of the World Cup. One speaker in particular made ... END_OF_DOCUMENT_TOKEN_TO_BE_REPLACED

Fariduddin Attar’s "The Conference of the Birds", one of the seminal works of Islamic mysticism, has recently been published in sumptuously illustrated German translation. It ... END_OF_DOCUMENT_TOKEN_TO_BE_REPLACED

Egyptian authorities have Mada Masr in their sights once again after critical reporting. But the editor of the country's last independent news source is adamant they will continue ... END_OF_DOCUMENT_TOKEN_TO_BE_REPLACED

Like Christianity, Europe's history is one of migration. Both have strong roots in the Orient and in cultures thousands of years old. Cultural historian Bernhard Braun invites us ... END_OF_DOCUMENT_TOKEN_TO_BE_REPLACED
Author:
Ulrike Hummel
Date:
Mail:
Send via mail

END_OF_DOCUMENT_TOKEN_TO_BE_REPLACED
Social media
and networks
Subscribe to our
newsletter