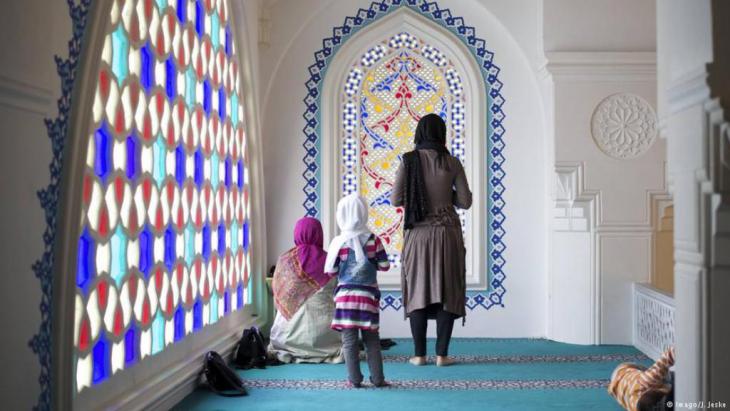 Headscarf debate: How Islamophobic is feminism?

Feminists who want to ban headscarves for girls are betraying the cause – and playing into the hands of the right-wing populists. An essay by Meredith Haaf

A gut instinct is not always the worst argument in decisional conflicts, but politically it is totally useless. In any case at the very latest if one's own gut instincts contradict the practice, needs and instincts of a great many other people. This has also been the Chancellor's experience in recent weeks.

Just as on the issue of marriage for all: within the context of questions of gender hierarchy, the domination of gut instincts remains relatively stable. The Muslim headscarf is currently back at the top of the list of sensitive issues, one that includes gender theory and prostitution and which regularly triggers stomach ulcer-like reactions.

With outcomes that are often hard on those affected: In a decision clearly driven by straightforward gut instinct, the Federal Constitutional Court recently rejected a last-minute appeal by a female Muslim lawyer who wanted to wear her headscarf while absolving her internship.

So here we have a woman being legally prevented from realising her life opportunities in the attire of her choice – in particular a woman whose background and religious conviction evidently make her the target of discrimination in pretty much any professional sector in this country. Nevertheless, this decision will be welcomed by many German feminists, just as the women's rights organisation Terre des Femmes did on Twitter. 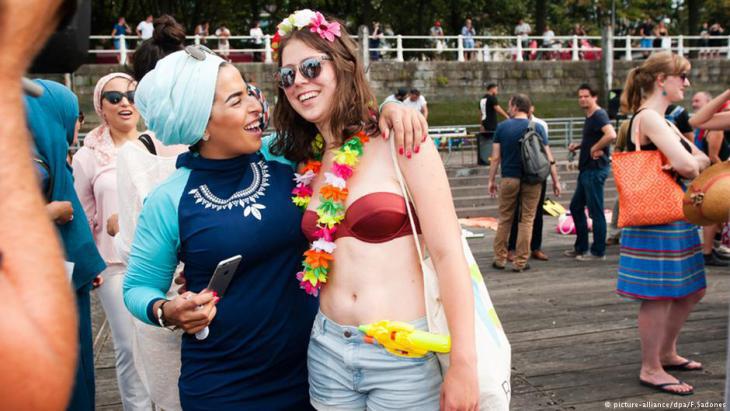 Topping the controversial league table: ahead of modern gender theories and prostitution, the Muslim headscarf has once again made it to number one as the issue most likely provoke an extreme reaction. Meanwhile, women in Antwerp can be seen here protesting together in burkini and bikini for the right to wear what they want without the state getting involved

This initially appears astonishing. But in the current setting of issues and priorities by groups such as Terre des Femmes or the magazine Emma, it is clear that the view of Islam as the motor of societal ills is not only to be found in right wing conservative circles, asserters of a national identity or the AfD.

In influential feminist circles, a perspective is prevailing from which Islam is being interpreted as the alleged all-powerful main pillar of patriarchal circumstances in this nation. The corresponding argumentation is in the best case anti-liberal and in some ways close to right wing populism. It forces the question of how close the links between feminism and progressive politics are (still) at all.

Home
Print
Newsletter
More on this topic
Women′s rights in Islam: Can feminism be Islamic?Islam and feminism: Go forth and create role models! Qantara dossier: The headscarf controversy
Related Topics
AfD | Alternative for Germany, Criticism of Islam, Feminism in Islam, Freedom of religion, Human rights, Integration in Germany, Islam in Europe, Islam in Germany, Islamophobia, The Headscarf Controversy
All Topics

One in four people in Germany has a migration background, but less than 8% of the members of parliament have foreign roots. Germany is out of touch with reality, says Maissun ... END_OF_DOCUMENT_TOKEN_TO_BE_REPLACED

Germany’s electorate includes some 7.4 million citizens with international roots, while many more millions of residents from abroad aren’t allowed to vote. Both groups are often ... END_OF_DOCUMENT_TOKEN_TO_BE_REPLACED

Germany's foreign policy is explicitly values-based. But what happens, Ralf Bosen asks, when democracy, the rule of law and human rights collide with the logic of trade and ... END_OF_DOCUMENT_TOKEN_TO_BE_REPLACED

No other Western poet was arguably so well-versed in the Koran or so fascinated by Islam as Germany's national hero, Goethe. In a new publication that examines all Goethe's ... END_OF_DOCUMENT_TOKEN_TO_BE_REPLACED

Migrants are often maligned as being responsible for Europe's problems. Yet their integration is in Europe's interest. Michael Thaidigsmann believes that a long-term vision is ... END_OF_DOCUMENT_TOKEN_TO_BE_REPLACED

How could the Afghan government and its institutions collapse so quickly? That things were going wrong in Afghanistan had been obvious for a long time, yet the West preferred to ... END_OF_DOCUMENT_TOKEN_TO_BE_REPLACED
Author:
Meredith Haaf
Date:
Mail:
Send via mail

END_OF_DOCUMENT_TOKEN_TO_BE_REPLACED
Social media
and networks
Subscribe to our
newsletter