Muslim missionaries found in Western cities are often part of the messianic Ahmidiyya movement. The peaceful beliefs of Ahmadis, who can be found in small numbers in Germany, are seen as heretical by most Muslims. Oliver Samson reports

Members of the Ahmadiyya community in Pankow-Heinersdorf: the group has been preaching in Germany since the Weimar Republic

​​It's been 100 years since Mirza Ghulam Ahmad founded the Ahmadiyya Muslim faith. The controversial Indian religious figure claimed to be the promised messiah awaited by all the major religions, whether Christian, Buddhist Jewish or Muslim.

His followers believed that within 300 years most of the world will join the Islamic brotherhood, which will usher in an era of peace. That goal implies worldwide missionary work, which has lead Ahmadis, as the members of the Ahmidiyya community call themselves, to proselitize the world. They've even ended up in the unlikely Berlin neighborhood of Pankow-Heinersdorf.

With a new mosque under construction and 100th anniversary parties planned, Mirza Masroor Ahmad will travel to Berlin on Tuesday, May 27. For his followers, the caliph is for followers a representative of the promised messiah. He is democratically elected by the council of the Ahmadiyyas and serves for life.

The title of "caliph" has been misunderstood by many in the West, said Islamic scholar Stephan Rosiny. A caliph is the political head of state in an Islamic community. While the practice of the worldly and spiritual leadership being united in the person of the caliph has its origins in the Middle Ages, modern Islamists have used the idea as well.

​​A recent example was the so-called Caliph of Cologne, Metin Kaplan, who, until his movement was outlawed in 2001 dreamed of starting an Islamic regime in Europe. "To equate the Ahmadis with something like that is pure sensationalism," Rosiny said.

Rosiny sees a perception problem due to people in the West viewing radical forms of Islam as the norm rather than an exception. Rosiny said that Islamic beliefs need to be taken in context. Caliph means successor and "jihad" for the Ahmidiyya movement, as for most Muslims, does not mean holy war but rather a struggle to improve oneself or society.

The Ahmadiyya movement stresses the peaceful aspects of Islam. It condemns Islamist violence and spoke out against the Fatwa against author Salman Rushdie for his novel "The Satanic Verses."

"Love for all, hate for none" is their motto.

Yet the Ahmidiyya movement is considered heretical by mainstream Islam. For most Muslims, Mohammed is the last and most important prophet, while Ahmadis believe that he was followed by others. That has won the movement enemies. In 1974, Pakistan declared followers not to be Muslims and legitimized violence against them. The caliph moved to London. 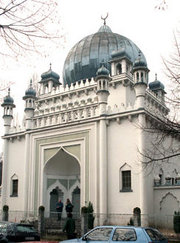 Germany's oldest mosque: in Berlin's Wilmersdorf the Lahore Ahmadiyya Movement opened a house for prayer in the 1920s

​​The group has been preaching in Germany since the Weimar Republic. In Berlin's Wilmersdorf neighbourhood the splinter group called the Lahore Ahmadiyya Movement opened a mosque in the 1920s. It is an architectural gem which remains Germany's oldest mosque.

Since the beginning of the systematic persecution in Pakistan, many Pakistani Ahmadiyyas came as asylum seekers to Germany. Worldwide there are between 10 and 80 million Ahmadiyyas.

In Pankow-Heinersdorf in the northern part of Berlin there are almost no Muslims, much less Ahmadis. The neighbourhood was chosen for the 100th anniversary celebrations because the group's first mosque in eastern Germany is being built here. The shell has just been completed after a long and vehement opposition from some of the public. There were demonstrations and initiatives against the construction. Later, a truck parked at the construction site was burned, police believe it was arson.

Wanting to be neighborly 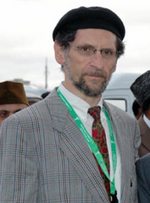 Abdullah Wagishauser, a German convert, has been head of the group in Germany since 1984

​​"I can understand the fear the people have," said Abdullah Wagishauser, a German convert, has been head of the group in Germany since 1984. "There is a fundamental distrust about Islam."

But his experience with other mosque projects is that dialogue and information can overcome this antagonism.

"After one of two years we always have a fully normal neighbourly relationship," he said.

In the meantime they have tried to smooth things over with their neighbors. In August the mosque will be opened and the first Muslim will move into the area. He won't be a missionary, but rather the Mosque's Imam.

The Ahmadiyya Community in Germany
Admonitions from the Caliph
For his followers, Hazrat Mirza Masroor Ahmad is the representative of the promised Messiah in Islam. Around 30,000 Ahmadi Muslims came to see their Caliph at the annual German meeting. By Andreas Gorzewski

END_OF_DOCUMENT_TOKEN_TO_BE_REPLACED
Social media
and networks
Subscribe to our
newsletter