The embargo on arms exports to countries involved in the conflict in Yemen recently agreed by Germany's two biggest political parties must be maintained and underpinned by binding criteria in a law on arms exports, writes Markus Bickel

It was quite something: in the final paper agreed by the CDU/CSU and the SPD at the end of exploratory talks to form a coalition government, the wording of the section on arms exports was crystal clear: "With immediate effect, the Federal Government shall not approve exports to countries that are involved in the war in Yemen." Rolf Mutzenich, the SPD's negotiator for foreign and security policy measures, had fought hard to ensure it was included.

In doing so, Mutzenich, who hails from Cologne and is also the deputy chair of the SPD parliamentary party, achieved more in one long, late-night negotiating session than disarmament activists had in the past three years. During this time, the war in Yemen has raged, yet any attempts by the Federal Government to block arms exports to Saudi Arabia, the United Arab Emirates and Egypt have so far failed.

This is why this hard-fought outcome of exploratory talks must be included in any coalition agreement – as must another promise made by the negotiators involved in the exploratory talks: "We shall further restrict arms exports and tighten the guidelines governing arms exports dating from the year 2000, thereby reacting to the altered circumstances." 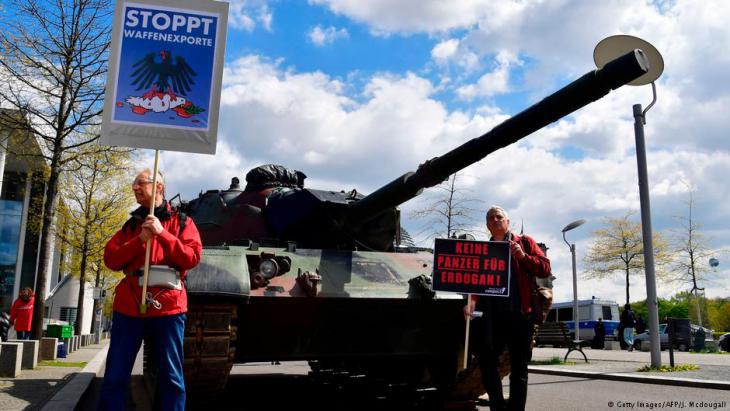 Weapons made in Germany for Recep Tayyip Erdogan: during 2017, despite Turkey′s human rights crisis and the detention of German citizens, Ankara took delivery of more arms from Germany than ever before. Some 59.5 million euros worth of weapons were supplied to Turkey last year. One year previously, the same transaction was valued at 49 million and in 2015, it was a mere 26.5 million euros

It goes without saying that vague guidelines are of no use in the long run. The only way to prevent dictatorships and state bodies involved in conflicts from getting their hands on any more German-made arms is to introduce arms export legislation with clear sanction regimes. The governments in Riyadh, Abu Dhabi and Cairo, which lead the Arab coalition against the Houthi militia in Yemen, are the very players that would be hardest hit by an embargo. For years, they have been right at the top of the list of buyers of German arms exports. Indeed, since 2015, these regimes have spent over €2 billion on German arms.


It is a good thing that Arab autocrats will not be getting their hands on any patrol boats, air-to-air missiles and military trucks for the time being. Nevertheless, this does not mean that the progress made by the pro-disarmament negotiators in the exploratory talks is guaranteed to succeed. Quite the opposite, in fact: Secretary-General of the SPD Lars Klingbeil, who supported Mutzenich during the talks, has already indicated that he will not abandon the people working in arms factories belonging to Rheinmetall, ThyssenKrupp Marine Systems and Krauss-Maffei Wegmann. The same can be said of Manuela Schwesig, minister-president of the state of Mecklenburg-Western Pomerania: because a temporary embargo on arms exports would hit the workforce at the Peene shipyard in Wolgast particularly hard, the doves in the SPD should brace themselves for a fierce wind blowing in from the Baltic coast.

Not to mention the powerful arms lobby, which is not at all happy with the result of the exploratory talks. It is likely that representatives of the Federation of the German Security and Defence Industry (BDSV), the Association of the German Army (FKH) and the German Association for Defence Technology (DWT) will step up their lobbying in the coming weeks in order to block a tightening of the guidelines in the coalition agreement. 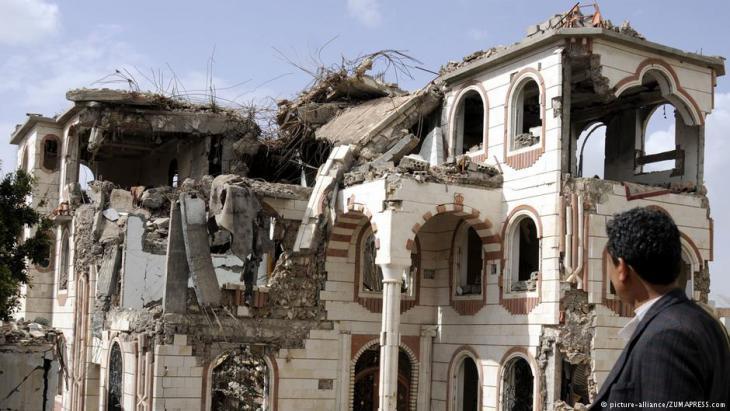 Weapons for the Saudi military alliance fighting in Yemen: The governments in Riyadh, Abu Dhabi and Cairo lead the Arab coalition against the Houthi militia in Yemen. For years, they have been right at the top of the list of buyers of German arms exports. Indeed, since 2015, these regimes have spent over €2 billion on German arms

The failure of Defence Minister Ursula von der Leyen to hinder the embargo on arms exports to Yemen, which has long been demanded by the European Parliament, in these exploratory talks is a defeat that the military industry is not going to take lying down.

The "Big Five" in this sector are generally one step ahead of the politicians anyway. Rheinmetall Defence in particular has for years being implementing a strategy of internationalisation, the Dusseldorf-based arms giant has been setting up joint ventures at locations in South Africa and the poorer regions of Sicily, where the construction of bomb factories is permitted and there is no obligation to adhere to the Act on the Control of Weapons of War and other government guidelines. These loopholes have to be closed; this is just one more reason why a law on arms exports is so urgently needed.

After all, it is not only the anti-Iranian alliance comprising Saudi Arabia, the United Arab Emirates and Egypt that is benefitting from German weaponry. Other so-called third countries are also benefitting from the watering down by Angela Merkel's government of the export principles that were defined by the coalition between the SPD and the Greens: in 2017 alone, weapons to the tune of €3.79 billion were delivered to countries that neither belong to NATO nor, unlike Australia and Switzerland, enjoy an equal footing with the Western defence alliance. This is a worrying development indeed: it opens the floodgates for the transfer of small weapons and other military equipment, which is virtually impossible to control.

Drastic increase in exports under the grand coalition 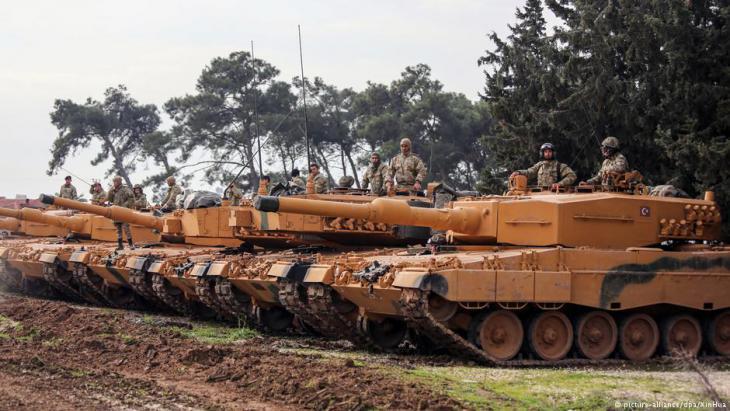 German Leopard tanks against the Kurds in northern Syria: the Turkish administration has confirmed that German Leopard 2 tanks are being used in its offensive against the YPG in Syria. "According to the Turkish government, Leopard 2A4 tanks supplied by Germany are currently being used in Operation Olive Branch, which began on 20 January 2018," reported ′Der Spiegel′, quoting directly from a parliamentary communique issued by the German Ministry of the Economy

Just how little membership of NATO acts as a bulwark against the irresponsible use of weapons is illustrated by Turkey. Because of the army's incursion into northern Syria, German Foreign Minister Sigmar Gabriel halted negotiations about the retrofitting of German Leopard 2 battle tanks. However, as is the case with the halt on the approval of exports linked to the war in Yemen, nothing has been definitively decided. The security and defence industry will do all it can to have these decisions reversed.

The representatives of Diehl Defence, Airbus, Rheinmetall and their ilk will be able to rely on the support of enough allies in the SPD, CSU and CDU. Since it began its work, the grand coalition has approved more exports than any other government in German history, namely to the value of €25.1 billion between 2014 and 2017. This is 21 percent more than in the years 2010 to 2013, when the CDU/CSU governed in coalition with the Liberals.

To ensure that these figures fall, the doves need widespread support, both inside and outside the German parliament. "It is a major success that we have pushed through this passage and I am not willing to water it down," said Mutzenich in an interview with Der Spiegel last weekend. The battle for the next coalition's arms export policy has just begun.

Journalist and author Markus Bickel worked from 2012 to 2015 as Middle East correspondent for the Frankfurter Allgemeine Zeitung in Cairo. Since 2017 he has been editor-in-chief of the Berlin-based human rights publication "Amnesty Journal".

German Middle East analyst Guido Steinberg and television journalist Ulrich Tilgner have both published new books on the conflicts in the Middle East. Their analyses and their ... END_OF_DOCUMENT_TOKEN_TO_BE_REPLACED

Nawal El-Saadawi has died in Cairo at the age of 89. The prominent doctor, activist and author became internationally known for her outcry against female genital mutilation and ... END_OF_DOCUMENT_TOKEN_TO_BE_REPLACED

As the globe races to inoculate against coronavirus, Egypt President Sisi’s regime plans to profit from the essential shot. Making Egyptians pay for their own vaccines is part of ... END_OF_DOCUMENT_TOKEN_TO_BE_REPLACED

In her documentary, the young Palestinian filmmaker Samaher al-Qadi gives us a passionate and very personal view of what it means to be an Arab woman. Her film explores the ... END_OF_DOCUMENT_TOKEN_TO_BE_REPLACED

For years the Arab intellectual elite looked to Lebanon, coveting its atmosphere of freedom. Feigning the non-existence of repression, Beirut welcomed intellectuals from across ... END_OF_DOCUMENT_TOKEN_TO_BE_REPLACED

EU parliamentarian Dietmar Koester criticises the Union's failure to speak up when faced with human rights abuses committed by its Middle Eastern allies, while pointing out that ... END_OF_DOCUMENT_TOKEN_TO_BE_REPLACED

Comments for this article: When doves cry

I see there is no word sof selling submarines to the settler colonial state of Israel. By the way, Germany does not recognize the Palestinian right of return.
Complicty in crimes for jobs, and accumlation of capital.

END_OF_DOCUMENT_TOKEN_TO_BE_REPLACED
Social media
and networks
Subscribe to our
newsletter