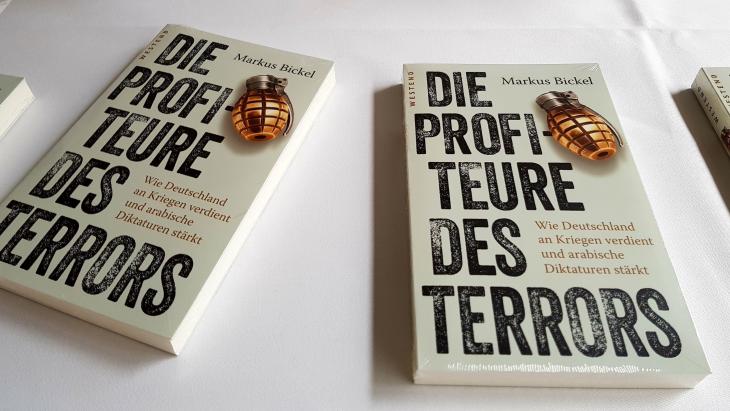 In 2011 a wave of protests swept the dictators in Tunisia and Egypt from office. The momentary ripple of alarm this brought to the capitals of the West was accompanied by a realisation of just how fragile the regimes they had believed to be stable actually were. With this recognition came the question of whether it might not be better to strengthen the forces within civil society, rather than propping up autocrats who silence their people through oppression? Six years on and the democracy movements have collapsed almost everywhere. Courted by Europe as if nothing had ever happened, dictators, old and new, are once again selling themselves as the guarantors of stability.

The autocrats need weapons and increasingly it is Germany that is coming to their rescue. Only Russia and the U.S. sell more arms. In 2016 Germany approved arms exports amounting to 13 billion euros, half of which went to so-called "third countries" outside NATO and the European Union. Amongst these were four Arab dictatorships: Saudi Arabia, Algeria, Egypt and the United Arab Emirates being among the top ten recipients of German military technology.

This, despite the fact that the German government's policy document on arms exports to third countries explicitly states that: "No licences will be granted for the export of armaments and other military equip­ment related to armaments to countries involved in armed conflict or where armed conflict is imminent".

It furthermore states that such licences should not be granted in regions "where such exports would stir up, perpetuate or exacerbate latent tensions and conflicts". Germany, therefore, according to its own guidelines, should not be delivering weapons. According to these guidelines there should be no arms sales to Saudi Arabia, Qatar, Egypt or the Kurdish peshmerga in Iraq. But in the war on terror, nobody is looking too closely at the rules. And the German government does not feel the need to justify its decisions. 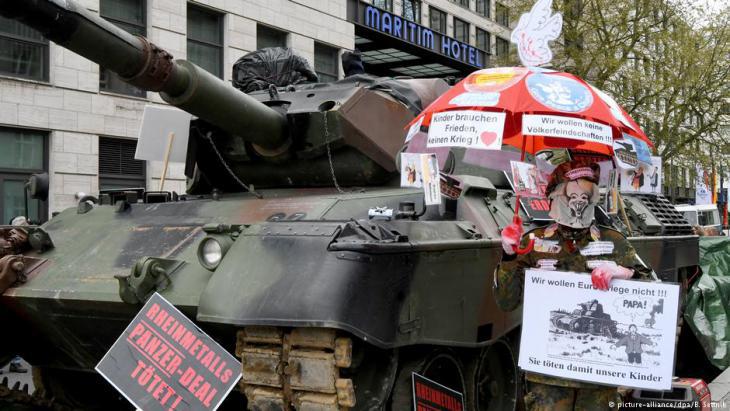 Protesting arms exports to despots in all four corners of the globe: as recently as July, the German government approved arms deals worth millions with Saudi Arabia and Egypt. The Federal Security Council granted the export to Saudi Arabia of 110 trucks produced by Rheinmetall MAN Military Vehicles GmbH. Also part of the consignment were four patrol boats from the Lurssen wharf, as well as military equipment and supplies provided by Fritz Werner Industrie-Ausrustungen GmbH. Egypt took delivery of a submarine produced by ThyssenKrupp Marine Systems

In his book, Markus Bickel, former FAZ editor in Cairo and now chief editor of the Amnesty Journal, provides a detailed overview of German arms exports in the region and the fatal part they play in conflict escalation.

The lessons from the Arabellion, it seems, have been quickly forgotten. Today there has been a return to the idea that an approximation of stability is best achieved by supporting those inept dictators committed to habitual repression; which, in fact, is the primary cause of tension and conflict.

Doing deals with the junta

One of Bickel's most shocking examples of Germany's support for the autocrats comes from Egypt. In October of 2011, hundreds took to the streets to demonstrate outside the state radio building in the Maspero district of Cairo. Suddenly a military vehicle drove into the crowd at high speed and twelve people were killed in what became known as the "Maspero Massacre". It was to prove a turning point for the Egyptian opposition and a forewarning of the military's return to the political stage. The vehicle used was a TH39 model Fahd Armoured Personnel Carrier, manufactured by German armaments company Thyssen. Germany had already been supplying arms to the Egyptian security forces during Mubarak's time, but during the significantly more repressive regime of Abdul Fatah al-Sisi, those sales increased. 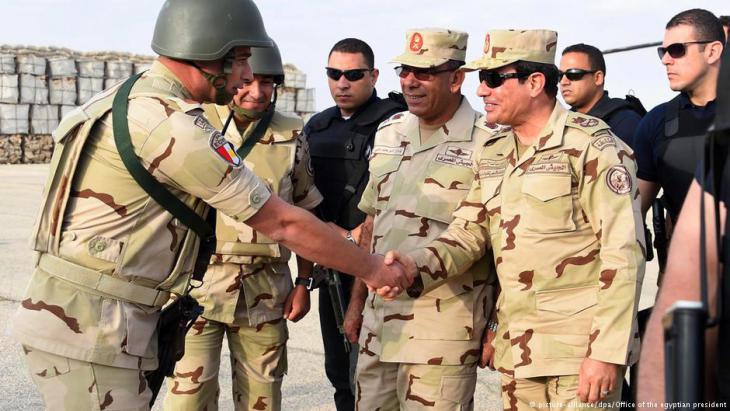 Dictators make for good business: Markus Bickel condemns German policies on Egypt since the fall of Mubarak as "devoid of principle" and of "conniving complicity" in its relationship with Sisi, who now suppresses any form of opposition

Bickel's in-depth research puts flesh and bones on the bare statistics, clearly showing what the consequences are for the countries involved. He also outlines the background to the most significant of the current theatres of conflict, from Syria to Libya and Yemen to Iraq.

In this highly readable study, the writer shows clearly that we are deluding ourselves if we think that such arms cannot fall into the hands of others. A document such as the so-called "end-user certificate", he says, could only be dreamt up by German officialdom. This certificate requires recipients of guns, equipment or ammunition to undertake not to sell these to third parties. In failed states such as Iraq, Syria and Libya, this kind of official control is worse than useless. Soon after the delivery of G36 rifles to the Kurdish peshmerga, they appeared for sale on the black markets of Sulaimaniya and Erbil.

According to Bickel, the militarisation of German foreign policy is down to economics and the fear of falling behind other countries in the race to seal major commercial deals in the Gulf and Egypt, which in turn lead on to other projects.

In what is reckoned to be the largest ever single order, Siemens signed a contract worth around eight billion euros to supply gas and steam turbine power plants to Egypt in 2015. Gas turbines, of course, are not of themselves a problem, but everyone knows that the hopelessly indebted Egyptian state will never be able to pay for them. Sooner or later it will be down to the German taxpayer to foot the bill. 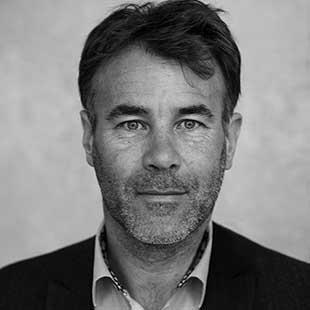 Egypt is simply "too big to fail," says Bickel and condemns German policies on Egypt since the fall of Mubarak as "devoid of principle" and of "conniving complicity" in its relationship with Sisi, who now suppresses any form of opposition. It is also worth noting that the German Interior Ministry increased its co-operation with the Egyptian security services in July of 2016.

However it is not only in matters Sisi that Germany's policy makers maintain a stony silence. Another unfortunate chapter in German policy is the attitude taken to the conflict in Yemen. Criticism of Saudi Arabia and the Gulf states for their campaign against Yemen, which led to what is currently the largest humanitarian disaster in the region, has been conspicuous by its absence. The action by the Saudi-led alliance succeeded only in creating new places of refuge for al-Qaida and IS; the opposite of what should have been the objective.

In Yemen too, rifles made by German manufacturer Heckler & Koch have been found, as have bomb parts from a subsidiary of the Rheinmetall company. Experience in recent decades has shown that the more weapons there are in a country, the greater the risk of conflict escalation.

The best example is Iraq, a country supplied with a massive amount of arms by the West (including Germany, which supplied components for poison gas) in the 1980s. After the fall of Saddam Hussein and the invasion by the Americans, 650,000 tons of this ammunition fell into the hands of IS and made possible their military successes in June and July 2014 – a development that made it necessary to increase the supply of weapons to halt the march of the jihadists.

It has become a vicious circle with no easy way out, as Bickel is very well aware. He points to the alternative of "soft powers" such as development aid and civil conflict resolution and calls for civil society to be given greater support. Unfortunately, his suggested alternatives remain vague. In his keen analysis of the contradictory nature of German policy in the Middle East, however, he is focused, clear-sighted and assured.

Political analyst Taqadum al-Khatib argues that Egypt can, in co-ordination with its European partners, develop a common vision to solve the complex conflict in Libya. For this to ... END_OF_DOCUMENT_TOKEN_TO_BE_REPLACED

The upheavals of the past year in the MENA region are arguably as momentous as those of the Arab Spring in 2011. Yet perhaps the biggest difference is that our interest seems to ... END_OF_DOCUMENT_TOKEN_TO_BE_REPLACED

In 2019, the long-running Penguin Classics series released its first novel translated from Arabic: Tawfiq al-Hakim’s "Return of the Spirit", conveyed into English by William ... END_OF_DOCUMENT_TOKEN_TO_BE_REPLACED

Equality in divorce, a ban on polygamy: reformers of Islamic family law have a clear agenda. They are exploiting the ambiguity of traditional jurisprudence. By Joseph Croitoru END_OF_DOCUMENT_TOKEN_TO_BE_REPLACED