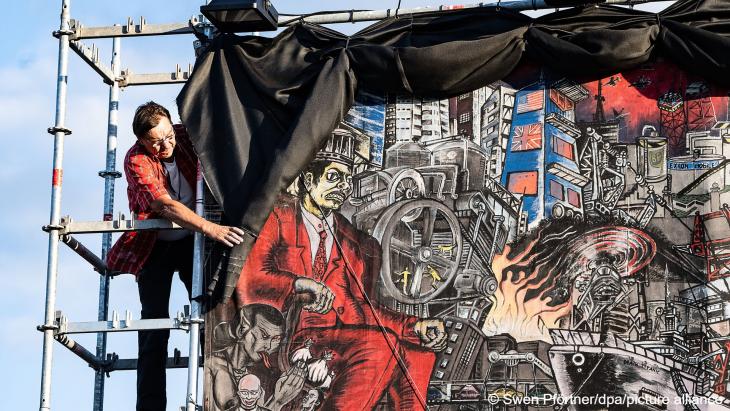 An art work on show at one of the world's most important contemporary showcases has been covered up in Germany after a simmering row over anti-Semitism escalated days after the exhibition's opening.

The banner, by Indonesian artist collective Taring Padi, is being covered, the documenta said on Monday evening after a decision was taken by the collective, the management and artistic direction.

The move came after several groups demanded the removal of large-scale banner that features a soldier with a pig's face wearing a scarf with a Star of David and a helmet with the inscription "Mossad". the name of the Israeli intelligence agency.

The Israeli Embassy has expressed outrage at the image, while the American Jewish Committee Berlin demanded the immediate dismissal of documenta director Sabine Schormann.

"The elements shown in some exhibits are reminiscent of the propaganda of Goebbels and his henchmen in dark times of German history," the embassy said. "They have absolutely nothing to do with freedom of expression, but are an expression of old-style anti-Semitism."

Earlier, the director of the Anne Frank Education Centre, Meron Mendel, German Culture Minister Claudia Roth and the president of the Central Council of Jews in Germany, Josef Schuster, also slammed the work.

"These pictures leave no room for interpretation at all. This is clear anti-Semitic incitement," said Mendel. Alongside his demand that the work to be covered up or removed, Mendel called for a discussion of the problems surrounding this year's documenta.

The documenta organisers have already faced accusations of anti-Semitism in the run-up to the show over the inclusion of artists and groups that support a cultural boycott of Israel over its treatment of Palestinians.

This edition of documenta is being curated by the Indonesian art collective Ruangrupa, which has rejected the earlier criticisms, calling instead for discussion.

The latest spat comes after Germany's president criticised what he called a "thoughtless, frivolous" approach by some artists toward Israel as he opened the sprawling exhibition on Saturday.

"Art is allowed to be offensive, it should trigger debate. But the line is crossed when criticism of Israel turns into questioning its existence," President Frank-Walter Steinmeier said.

The recognition of Israel as a nation is the basis and prerequisite of any debate in Germany, he said.

Next to the Venice Biennale, the documenta is considered one of the world's most important contemporary art exhibitions. The 15th edition of the documenta, a three-month spectacle which puts the city of Kassel on the art world map every five years, runs to 25 September.    (dpa)

END_OF_DOCUMENT_TOKEN_TO_BE_REPLACED
Social media
and networks
Subscribe to our
newsletter