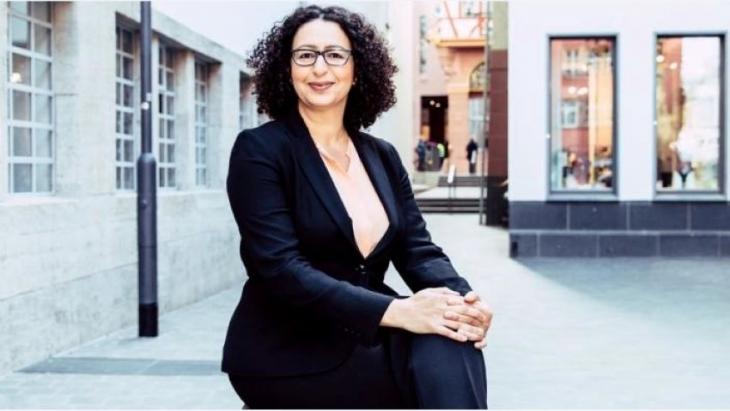 Lamia Messari-Becker, 48, is professor of construction technology and structural physics at the University of Siegen. Until June 2020, the native Moroccan was a member of the German government's Expert Council on the Environment. Messari-Becker is a member of the Club of Rome International, which campaigns for a sustainable future for humanity. She spoke to Sven Lilienstrom about democracy, climate protection and sustainability

Professor Messari-Becker, what do democracy and democratic values mean to you personally?

Lamia Messari-Becker: I perceive democracy to be the soul and the backbone of a society that lives in freedom, peace and equality. Our constitution provides the fundament and the instruments with which we can solve all challenges and make progress together. This is especially evident in times of crisis. We’re in good shape and there’s no better system as far as I’m concerned.

But democracy needs to be lived and defended on a daily basis. The view that our democracy and the instruments of parliamentary democracy aren’t enough to shape the future is now coming from quite unexpected places. One example that I experienced myself: in 2019, the German parliament’s environmental committee proposed that a new council for generational justice should be granted a suspensive veto against laws in parliament.

In support of its idea, the committee published a report that spoke of the "threat of a veto and ensuing ‘media echo’, putting pressure on political decision-makers, … so that they can be forced if necessary". When I hear such things, the democrat in me sits bolt upright! What in heaven’s name is this language, this approach? I was and am absolutely against such an initiative. I do fear that many people these days take democratic values for granted.

You yourself were born in Morocco. How can more people with a migrant background be encouraged to participate in Germany’s democratic processes?

Messari-Becker: I note the subtext of your question – that migrants are less involved in the democratic process in Germany. I beg to differ on that point. In my experience, too few people engage with democracy generally. Background is of secondary importance here. In actual fact, many migrants engage with democracy and co-determination because often they’ve experienced disregard for democratic values in their heritage nations.

What’s also important to me: it would be of huge benefit if people with such backgrounds were more robustly integrated, simply by dint of their expertise, their engagement, their work and achievements – if all doors were open to them. This would incidentally give rise to positive role models, who would in turn help to bring about a normalisation and a relaxation of attitudes – much more than any quota could do.

As a member of the environmental committee, I advised the German government for four years (2016-2020) on civil engineering and sustainable urban development, issues of huge environmental relevance. I was the first practicing civil engineer to sit on the committee. That was a key point for me. It’s quite possible that I was also the first advisor on this committee with a Jewish-Muslim migrant background. That was of secondary concern to me. To others, it was evidently not.

I was asked: “How does someone like you end up in a vocation such as this?” Regarding my rejection of the veto right for a “generational justice committee” in parliament, I was told: “You don’t know anything about our laws”. But I do! I’ve been living in Germany since 1992 and dream in German. The constitution, our shared foundation, should be familiar to everyone regardless of their religion, language or culture. After all, these are our laws. 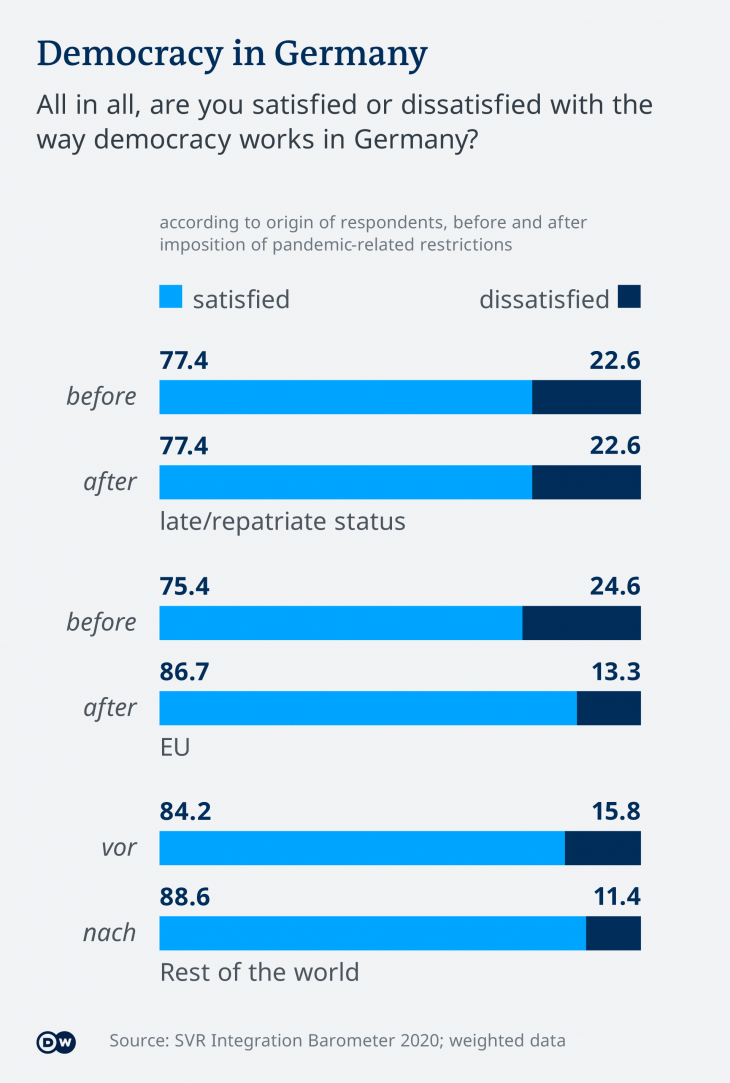 Dare more democracy: the coexistence of people with and without migration history has improved, as the integration barometer published by the expert council of Germany's Foundations for Integration and Migration (SVR) shows. Even during the coronavirus pandemic, confidence in the German state among people with a migration background has remained high. Nevertheless: "Democracy must be lived and defended every day!" emphasises Lamia Messari-Becker

Regarding the United States: Joe Biden has returned the United States to the Paris agreement. What’s your view of this move and what more do you expect Washington to do regarding environmental protection and sustainability?

Messari-Becker: It’s good news. It’s important to have all nations on board, because climate protection can only be solved on a global level. Global warming can only be halted with massive reductions in carbon emissions. That’s why everyone must play their part. From the United States, as one of the world’s top economic powers, I would hope that it will join the push to clean up the global economy to connect climate protection and progress.

We need a global alliance for a closed-loop economy. After all, 40 percent of the population of Africa has no access to clean drinking water, affordable energy etc. Resource consumption is set to rise exponentially. We need to uncouple this from environmental damage – through greater efficiency, closed-loop economics and clean energy. Nothing else will work.

You’ve said that although you support the “Fridays for Future” climate protests, you’re critical of some of their actions. What is it that you find problematic within the movement or in the case of individual activists?

Messari-Becker: For me, holding a critical viewpoint isn’t automatically an accusation of anything. I’m very much in favour of a little verbal disarmament when we’re haggling over the best solutions. The Fridays for Future movement is the expression of an active civil society within a democracy and it has achieved a great deal. All parties now need to formulate a policy response to climate change. The Fridays for Future movement can also claim credit for this. But right from the outset, there were emotive statements that I consider to be difficult in a democracy.

I’m thinking of declarations such as "No compromise on climate". But compromise is the essence of a democracy. Even when the challenge is an epochal one such as this. Many people rightly took issue with this statement, including the former German President of the Bundestag Wolfgang Thierse. We need compromise so that everyone is involved and stays together. In the meantime, I’m registering a more constructive approach. I hope that as the dialogue progresses, the demands will become less radical and more practicable and agreed. We’re only going to solve this task in cooperation, only by building bridges, not in conflict with each other.

You are a member of the International Club of Rome. How does this group contribute to finding answers to the global questions of the 21st century? Aren’t “elite circles” such as these something of an anachronism?

Messari-Becker: With the book "The Limits to Growth" almost 40 years ago, the Club lifted an important subject onto the world stage – and what are we concerned with today? The very same thing! The Club has also placed key focus on the issue of dwindling resources. A problem that many are still completely ignoring. Currently, there are a number of impulse pamphlets to mention, including Climate-Planetary Emergency or Rethinking Finance. Elite? That’s not how I see it.

But it is a limited circle of 100 members, so that we can work out positions together. And a shared goal of all members and honorary members, whether they are former heads of government, scientists, local politicians or retired people, is to contribute to a sustainable future for humanity – a profoundly social goal in the global sense.

Professor Messari-Becker, to close we’d really like to know: how sustainably do you live, how do you save resources and are there things that you’d still like to improve within your own "four walls”

I live in a house from the 1960s. Instead of tearing it down my husband and I – with a huge amount of effort – retained the substance, because there’s a whole load of “grey energy” there. As a civil engineer, I’m well aware that demolition and new build isn’t sustainable per se. We renovated the house and raised the roof with a timber extension. This more than halved its energy requirements. The next step is to switch over to modern heating technology. Otherwise, I like buying vegetables that aren’t uniform in appearance. They’re labelled as "wonky", but they’re just as Nature intended.

The issue of immigration: German monoculture is a thing of the past

What it means to be German: Recognise the potential

Exile and integration: the double whammy

Iranian artist Parastou Forouhar has lived in Germany since 1991. Full of rage, just like the protesters, she hasn't yet given up on the idea of justice. By Julia Hitz END_OF_DOCUMENT_TOKEN_TO_BE_REPLACED

Unflattering terms were used at a German Football Association human rights congress aimed at "intensifying the discussion" ahead of the World Cup. One speaker in particular made ... END_OF_DOCUMENT_TOKEN_TO_BE_REPLACED

Fariduddin Attar’s "The Conference of the Birds", one of the seminal works of Islamic mysticism, has recently been published in sumptuously illustrated German translation. It ... END_OF_DOCUMENT_TOKEN_TO_BE_REPLACED

Egyptian authorities have Mada Masr in their sights once again after critical reporting. But the editor of the country's last independent news source is adamant they will continue ... END_OF_DOCUMENT_TOKEN_TO_BE_REPLACED

Like Christianity, Europe's history is one of migration. Both have strong roots in the Orient and in cultures thousands of years old. Cultural historian Bernhard Braun invites us ... END_OF_DOCUMENT_TOKEN_TO_BE_REPLACED

END_OF_DOCUMENT_TOKEN_TO_BE_REPLACED
Social media
and networks
Subscribe to our
newsletter