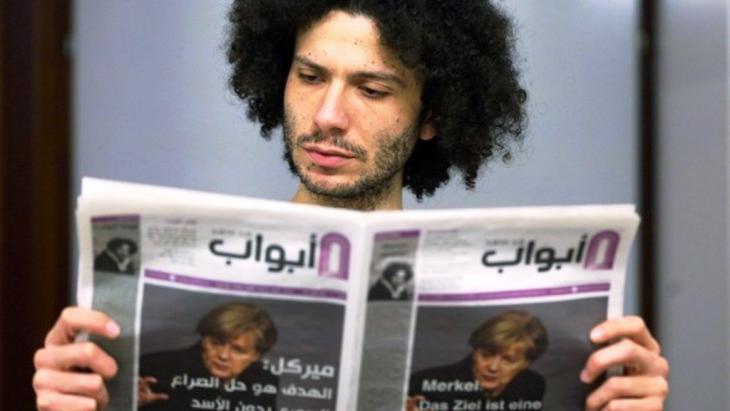 "Abwab" – the Arabic for doors - is the name of the first and so far the only Arabic newspaper for refugees in Germany. It aims to provide information and serve as a platform for discussing integration-related issues. Ceyda Nurtsch spoke to publisher Ramy al-Asheq

You could find yourself lost for words trying to describe Ramy al-Asheq. The young man with wild, curly hair is a Palestinian from Syria, stateless, a refugee, an activist, a poet, journalist, visionary, strongly opinionated and, currently, a one-man operation. He is editor-in-chief of the first and so far only Arabic newspaper aimed at refugees, or "newcomers," as al-Asheq prefers them to be called. "We don't like the expression 'refugees', because it separates people who have been forced to seek asylum from everyone else. Besides, in six or seven years, these so-called refugees will no longer be refugees, but new Germans. That′s what we should focus on."

The project began in December 2015 with 16 unpaid writers and a print run of 40,000. It has since grown steadily. Today, 45 volunteer writers contribute to "Abwab". They come from Germany, Yemen, Iraq, Eritrea, Syria, Palestine and Lebanon.

"Abwab" now has a print circulation of 70,000 copies and is distributed in over 500 refugee centres and language schools throughout Germany. The paper also has its own website. Ramy al-Asheq co-ordinates, organises and designs the layout for the paper from his office at home. The newspaper is sponsored by Moneygram and Ortel, which see a new market in the Arabic-language community, says al-Asheq. This covers the printing and distribution costs. The publisher is the Frankfurt and Britain-based New German Media Group.

Wealth of information about Germany

The monthly newspaper comprises 24 pages, two of which are in German. The contents of "Abwab" lead readers into a range of different worlds. For instance, "Open Door" informs newcomers about topics relating to Germany, the law, the system and food. "Your Door" is dedicated to topics concerning women and feminism. The "Eastern Door” reports on the Arabic-speaking community and events. In addition, there are sections dealing with success stories, heroes and even caricatures. 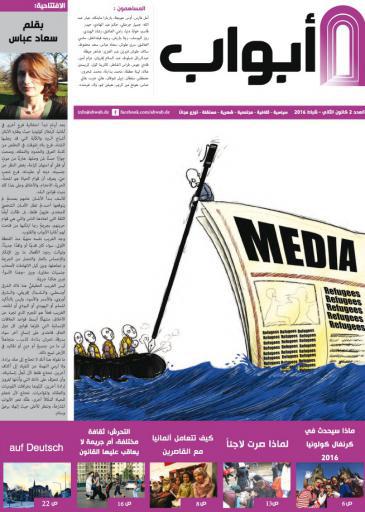 "Open doors" for refugees: in addition to news from their home countries, publisher al-Asheq features major issues about Germany. Practical advice is also given – such as how the registration process in Germany works. The free monthly was first published at the end of 2015 with a circulation of 45,000 copies. The newspaper is financed by advertising

When al-Asheq arrived in Germany, he noticed that there was no specifically Arabic information outlet in the German media landscape. Hence, the idea of "Abwab" was born. "My idea was to build a bridge between communities and to tear down all stereotypes. And these exist on both sides."

Not are newcomers the sole target group. To date, Arab immigrants long since settled in Germany have had no media outlet either. "Abwab" aims to provide these groups with a voice. "We want to establish a cultural body that does not belong to a political "mafia", to use an Arabic expression," says al-Asheq, describing his vision. "Every political group has its own media, financed through political funds. What I find interesting is the idea of creating a free and democratic forum for writers."

In addition, he is hopeful that "Abwab" will become a platform for discussion open to and used by all, including non-Arabs. In this way, it will also open a door onto the Arab community. The ultimate goal is to publish an increasing number of articles in both Arabic and German. Al-Asheq's long-term vision is for "Abwab" to establish itself within the media landscape, not only reaching Arabic speakers in Germany, but also throughout the whole of Europe. A website with videos and discussion forums is intended to promote this concept.

"Whoever passes through a door should hold it open for others. That′s how I understand my own responsibility," he says, explaining his motivation for the project. His own personal door-opener was his German-Italian host family, with whom he spent quite a lot of time, explains al-Asheq. He is also a refugee, something that he has been for his entire life. Al-Asheq was born in 1989 and grew up in Yarmouk, a southern district of Damascus which was home to around 18,000 Palestinians before the war. Since the incursion of IS troops, the UN has described conditions in the area as "beyond inhumane."

Al-Asheq joined the revolution, lived in hiding, sought refuge in Jordan and was eventually caught and detained. After a number of attempts, he finally managed to escape imprisonment, lived illegally in Amman with forged papers and, during this period, published his first book of poems dedicated to the revolution. He wrote songs, won a literature prize in Palestine and eventually received a scholarship for his poetry from the Heinrich Boll Foundation. He has been living in Germany since November 2014. He is learning German, continues to write poetry and would like to play a part in German society.

"Normally, people talk about refugees, not to them. This project is our opportunity. We have a lot to offer in the fields of art, journalism, politics and economics. We are new here, but can become part of this society," he says. 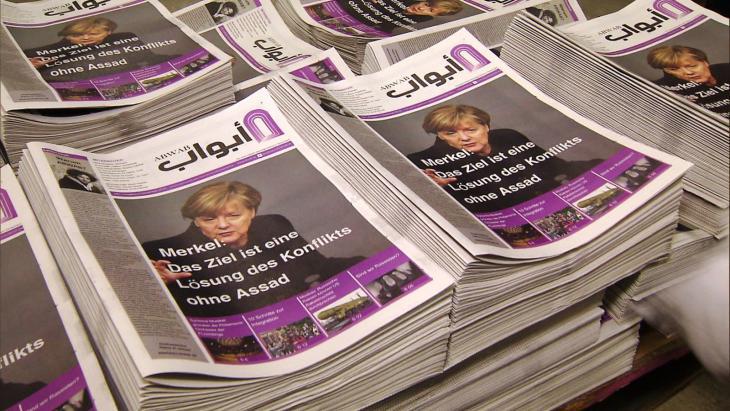 Bridging the communities: Not are newcomers the sole target group. To date, Arab immigrants long since settled in Germany have had no media outlet either. "Abwab" should lend them a public voice. In addition, he is hopeful that "Abwab" will become a platform for discussion open to and used by all, including non-Arabs

Freedom is something that has to be learned, something he is reminded of every day. "We all come from countries ruled by dictatorships. I still run when I see the police. It isn't easy for us to say what we would like to do with our freedom. Our anxieties remain very deep-seated."

Nonetheless, he absolutely wants to make use of these freedoms. This has led to frequent criticism, even from his own ranks. Such was the case when he got involved in a discussion about refugees and criticised the new German law on integration. This resulted in a terse exchange with Isabel Shayani, an editor with the German broadcaster WDR. He called the current proposals "one-way street integration," unlikely to open any doors for refugees.

He is convinced that integration can only function when it occurs in both directions. His criticism is addressed directly to the government, NGOs and refugees themselves. Some NGOs have attempted to instruct refugees in how to behave in a "civilised society." He angrily cites one such example. "Brochures have been distributed in refugee centres explaining how to use a toilet. That′s disgraceful." He sees the key to integration in learning about the other group, engaging in common discussion and showing mutual respect.

The much vaunted "welcoming culture," which to a large extent has been the work of volunteers, is appreciated by Ramy, yet he remains sceptical. Before it can truly be seen as a culture, it needs to demonstrate its permanence. Nor are the many "Thank you, Germany!" gestures on the part of the refugees enough. "Such gratitude will soon disappear if we fail to become truly involved in German society," he says.

Giessen, Eichsfeld, Kusel, Berlin – cars bearing old German number plates are the latest trend on the streets of Cairo. Many Egyptians regard the discarded plates as chic. What ... END_OF_DOCUMENT_TOKEN_TO_BE_REPLACED

Tunisia has been going through a severe economic and political crisis in recent years. More than one in three young people there are unemployed. For many skilled, qualified and ... END_OF_DOCUMENT_TOKEN_TO_BE_REPLACED

German imams have publicly expressed their solidarity with the women of Afghanistan. In a letter of protest, the clerics say that the Taliban regime's decree barring women from ... END_OF_DOCUMENT_TOKEN_TO_BE_REPLACED

At the end of every year, the team at Qantara.de gives you a run-down of the ten most-read articles on the site over the past 12 months. Here is a quick overview of the stories ... END_OF_DOCUMENT_TOKEN_TO_BE_REPLACED

Social engagement is often motivated by religious factors. A new book explores the background to these community efforts and appraises how effective they are in helping to ... END_OF_DOCUMENT_TOKEN_TO_BE_REPLACED

The government in the Netherlands, one of the last European nations to abolish slavery, has made an historic apology. But some feel that there is still a long way to go. By Ella ... END_OF_DOCUMENT_TOKEN_TO_BE_REPLACED
Author:
Ceyda Nurtsch
Date:
Mail:
Send via mail

END_OF_DOCUMENT_TOKEN_TO_BE_REPLACED
Social media
and networks
Subscribe to our
newsletter