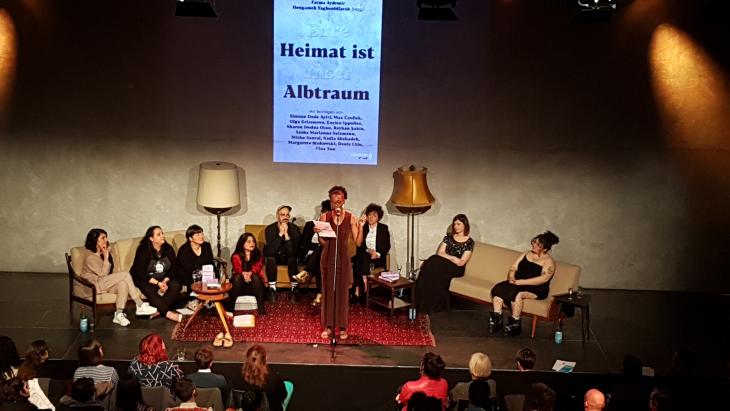 "Your homeland is our nightmare"

A recently published anthology – "Eure Heimat ist unser Albtraum" – edited by Fatma Aydemir and Hengameh Yaghoobifarah is both accusatory and motivational. Ceyda Nurtsch read the declaration and attended the launch

The timing was chosen deliberately: the German book "Eure Heimat ist unser Albtraum" (Your Homeland Is Our Nightmare), edited by Fatma Aydemir and Hengameh Yaghoobifarah, was launched to coincide with the first anniversary of the re-naming of the German Ministry of the Interior as "Bundesministerium des Innern, fuer Bau und Heimat". The ministry translates this into English as "Federal Ministry of the Interior, Building and Community", thus avoiding the controversial word "homeland".

In the book, the intellectual frontwomen and men of the German integration debate, including Margarete Stokowski and Deniz Utlu, vent their frustration while recounting life-long, if not generation-long, everyday experiences of racism.

Some of the texts are angry in tone, while others are defiant, humorous, embittered or hopeful. They constitute a manifesto against an understanding of homeland as a glorified nationalist concept, lodging a plea for greater awareness that individuals can have several homelands. They are a rebellion against right-wing violence, discrimination and thinking in stereotypes. They demand to be heard in a society where people with migration backgrounds have long been talked about rather than talked to.

A range of topics – one overriding feeling

Some of the texts touch on a variety of topics at once. These range from discrimination on the street for not complying with heterosexual norms to burning down asylum centres. The reader is tempted to ask: can all of these subjects really be subsumed under the same context? Sasha Marianna Salzmann's text "Sichtbar" (Visible), for example, broaches many different issues, one might say too many: assimilated Jews in the 20th century, discrimination against homosexuals, gender theories, Alice Weidel and the AfD (Alternative for Germany) Party. 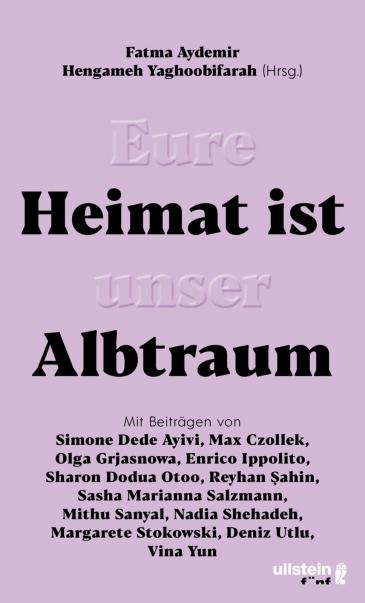 "It remains to be hoped that these German-language authors with their strong voices will not allow themselves to be pushed into a corner, ranting against the views of the majority society and allowing their concerns to be dictated to them, but will instead make themselves heard far and wide," says Ceyda Nurtsch

The author, who immigrated to Germany with her family in 1995 as a Jewish "quota refugee", has an answer to this question. "My topic is multiple discrimination and how it works," she explained at the book launch party. "That's why I think it's important to not just write about being discriminated against as a Jew or because of my gender identity. There are so many different fields that affect me. And I believe that, even if readers can't really relate to everything, they can get a feel for how complicated it can be when you're not seen as normal."

Because all of this together – and she sounds astoundingly undramatic as she says it – makes up her life.

Being different as common denominator

And basically that's what the texts are all about: the feeling of being defined and objectified by the majority society. And about making one's voice heard – not only for personal reasons, but also on behalf of all those who have not been able to do so in the 70 years of German migration history.

Salzmann writes that she sees the solution to the problem she shares with so many others, namely the "knowledge of falling through the cracks" and "never being normal", in showing solidarity with one another. "We will be there for each other even when the majority society just stands by and watches without stepping in to help." She continues: "We must organise our own network; if we are in danger, we have to be able to rely on each other. We are the alternative for Germany." Or, as Simone Dede Ayivi puts it, wrapping up the book, "Home is wherever you are".

In his text "Beleidigung" (Insult), author Enrico Ippolito has his protagonist's girlfriend argue against this "you and me against the world" approach. "Things will never change if you arenʹt equally willing to speak to people who maybe are not so politically correct. That doesn't mean they're all racists. Some just don't know any better."

This raises the question of whom the book is actually intended for. While the title "Your Homeland Is Our Nightmare" suggests that the authors are interested in a dialogue with the majority society, albeit a reproachful one, the dedication "For us" can be interpreted more as a withdrawal into their own community.

Editor Fatma Aydemir claims that the book is addressed "to everyone". But also says: "We address each other. We wanted to make an inspirational book for ourselves. For us authors. For us as a community. We also wanted to make a book for the many young people who feel left out. Because being part of a minority also means feeling lonely sometimes. With this sort of book, which provides a platform for so many voices speaking from different perspectives, we wanted to show that these positions exist, these realities of life exist, you are not alone."

The texts that focus on personal experiences are particularly powerful. Nadia Shehadeh's trenchantly humorous commentary about constantly being perceived as a menace. Fatma Aydemir's memories of her parents' work situation. The talk Sharon Dodua Otoo, winner of the Ingeborg Bachmann Prize, has with her son about how to prepare a black son for life in the white majority society.

Yet the words lose something of their impact when they succumb to just what they accuse the majority society of – generalisation. "In the minds of the Martins, Melanies and Dominiks, the same stereotypical images always rose to the surface when it came to the subject of racism: either raging skinheads or, alternatively, Ossis [East Germans] in general," writes Enrico Ippolito for instance.

But Ippolito sees disagrees. "That conclusion fails to recognise the true power structures at work," he says. "Believing that there's some kind of 'reverse racism' doesn't work when we talk about power and see who has power and who doesn't. The Germans are the majority society. They write the laws. They are the ones who make the decisions in so many areas. And I think that's a trick that doesn't work – to say 'you are also using racism against us'."

The standing ovation at the sold-out book launch in Berlin certainly demonstrated one thing: for the new Germans, this book is long overdue. It remains to be hoped that these German-language authors with their strong voices will not allow themselves to be pushed into a corner, ranting against the views of the majority society and allowing their concerns to be dictated to them, but will instead make themselves heard far and wide.

On 10 September, WDR, the public broadcaster in Germany's most populous western state, introduced the 28-year-old journalist Nemi El-Hassan as the new presenter of its popular and ... END_OF_DOCUMENT_TOKEN_TO_BE_REPLACED 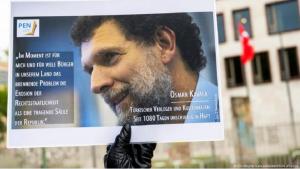 A crucial test for EU–Turkey relations

The long detention of philanthropist Osman Kavala and Turkey's refusal to acknowledge an ECHR ruling could cost the country its membership or voting rights in the Council of ... END_OF_DOCUMENT_TOKEN_TO_BE_REPLACED

The work of artist Marwan Rechmaoui is both minimalist and complex and embodies the faultlines of his home city. Some of his latest pieces are now on show at a leading Beirut ... END_OF_DOCUMENT_TOKEN_TO_BE_REPLACED

The memory of experienced injustice plays a central role in the transformation of societies towards democracy. In the Arab world, the critical study of memory is only just ... END_OF_DOCUMENT_TOKEN_TO_BE_REPLACED

The streaming festival "Female Voice of Afghanistan" by the Zeitgenössische Oper Berlin gives Afghan female musicians a global platform – at a time when their situation has ... END_OF_DOCUMENT_TOKEN_TO_BE_REPLACED

Western states have fought against terrorism not only in Afghanistan, but also in Syria and Iraq – leaving behind people who were once their partners in fear and poverty. Hisham A ... END_OF_DOCUMENT_TOKEN_TO_BE_REPLACED
Author:
Ceyda Nurtsch
Date:
Mail:
Send via mail

END_OF_DOCUMENT_TOKEN_TO_BE_REPLACED
Social media
and networks
Subscribe to our
newsletter