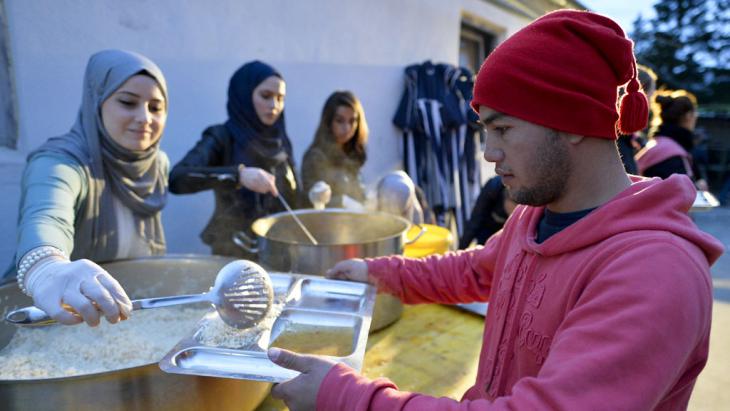 Germany′s Muslims and the refugees

What do Muslim migrants who have already lived in Germany for many years think about the recent arrivals and the European refugee crisis? Canan Topcu found out what Afghan, Turkish, Arab and Bosnian migrants in Hesse have to say

When Fatah Qayumie talks about the recent wave of refugees, he can look back upon his own experiences. He feels that his integration into German society was helped by a quick asylum hearing and, soon afterwards, being able to attend a German language course as well as start work. "Having a job is very, very important," says Qayumie. He doesn't agree that the state should, as he says, "prop people up," since that makes them too comfortable to look for work.

It has been almost three decades since Qayumie fled to Germany from Afghanistan. He made his way here with his wife and six-month-old daughter. The family was granted asylum in Germany after a half a year and Qayumie began work –first as a cleaner, then a taxi driver and later as a letter sorter at the post office, until he eventually started his own business.

Qayumie is now 51 years old. He has five children and his own home on a housing estate near Giessen. He is in the facility management sector and his company employs 70 people. He has achieved far more than most politicians and labour market researchers expect from migrants. Why shouldn′t the newcomers do the same?

″Too many at once″

The problem, as Qayumie sees it, is that "too many have come all at once." He believes the German Chancellor is partly responsible. The result of Angela Merkel's claim that "We can do it!" is that now "those who are not necessarily leaving their country because of war" are coming here too. He includes "economic refugees from the Balkans" as well as "people from Pakistan and Afghanistan" in this category.

While the politicians are debating whether to classify Afghanistan as a safe country of origin, Qayumie has a clear position on this issue. "There are no reasons to leave Afghanistan other than economics," he asserts in a conversation after Friday prayers. 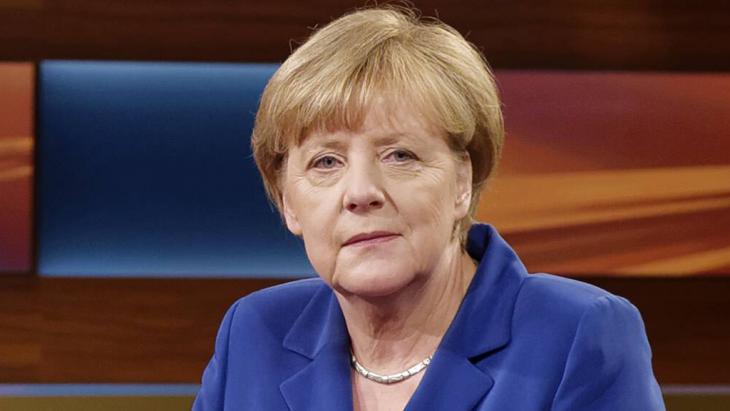 Sceptical about the new arrivals: Fatah Qayumie believes that "too many have come all at once." He believes the German Chancellor is partly responsible. The result of Angela Merkel's claim that "We can do it!" is that now "those who are not necessarily leaving their country because of war" are coming here too

Qayumie is one of the few Muslims that criticises Merkel for her position on the refugee situation. Most remain loyal to "our Chancellor" and have nothing but praise for Merkel. Quite a few Muslims feel that the "we" in Merkel's remark is addressed to them.

A young woman from Frankfurt, the daughter of Turkish migrant workers, sees this as the crux of the matter: "I think that I can and must make my own contribution within my 'microcosm' so that sometime in the far distant future I can say that I was part of this social challenge, that I got involved and made a difference."

The Chancellor's "we" appears to be motivating people to help. Everywhere in the country, countless Muslim communities are active in providing assistance to refugees. They collect clothing and financial donations. Members of the community are active as translators or helping to look after refugee children and young people.

The commitment by mosque communities is completely based on voluntary activity without any institutional support. Islamic associations have continuously stressed this point over the past few months, thereby also reacting to criticism that they have done too little in assisting refugees. It is true that the mosque communities, whether part of an association or not, lack professional staff and the necessary financial resources. In contrast to Christian organisations and charities, they do not receive any state subsidies.

Ahmed Araychi, an industrial foreman, serves on the board of a mosque association that mainly consists of Muslims of Moroccan origin. He views it as important to highlight his community's commitment to helping refugees. "When things are bad in Germany, we Muslims are also affected. We therefore have a duty to make our contribution, so that our country can solve its problems," says the man in his mid-forties with a persuasive voice. 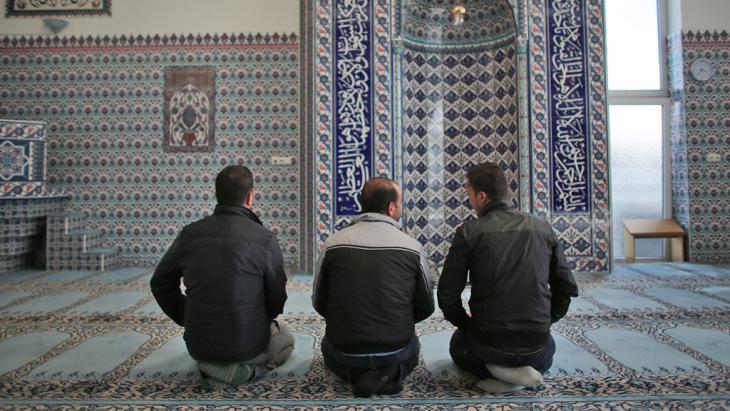 Refuge and help for the "newcomers": the umbrella organisations, the Turkish-Islamic Union (Ditib) and the Central Committee of Muslims (ZMD), report that there is a great willingness on the part of long-established Muslims to help refugees from Syria, Iraq and other Islamic countries

Araychi is of the opinion that an awful lot of complaining is going on in Germany. "We all have to be prepared to forego a little bit in order to help people in need." This country is economically strong and there is enough work and prosperity here, he believes.

Anxiety over economic difficulties and an uncertain economic future is something rarely expressed by Muslims, regardless of gender, age, academic status, job, or profession. It must be said, however, that many fear a growth in Islamophobia. Many Muslim women who wear a headscarf claim that they have experienced more scepticism and aggression over the past few months. A large number also fear that the newcomers, estimated to be around 80 percent Muslims, could damage the reputation of the Muslim community as a whole.

There is, however, no measurable data on whether these people are truly religious. Experts suspect that many of those who fled their homeland because of Islamic terrorism have an ambivalent relationship to Islam and are not particularly devout.

"We have gone to great lengths over the years to achieve recognition," explains Ayse Erogul. The 28-year-old female student now fears "a worsening of integration for Muslims at the societal and political levels, because the newcomers are not familiar with cultural practices and traditions in Germany and are behaving badly."

Selma Ozturk-Pinar does not share such views. Born in Hanover, she is the daughter of Turkish guest workers. "We already had problems with recognition before," says the 38-year-old lawyer. It is absurd to spread the fear among "long-established" migrants and Muslims that the newcomers will trigger an increase in marginalisation, says Ozturk-Pinar, who wears a headscarf and clearly identifies herself as a Muslim. 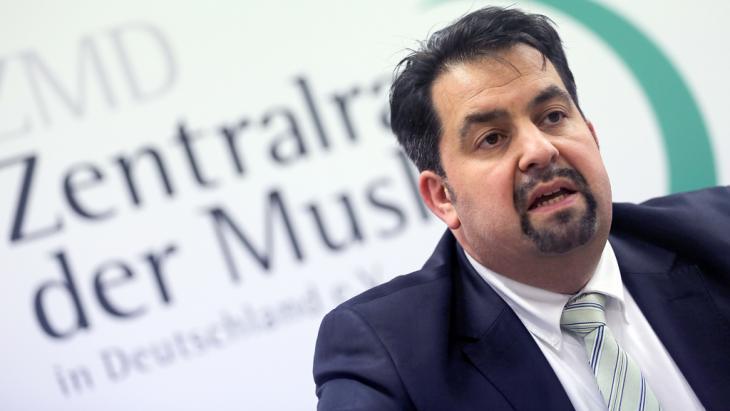 Active assistance: according to Aiman Mazyek, chairman of the Central Committee of Muslims in Germany, mosque associations are helping many of those who have fled civil war. They provide help with imams, donate prayer mats, copies of the Koran, halal food, as well as supporting those seeking refuge in their dealings with officials, the search for accommodation and finding a job. The claim heard in some quarters that Muslims have been passive is simply false. There are hundreds of aid projects across Germany

Ozturk-Pinar calls for greater empathy with the refugees. These people have been traumatised: In most cases they have arrived powerless in a completely foreign land, having suffered the loss of their homeland and the people close to them. They need help upon their arrival in Germany. In comparison with her parent's generation, however, the newcomers have a big advantage. Their integration into German society can work out better and faster, because there is "already an infrastructure here." This includes mosque communities and the many migrant self-help organisations that address the concerns of Muslims, says Ozturk-Pinar.

Others place their trust in the German political system and institutional support networks. The refugees are "well provided for and in good hands here," says Mersudin Cehadarevic. The 42-year-old arrived in Germany in 1989 from Bosnia as part of a family reunification programme. Since then, he has had a family of his own, runs a car dealership and engages in volunteer work as the chairman of a mosque association in Frankfurt. Initially, there was a lot of discussion in the community about the refugees, reports Cehadarevic. "We even donated money." The refugee situation is no longer the "number one" issue in the mosque.

Even though he is not actively engaged in helping refugees, Cehadarevic is very preoccupied with the issue. He is particularly concerned about those in the war zones that are subject to bombings and fear for their lives. Although he is a Muslim, he does not have an overview of the wars going on in countries and regions where Muslims live, says Cehadarevic.

Why "Sunnis and Shias, Turks and Kurds go around smashing in each others' heads" and why "idiots with shrivelled brains" murder people, while claiming to be Muslims remains a mystery to Cehadarevic. The father of four feels so overwhelmed by world events that he seeks calm and composure in prayer. One of these is an appeal to the Almighty: "Dear God, please help mankind to come to its senses so that we can live together in peace."

The Human Rights Film Festival Berlin has been held for the third time in 2020 under the patronage of Nadia Murad. In just a short time, this festival, which was initiated by the ... END_OF_DOCUMENT_TOKEN_TO_BE_REPLACED

The small East African nation of Djibouti has so far evaded musical discovery by the West. Now, however, the country's official national band, Groupe RTD, is picking up ... END_OF_DOCUMENT_TOKEN_TO_BE_REPLACED

Germany is home to 21 million people with a migrant background. Hospices and providers of palliative care are adapting their practices to make them more inclusive. By Christoph ... END_OF_DOCUMENT_TOKEN_TO_BE_REPLACED

Iranian director Manijeh Hekmat expected the production of her latest movie to go ahead as planned – but then she found herself having to improvise. The resulting film is more ... END_OF_DOCUMENT_TOKEN_TO_BE_REPLACED

Comments for this article: Integrating a new generation

"Their integration into German society can work out better and faster, because there is "already an infrastructure here." This includes mosque communities and the many migrant self-help organisations that address the concerns of Muslims, says Ozturk-Pinar."

Yes, this will happen, just not the integration part. The ghettos and parallel societies will grow. Foreigners will stay among foreigners. No need to integrate into German culture and have contacts with Germans, when you can surround yourself solely with other migrants. It is just so much easier to use their "infrastructure". No need to learn German, like many imported brides living in Germany for decades can show them.

END_OF_DOCUMENT_TOKEN_TO_BE_REPLACED
Social media
and networks
Subscribe to our
newsletter