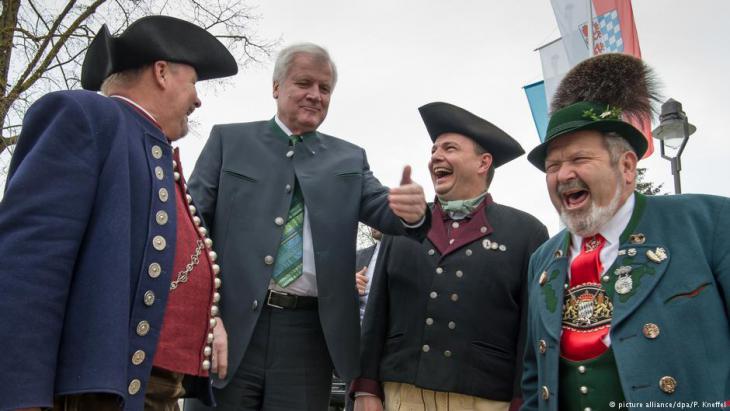 By stating that Islam is not part of Germany, newly appointed Homeland Minister Horst Seehofer is not only polarising the population. At the same time, he is cementing the fundamentally unequal treatment of religious communities in Germany. Commentary by Farid Hafez

It's a sentiment with a long history, a sentiment repeated by many newspapers and politicians in recent days. And by uttering it, the new Interior Minister Horst Seehofer (CSU) has certainly caused a furore yet again. But in actual fact, the statement "Islam IS part of Germany" was first uttered in 2006 – and it continues to divide Germany's political sphere to this day.

With the formation of the new super-Ministry for the Interior, Construction and Heimat (Homeland), Seehofer – who was, from 2008 until recently, State Premier of the Free State of Bavaria – was able to clarify what he understands the concept of "Heimat" to be. The ministry, crowned with this term for the first time, may call to mind the Department for Homeland Security set up in the U.S. after 9/11. Or Austria, Germany's neighbour to the south, where since the right-wing coalition came to power, the former secretary general of the right-wing populist FPO was almost appointed to lead an interior and homeland protection ministry.

The move was only prevented thanks to widespread public criticism, because the term revived loaded historical associations ("Heimatschutz" – or "homeland protection" – was perceived as a synonym for "Heimwehr" or "home defence", a civilian paramilitary organisation from the inter-war period, which came to power during the Austrofascist era). And in any case, neither term can be said to constitute a glorious point of reference. Nevertheless, Seehofer was able to invoke the case of his own Free State of Bavaria, where there has been a homeland protection ministry since 2013!

The arguments deployed against Seehofer were extensive. They ranged from pointing out the historic inaccuracy of the statement, through to sociological arguments why the utterance "Islam is not part of Germany" did not correspond to reality. And without doubt, all these arguments are also correct. But they do not really address the nub of the issue. After all, this is not about arguments, but a perspective on the German nation that can be traced back to a concept of nationhood based on ethnicity, one that conveys the superiority of several "truly German groups" over a minority. 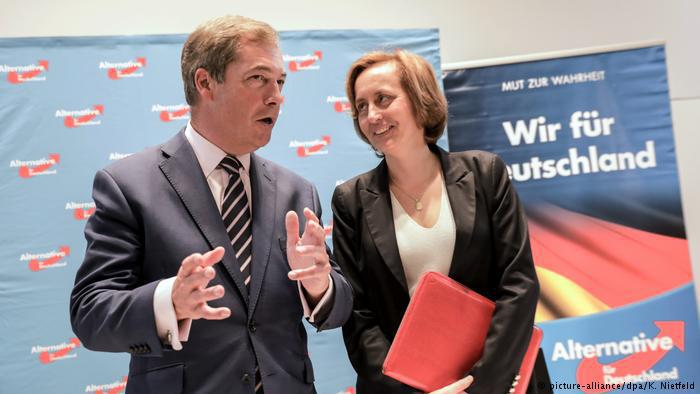 Grist to the populistsʹ mill: with his stance, Seehofer is indicating his own party's readiness to tap new seams of voters to the right of conservative. Yet ultimately it must be clear that perpetually transgressing boundaries and thereby stretching the limits of what can actually be said, always plays into the hands of right-wing populist parties. After all, the AfD will have no problem topping any of these statements with several inflammatory utterances of its own. As a result, it will be hard to restrain the AfD in its open racism

To his rejection of the symbolic inclusion of a religious community, Seehofer added what DID belong to Germany: "What belongs are Sundays as a day of rest, church holidays and rituals such as Easter, Whitsun and Christmas."

Some religions are simply more equal …

And it is precisely this view of a structurally privileged status for the Christian tradition that delineates the division of the population: Muslims are not regarded as equal before the law and the possibility that this could change – that Muslim faith communities might one day enjoy the same legal status as Christian communities – is not even up for discussion.

Seehofer also announced his wish to reconvene the Islam Conference, described by many critics as an asymmetrical power constellation – a situation that is hardly likely to improve the legal status of Muslims.

This legal dimension conveys the essential problem: Seehofer does not regard Muslims as equal. After all, their religion is not to be considered equal, which is why as far as the "Heimat" minister is concerned, no equal legal treatment with regard to religious-political practices is necessary. This constitutes the essence of racism based on the de-humanisation of a particular group, in order to legitimise the different, special treatment of this group.

In legal terms, this racism is reflected in the discrimination. Instead of demonstratively representing the concept of "Heimat" in the sense of inclusion and making the legal equality of Muslims a declared goal of his policies, Seehofer insists on reinforcing the existing supremacy of the Christian churches thus affirming this discrimination.

One could argue that this discursive positioning ultimately results in an erosion of democratic ideals. But also, that it represents efforts to attain a concept of democracy similar to that outlined by Carl Schmitt, which invokes the equality of equals or, in other words, means that unequals will not be treated equally. 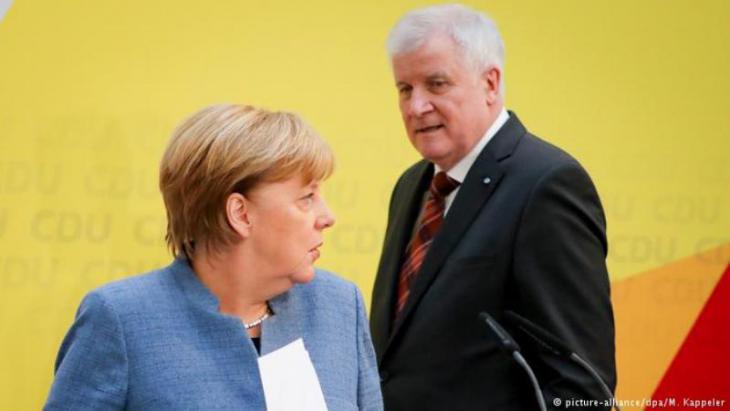 Seehoferʹs position vehemently rejected by Merkel: the Chancellor said that while Germany was shaped by its Judeo-Christian heritage, "there are 4 million Muslims living in Germany." "They can live their religion here, too," said Merkel. "These Muslims belong to Germany and in the same way their religion belongs to Germany, that is to say Islam"

Seehofer's statement made it all the more important for other politicians in the grand coalition, first and foremost Chancellor Angela Merkel, to issue an unequivocal response. But the question that still resonates is: will Merkel's argumentation also lead to concrete measures? When considering Merkel-era developments in religion-related policymaking, to date there have been no breakthroughs with regard to an improvement of provisions affecting the religious rights of Muslims – even if these are primarily the responsibility of the individual federal states.

But despite some progress at a state-level, there exists a fundamental asymmetry that consists of conceding gradual privileges, without however touching upon the fundamental question of placing Muslim communities on an equal footing with church congregations. Yet doing this would actively demonstrate the democratic ideal in the field of religious law.

Going for the AfD vote

With his stance, Seehofer is indicating his own party's readiness to tap new seams of voters to the right of conservative. But it is also a nod in the direction of the extreme right. Austria offers a prime example of how such a strategy of attempting to co-opt right-wing positions rarely ends well.

Ultimately it must be clear that perpetually transgressing boundaries and thereby stretching the limits of what can actually be said, always plays into the hands of right-wing populist parties. After all, the AfD will have no problem topping any of these statements with several inflammatory utterances of its own. As a result, it will be hard to restrain the AfD in its open racism.

With this in mind, the government – and in particular the CDU and CSU – must ask itself what part it is playing in the creation of a Germany that strives for equality, yet also cements inequality and legitimises this in the public discourse.

Home
Print
Newsletter
More on this topic
Merkel hits back at minister who denied Islam's place in GermanyAustria's new programme for government: En route to a restrictive policy on Islam?The Islam debate The dual consciousness of Muslims
Related Topics
AfD | Alternative for Germany, Dialogue of Religions, Islam in Germany, Muslims in the West, Right-wing populism, Rule of law
All Topics

Her grandparents are Jews – born in Tunisia and Algeria. Director Cleo Cohen has now broken the silence about this with a very personal debut. By Nadine Wojcik END_OF_DOCUMENT_TOKEN_TO_BE_REPLACED

Life imprisonment for crimes against humanity: that was the sentence handed down to Anwar Raslan in the world's first trial of a member of the Syrian torture system. Matthias von ... END_OF_DOCUMENT_TOKEN_TO_BE_REPLACED

Every year in December, the team at Qantara.de takes a look back at the articles that proved most popular with our readers. This year is no different. Here is a run-down of the ... END_OF_DOCUMENT_TOKEN_TO_BE_REPLACED

With his new album, "A Voice Keeps Calling Me", the Persian santur player Kioomars Musayyebi is building bridges from Iran across the Arab world to European early music. By Stefan ... END_OF_DOCUMENT_TOKEN_TO_BE_REPLACED

Former lawyer Said Haider has invented a chatbot for those seeking advice on anti-discrimination issues – Meta is the first chatbot of its kind in the world. In conversation with ... END_OF_DOCUMENT_TOKEN_TO_BE_REPLACED

Benjamin Idriz, imam of the mosque in Penzberg near Munich, is one of the most prominent representatives of Islam in Germany. He sees his role as building bridges to mainstream ... END_OF_DOCUMENT_TOKEN_TO_BE_REPLACED
Author:
Farid Hafez
Date:
Mail:
Send via mail

END_OF_DOCUMENT_TOKEN_TO_BE_REPLACED
Social media
and networks
Subscribe to our
newsletter