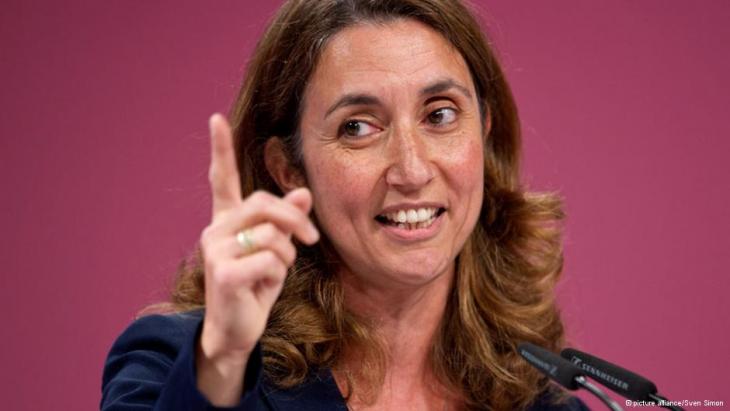 Germany's New Minister for Migration
Aydan Özoguz, a Turkish-German at the Top

The SPD's Aydan Özoguz is the first politician of Turkish origin to hold a top post in Germany. As integration minister, she gives a voice to the country's many migrants - but she has not been without controversy. By Michael Hartlep

The interview requests are piling up on her desk, but Aydan Özoguz wants to wait. She only wants to talk to the media after her official swearing-in as Minister for Migration, Refugees and Integration on Tuesday. It will be a first for Germany, because with Özoguz a woman of Turkish origin and a Muslim will have taken a seat at the top level of government for the first time.

SPD chairman Sigmar Gabriel said he was "extremely" pleased with the decision, announced on December 15 at party headquarters in Berlin. He called her appointment a clear signal to the estimated 16 million people in Germany who are immigrants or the children of immigrants.

The 46-year-old can look back on a remarkable career. Her parents were Turkish guest workers in Hamburg. After high school, Özoguz studied English, Spanish and business administration, and became a German citizen in 1989. She began her political career in 2001 as a member of the Hamburg government. Throughout her career, she made an issue of integrating Germany's large Turkish community into German society – and continued to do so when she was elected to parliament in 2009 and 2011, rising to become deputy party chair. 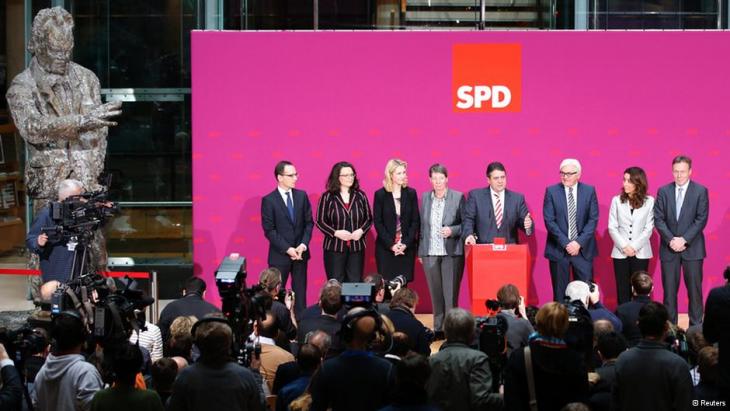 With Özoguz a woman of Turkish origin and a Muslim will have taken a seat at the top level of government for the first time. Pictured: SPD leader Sigmar Gabriel presented Özoguz at the party's Willy-Brandt-Haus in Berlin

Her appointment as Minister for Migration, Refugees and Integration in the grand coalition of the center-right CDU and the center-left SPD still came as something of a surprise. For the last few years, the post had been in the hands of the CDU's Maria Böhmer. Again and again Özoguz had sharply criticized her predecessor, saying she was too hesitant and uncommitted to the integration policy. Özoguz now wants to "set a new course".

The Turkish Community in Germany welcomed the "historic" decision to appoint a woman of Turkish origin. Chairman Kenan Kolat told Deutsche Welle that while Özoguz was well-versed in integration matters, there was a danger she might have to distance herself from her Turkish origins. Kolat therefore called for other ministries to be awarded to people with a migration background.

The refugee-rights organization Pro Asyl called the decision "wise". Chairman Günter Burkhardt said it was good the ministry would be run by a Social Democrat, as a counterweight to the CDU-led Interior Ministry. He expressed the hope that Özoguz would allow more refugees into Germany than her predecessor had, and would grant them more rights in a stronger legal framework. 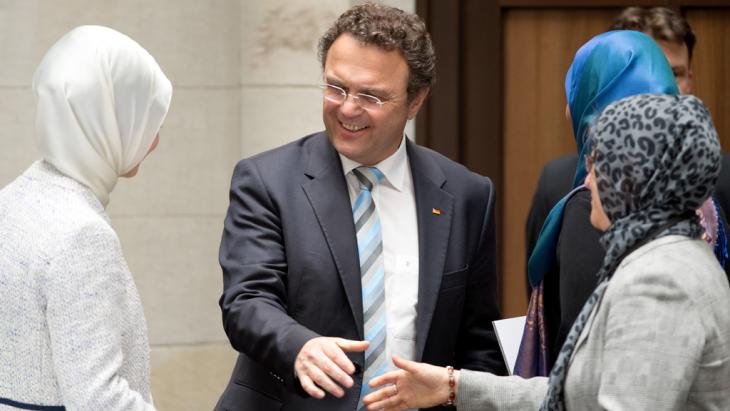 Not afraid to take a stand: In 2011, Aydan Özoguz led calls for Muslims to boycott the government-sponsored Islam conference meant to combat extremism, because she believed chairman and then Minister of the Interior Hans-Peter Friedrich only wanted to use it to boost his image as a tough, no-nonsense politician

But the new minister is not without her controversies. Two of her brothers run an Islamist website with close ties to the Iranian government. Germany's domestic intelligence agency, the Office for the Protection of the Constitution, has kept the site under observation for the past decade, thanks to its virulently anti-Israeli, anti-American and anti-democratic positions and the Özoguz brothers' association with Holocaust deniers and other extremists. Aydan Özoguz has distanced herself from her brothers' activities.

In 2011, she led calls for Muslims to boycott a government-sponsored Islam conference meant to combat extremism, because she believed chairman Hans-Peter Friedrich only wanted to use it to boost his image as a tough, no-nonsense politician. Özoguz therefore demanded the removal of the federal interior minister as the conference's chairman. The move was met with opposition from the head of the largest Turkish Muslim organization in Germany.

How much Aydan Özoguz will actually be able to change in her position is questionable. The Office of the Minister for Migration, Refugees and Integration is subordinate to the chancellery and does not have an infrastructure of its own. The relevant specialized departments and units belong to the Labor and Interior ministries and others. But as the government's person to turn to on integration, Özoguz will be able to give a voice to the issue.

Giessen, Eichsfeld, Kusel, Berlin – cars bearing old German number plates are the latest trend on the streets of Cairo. Many Egyptians regard the discarded plates as chic. What ... END_OF_DOCUMENT_TOKEN_TO_BE_REPLACED

Tunisia has been going through a severe economic and political crisis in recent years. More than one in three young people there are unemployed. For many skilled, qualified and ... END_OF_DOCUMENT_TOKEN_TO_BE_REPLACED

German imams have publicly expressed their solidarity with the women of Afghanistan. In a letter of protest, the clerics say that the Taliban regime's decree barring women from ... END_OF_DOCUMENT_TOKEN_TO_BE_REPLACED

At the end of every year, the team at Qantara.de gives you a run-down of the ten most-read articles on the site over the past 12 months. Here is a quick overview of the stories ... END_OF_DOCUMENT_TOKEN_TO_BE_REPLACED

Social engagement is often motivated by religious factors. A new book explores the background to these community efforts and appraises how effective they are in helping to ... END_OF_DOCUMENT_TOKEN_TO_BE_REPLACED

Comments for this article: Aydan Özoguz, a Turkish-German at the Top

You Muslims sure love tolerance and immigration...in other's people's countries. Your own you want them Nationalist-Islamic and no tolerance whatsoever.

The Jews love that attitude too...

END_OF_DOCUMENT_TOKEN_TO_BE_REPLACED
Social media
and networks
Subscribe to our
newsletter