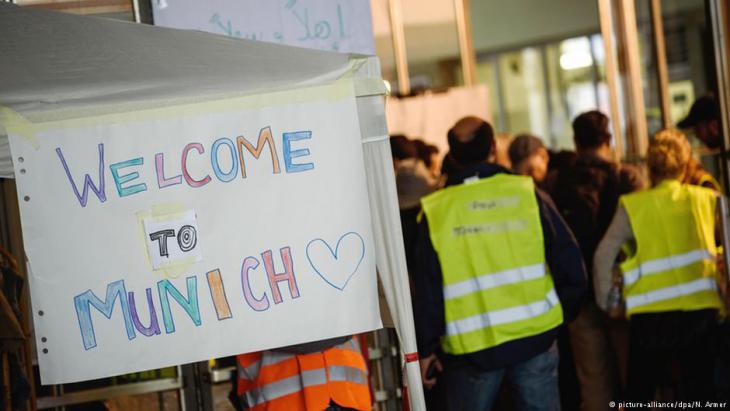 Germany's refugee influx two years on
Where there's a will

In 2015 and 2016, some 1.2 million refugees fled to Germany. Two years on from the start of the refugee crisis, how are these new arrivals integrating? Have the right steps been taken? Report by Claudia Mende

Rayan Malhis sits on the long sofa in the living room, beaming. She is 16 years old, slender, wearing a headscarf and braces on her teeth. They have passed the middle-school entrance exam, all three of them: Rayan, her twin sister Rasan, and Raneem, who is a year younger. Now the door has been opened for them to finish secondary school.

The war in their homeland, Syria, has already robbed them of too much time. They spent two years unable to go to school in Aleppo. Now, all three girls have ambitious plans. First their middle school leaving certificate, then high school. They want to go to university and become a pharmacist, an architect and a biologist respectively, they tell me in flawless German.

They, their mother Husna and their younger brother Mohammed Besher (6) came to Germany in October 2015. Their father, Annas Malhis, had already taken refuge in the safety of Germany the year before, crossing the sea from Turkey, passing through Greece and taking the Balkan route. He was able to spare his family from having to live in communal accommodation. When they arrived, an Arab family who had lived in Munich for a long time took all six of them in until the formalities had been taken care of. Then aid volunteers helped them look for a flat.

The family now lives on a new-build estate in the north of Munich and they are doing their best to settle into their new life. The girls are fast learners, determined and motivated.

When the Malhis family first came to Munich in autumn 2015, hundreds of thousands of people were seeking refuge in Germany. Around 1.2 million people arrived during the course of 2015 and 2016. Although not all of them want to stay long term, their integration has become a perennial topic of debate in the country. Of course, whether or not integration has been successful is something we will only be able to judge a couple of decades down the track.

But two years after Angela Merkel′s open-door policy, there are a few signs to indicate whether the right steps have been taken. How do things stand, for instance, with living arrangements, language courses and entering the job market?

A shortage of flats in built-up areas

Most of the refugees have now been able to leave their collective accommodation and look for a flat. But there is no reliable data on their living arrangements. The Malhis family were lucky enough to find something suitable quickly. But the tense situation with accommodation in built-up areas will be a central issue over the coming years.

In the face of skyrocketing rents, people on low incomes risk being pushed out to the edges of cities. Job applicants with foreign-sounding names are having a particularly hard time finding work, as an investigation by BR Data and Spiegel Online has revealed. Men with Turkish or Arab-sounding names are frequently rejected in the first round. This is a problem in the long term, particularly if we want to avoid the creation of deprived areas.

All members of the Malhis family were quickly given places on language courses – except little Mohammed, who currently attends kindergarten. There has been clear progress in language and integration courses, as entry requirements have been relaxed and provision has been ramped up.

Her grandparents are Jews – born in Tunisia and Algeria. Director Cleo Cohen has now broken the silence about this with a very personal debut. By Nadine Wojcik END_OF_DOCUMENT_TOKEN_TO_BE_REPLACED

Life imprisonment for crimes against humanity: that was the sentence handed down to Anwar Raslan in the world's first trial of a member of the Syrian torture system. Matthias von ... END_OF_DOCUMENT_TOKEN_TO_BE_REPLACED

Every year in December, the team at Qantara.de takes a look back at the articles that proved most popular with our readers. This year is no different. Here is a run-down of the ... END_OF_DOCUMENT_TOKEN_TO_BE_REPLACED

With his new album, "A Voice Keeps Calling Me", the Persian santur player Kioomars Musayyebi is building bridges from Iran across the Arab world to European early music. By Stefan ... END_OF_DOCUMENT_TOKEN_TO_BE_REPLACED

Former lawyer Said Haider has invented a chatbot for those seeking advice on anti-discrimination issues – Meta is the first chatbot of its kind in the world. In conversation with ... END_OF_DOCUMENT_TOKEN_TO_BE_REPLACED

Benjamin Idriz, imam of the mosque in Penzberg near Munich, is one of the most prominent representatives of Islam in Germany. He sees his role as building bridges to mainstream ... END_OF_DOCUMENT_TOKEN_TO_BE_REPLACED
Author:
Claudia Mende
Date:
Mail:
Send via mail

END_OF_DOCUMENT_TOKEN_TO_BE_REPLACED
Social media
and networks
Subscribe to our
newsletter