In the Shadow of the Boycott

A number of Turkish associations have boycotted Germany's integration summit and want to take the issue of Germany's tightened immigration laws to the Federal Constitutional Court. German politicians, meanwhile, have dismissed the boycott as a complete overreaction. Peter Philipp reports 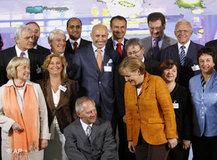 ​​It could have gone so well. The plan was to use the second integration summit organised by Germany's chancellor, Angela Merkel, to launch a 'national integration plan' containing hundreds of measures aimed at integrating immigrants.

The result was, however, overshadowed by the decision of a variety of Turkish associations to stay at home. For several days now, it has been painfully clear that the atmosphere at the second summit would not be as good as it was at the first.

Criticism of a "discriminatory immigration law"

The associations are angry that they were not consulted by the Federal Government about the tightening of Germany’s immigration law. They claim that without actually being specifically named, the law is particularly discriminatory to Turkish migrants, not only because Turkish citizens account for the largest number of so-called "migrants" in Germany, but also because the new law requires spouses from foreign countries to learn German before coming to Germany. Moreover, they must be at least 18 years of age.

The angry Turkish associations have triggered a debate that highlights the dreadful state of immigration in Germany.

Politicians are dismissing claims by some association representatives that this is a human rights abuse as "nonsense". For their part, the politicians claim that the purpose of these requirements is to prevent forced marriages and say that it is perfectly natural to expect anyone who wants to live in Germany to speak German.

Blocking what is self-evident?

What they are forgetting is that it is not as easy to learn German in an Anatolian village as it is in somewhere like New York or Tokyo, where such conditions are not even applied. They also forget that the best place to learn German is in Germany.

The Turkish associations are creating the somewhat unfortunate impression of wanting to put pressure on the Federal Government. For their part, German politicians are playing the matter down and accusing the Turkish associations of wanting to block something that is self-evident, i.e. the importance of integrating immigrants into society and the necessity of their learning German. But next to no-one is calling this "self evident" principle into question.

If, however, Turkish citizens have to learn German in Anatolia – and even if the German in question amounts to no more than "three hundred words" as the politicians are suddenly claiming by way of appeasement – then this will create an obstacle for both the people in Turkey and to Turkish citizens living in Germany and looking for a Turkish spouse back home.

Although talk of wanting to prevent "forced marriages" might sound good, the fact of the matter is that this goal cannot be reached by raising the minimum age of immigration to 18 and certainly not by asking immigrants to learn three hundred German words before they arrive. Problems such as this must be solved in Germany.

Not only that, but they must be solved around the negotiating table at which immigrants are treated as equal partners – "at eye level" as the politicians are so fond of saying. This is exactly what should have happened with the amendment of the immigration law. It would have saved a lot of trouble and things could have gone a whole lot better if it had.

Translation from the German by Aingeal Flanagan

Integration and Immigration Policy in Germany
Immigration Law as "Integration Prevention Law"
In his commentary, the chairman of the German Federal Advisory Council for Foreign Residents, Memet Kiliç, criticizes the tightening of immigration law in Germany. Instead of promoting integration, the "old defensive spirit" of the law on aliens is creeping into immigration law, says Kiliç

Baden-Württemberg's Conscience Test
Zeitgeist of Fear and Prejudice
The conscience test, conceived by the interior ministry in the German state of Baden-Württemberg to check whether potential German citizens have the right moral convictions, reflects current German attitude towards Muslims, says Ülger Polat