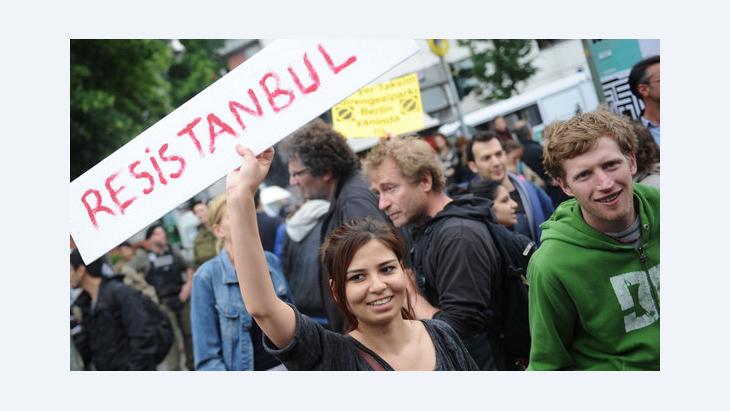 ﻿Germany's Turkish community is keeping a close eye on events in Istanbul. Many hope the young people in Taksim Square will prevail. Others are saying nothing. By Naomi Conrad

﻿Three older women are sitting on plastic chairs in the shadow of the Berlin Mosque. What do they think about the demonstrations in Turkey and Gezi Park? They ask for the question to be repeated in Turkish. Someone helps translate, and one of the women nods so enthusiastically that she has to readjust her headscarf. "Istanbul, super!" she says.

But then, one of the women beside her shakes her head and a passionate discussion ensues. The word "demokrasi" is used. "They say it'll get better soon," the translator summarises.

What do they mean by "better", though? Do they support the demonstrators, who have been protesting on the streets of Istanbul for almost three weeks now? The majority are young people who want to live their lives as they please, without interference from the conservative government of Prime Minister Recep Tayyip Erdogan. Or would these women prefer Erdogan to restore order, if necessary by force?

The young translator shrugs. She's wearing a loose headscarf, but underneath it she's sporting a low-cut top. She can understand why young Turkish people are protesting, not just in Istanbul, but also in Ankara and other cities. It's to do with religion, she says. "The government wants to dictate to them what they can and can't do," she explains: by restricting the sale of alcohol, for example, or banning kissing in public places or with its strict policy on abortion. 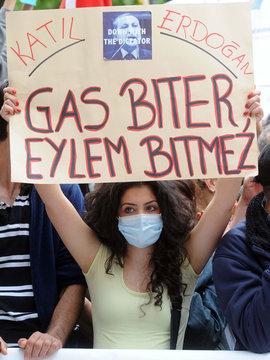 A woman in Cologne holds up a poster protesting against the brutal crackdown on demonstrators in Turkey. The demonstration was organised by the Alevi community in Germany

​​In any case, she adds, no one in the mosque would admit to supporting Erdogan. They would only do that on Facebook: "That's where a lot of people show their true colours." The governors of the mosque don't want to offer an official position, either.

There are more than 100,000 Turks living in Berlin, but it's hard to tell who among them supports Erdogan. Critics, on the other hand, are more open. "I admire these young people," says Gülcin Wilhelm. She says that they've repeatedly been provoked. Wilhelm, an author who moved to Germany from Istanbul as a student 36 years ago, reels off a list of instances: attacks with tear gas and water cannons, arrests and the brutal clearing of Gezi Park, where the demonstrators had set up a tent city. "Amazing that they're still not throwing stones!" She shakes her head and sips her glass of tea.

Gülcin is sitting in the Confiserie Orientale in the trendy district of Berlin Mitte, with Turkish music playing in the background and black-and-white photos of "old" Istanbul hanging on the walls. This is the Istanbul of Gülcin's childhood,  not the "new" Istanbul under Erdogan, a city increasingly full of brand new buildings and construction sites as the new middle class seeks to flaunt its wealth; a place where religion and conservative values play an increasingly important role.

"It's not my city any more," says Gülcin. She still goes to Turkey for weddings and other family celebrations, and was there again in April. She says she could have kissed the ground when she got back to Berlin. She laughs at the memory.

But now, Gülcin is considering going back to Istanbul ﻿﻿– because of the protests. "For the first time, I feel connected to Istanbul again; that I like the place." The young people give her hope, she says, that the liberal Istanbul of her memories still exists. If the young people's demands for more democracy, even new elections, should succeed, she believes it would be an important step forward for Turkey. 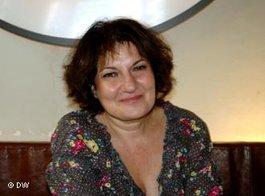 Gülcin Wilhelm, a journalist and writer with Turkish roots, says that the young demonstrators in Istanbul give her hope that the liberal city of her youth has not died

​​But Gülcin does worry that the situation could escalate. A few days ago, Erdogan threatened to bring the army in to deal with the protesters.

Ismael also thinks this might happen. "Erdogan is showing everyone his true colours now," he says, "as he has always done to the Kurds." He's referring to years of government oppression of Turkey's Kurdish minority.

Ismael, who prefers not to give his last name, works for a Kurdish cultural centre in Berlin. Beside him, a man is leafing through a Turkish newspaper. He says he used to be a "militia", a member of the Kurdish guerrilla organisation PKK, which declared war on the Turkish state in the early 1980s. He's been living in Berlin for four years now. Earlier this year, Erdogan and the PKK agreed to a ceasefire, and a few weeks ago the PKK fighters withdrew to the Kurdish region of northern Iraq.

Ismael is not convinced that Erdogan will stick to the agreement. Many Kurds have joined the demonstrators in Istanbul. If the army really does intervene, Ismael warns that "the Kurds will rebel", but that's all he's prepared to say.

Social worker Ece Yildrim, on the other hand, doesn't believe things will escalate. She and her friends are organising events in Berlin to show solidarity with the protesters in Turkey: demonstrations, talks at universities, a protest in a tent in Berlin, anything to make clear that what's happening there is unacceptable. Ece heard about the demonstrations on Facebook, and started a solidarity committee that same day.

She admits, though, that the Gezi Park unrest is a divisive issue for Berlin's Turkish community. Not everyone appreciates her involvement. The woman who cleans her office told Ece that she disapproved of her work. "She told me, 'It damages our country's reputation!'" Ece sighs.

She still believes, however, that it's important to show solidarity with the protests here in Germany. "The German government has always assumed that Turkey is a democratic country," she says. It's an assumption she views as ridiculous. But Germany is an important trading partner for Turkey, which means the German government is in a position to put pressure on Ankara ﻿ ﻿– and that's what Ece is hoping will happen.

The Turkish government is hoping to split the opposition and put off voters by cracking down on pro-Kurdish politicians. But critics say the strategy won't work this time. By ... END_OF_DOCUMENT_TOKEN_TO_BE_REPLACED

Recently, Twitter has become something of a people's court for Turks seeking justice. Particularly in cases of violence against women and animal rights, social media is regarded ... END_OF_DOCUMENT_TOKEN_TO_BE_REPLACED

Now that he has converted Hagia Sophia back into a mosque, Turkey's president, Recep Tayyip Erdoğan is setting his sights on the Al-Aqsa Mosque in Jerusalem. Joseph Croitoru ... END_OF_DOCUMENT_TOKEN_TO_BE_REPLACED

Ronya Othmann's novel "Die Sommer" (The Summers) tells the story of Leyla – the daughter of a German and a Yazidi Kurd – who visits her grandparents' Yazidi village in northern ... END_OF_DOCUMENT_TOKEN_TO_BE_REPLACED

In the aftermath of the devastating explosions in Beirut, French President Emmanuel Macron is styling himself as Lebanon's saviour. Ultimately, however, the success of his efforts ... END_OF_DOCUMENT_TOKEN_TO_BE_REPLACED

Lacking support from Arab countries for its stance on the Kashmir dispute, Pakistan is looking for new alliances under China's leadership. How practical is it for Islamabad to ... END_OF_DOCUMENT_TOKEN_TO_BE_REPLACED
Author:
﻿Naomi Conrad
Date:
Mail:
Send via mail

END_OF_DOCUMENT_TOKEN_TO_BE_REPLACED
Social media
and networks
Subscribe to our
newsletter