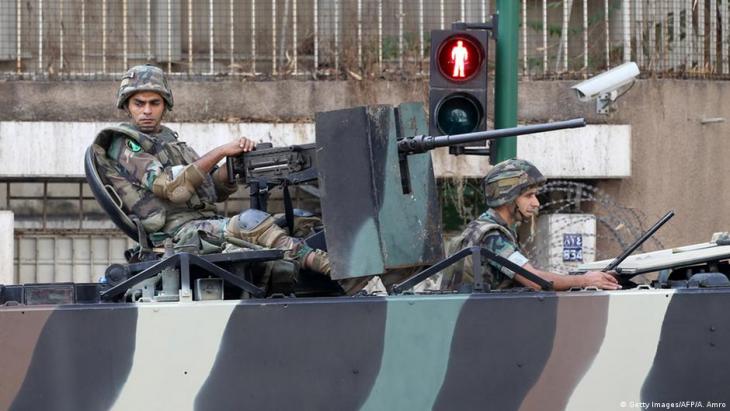 World powers promised on Thursday to support Lebanon's army to prevent its collapse amid the deepest political and economic crisis since the Middle East nation's 1975-1990 civil war, but they did not announce any tangible aid.

The army has long been seen as one of the few institutions in Lebanon that can rally national pride and create unity. Its split along sectarian lines at the start of Lebanon's civil war helped fuel a descent into militia rule.

Lebanese Army Chief Joseph Aoun told Thursday's meeting of world powers, which was organised by France, that the nation faced dire consequences if the country's crisis persisted and military salaries continued to tumble.

"How can a soldier support a family with a salary that does not exceed $90?" he said in a video, published on the army's Twitter account. "If unmitigated, the economic and financial crisis will inevitably lead to the collapse of all state institutions including the Lebanese Armed Forces, the backbone of the country."

France, which has led international efforts to help Lebanon, arranged the virtual meeting with partners including the United States, Russia, China and European powers and some Gulf Arab states, although not Saudi Arabia.

Participating countries were asked to provide food, medical supplies, spare parts for military equipment and even fuel, although they were not asked to pay salaries directly.

Two diplomats said not much was offered during the meeting, although the majority of countries showed readiness to offer bilateral support in the future. They said a follow-up mechanism would monitor and coordinate any aid.

Paris has sought to ramp up pressure on squabbling Lebanese politicians but has so far failed to push them to form a new government that is vital to unlock foreign aid.

Discontent has been brewing in the security forces as Lebanon's currency has lost 90% of its value against the dollar, driving down soldiers' wages. Many have taken extra jobs. Some have quit.

According to the ministry statement, the participants said the army "remains a crucial pillar of the Lebanese state," adding: "Their cohesiveness and professionalism remain key to preserving the country’s stability from more risks."

The ministry did not respond to a request for further information.    (AFP)

More on this topic
Lebanon’s crisis threatens one of its few unifiers, the armyEconomic crisis in Lebanon: The subsidy quandaryLebanese author Elias Khoury in interview: Beirut's ruling class – "The stupidest mafia there is"The Lebanon crisis: A land in freefall – between revolution and hope
Home
Print
Newsletter
MoreAll Topics

END_OF_DOCUMENT_TOKEN_TO_BE_REPLACED
Social media
and networks
Subscribe to our
newsletter