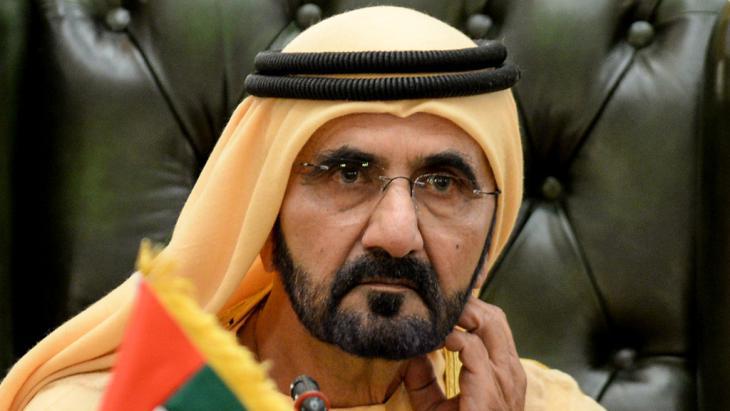 Global strategies for combating Islamic State
The intellectual battle against IS

The global financial crisis taught the world how profoundly interdependent our economies have become. In today's crisis of extremism, we must recognise that we are just as interdependent for our security, as is clear in the current struggle to defeat IS (also known as ISIS), writes Mohammed bin Rashid Al Maktoum

If we are to prevent ISIS from teaching us this lesson the hard way, we must acknowledge that we cannot extinguish the fires of fanaticism by force alone. The world must unite behind a holistic drive to discredit the ideology that gives extremists their power and to restore hope and dignity to those whom they would recruit.

ISIS certainly can – and will – be defeated militarily by the international coalition that is now assembling and which the UAE is actively supporting. But military containment is only a partial solution. Lasting peace requires three other ingredients: winning the battle of ideas; upgrading weak governance; and supporting grassroots human development.

Such a solution must begin with concerted international political will. Not a single politician in North America, Europe, Africa, or Asia can afford to ignore events in the Middle East. A globalised threat requires a globalised response. Everyone will feel the heat, because such flames know no borders; indeed, ISIS has recruited members of at least 80 nationalities.

ISIS is a barbaric and brutal organisation. It represents neither Islam nor humanity's most basic values. Nonetheless, it has emerged, spread and resisted those who oppose it. What we are fighting is not just a terrorist organisation, but the embodiment of a malicious ideology that must be defeated intellectually.

I consider this ideology to be the greatest danger that the world will face in the next decade. Its seeds are growing in Europe, the United States, Asia and elsewhere. With its twisted religious overtones, this pre-packaged franchise of hate is available for any terrorist group to adopt. It carries the power to mobilise thousands of desperate, vindictive or angry young people and use them to strike at the foundations of civilisation. 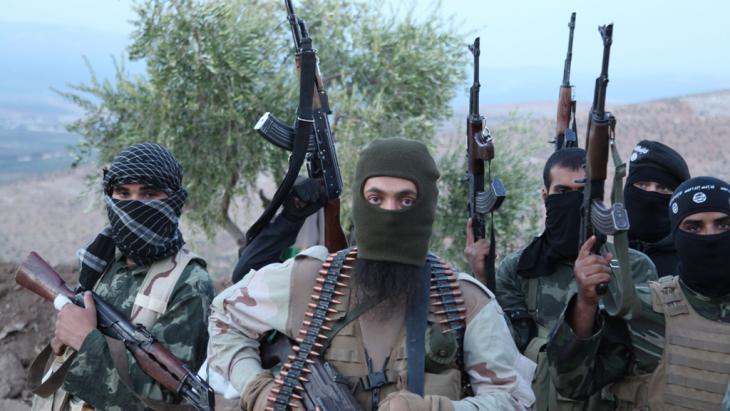 Armed to defend an ideology of hate: young IS fighters near Aleppo, Syria. "What most worries me is that a decade ago, such an ideology was all that al-Qaida needed to destabilise the world, even from a primitive base in the caves of Afghanistan. Today, under ISIS, adherents have access to technology, finance, a huge land base and an international jihadist network," writes Mohammed bin Rashid Al Maktoum

Ideology of rage and hate

The ideology fuelling ISIS has much in common with that of al-Qaida and its affiliates in Nigeria, Pakistan, Afghanistan, Somalia, Yemen, North Africa and the Arabian Peninsula. What most worries me is that a decade ago, such an ideology was all that al-Qaida needed to destabilise the world, even from a primitive base in the caves of Afghanistan. Today, under ISIS, adherents have access to technology, finance, a huge land base and an international jihadist network. Far from being defeated, their ideology of rage and hate has become stricter, more pernicious and more widespread.

The destruction of terrorist groups is not enough to bring lasting peace. We must also strike at the root to deprive their dangerous ideology of the power to rise again among people left vulnerable by an environment of hopelessness and desperation. And, on this note, let us be positive.

The solution has three components. The first is to counter malignant ideas with enlightened thinking, open minds and an attitude of tolerance and acceptance. This approach arises from our Islamic religion, which calls for peace, honours life, values dignity, promotes human development and directs us to do good to others.

Only one thing can stop a suicidal youth who is ready to die for ISIS: a stronger ideology that guides him onto the right path and convinces him that God created us to improve our world, not to destroy it. We can look to our neighbours in Saudi Arabia for their great successes in de-radicalising many young people through counselling centres and programmes. In this battle of minds, it is thinkers and scientists of spiritual and intellectual stature among Muslims who are best placed to lead the charge.

The second component is support for governments' efforts to create stable institutions that can deliver real services to their people. It should be clear to everyone that the rapid growth of ISIS was fuelled by the Syrian and Iraqi governments' failings: the former made war on its own people, and the latter promoted sectarian division. When governments fail to address instability, legitimate grievances and persistent serious challenges, they create an ideal environment for hateful ideologies to incubate – and for terrorist organisations to fill the vacuum of legitimacy. 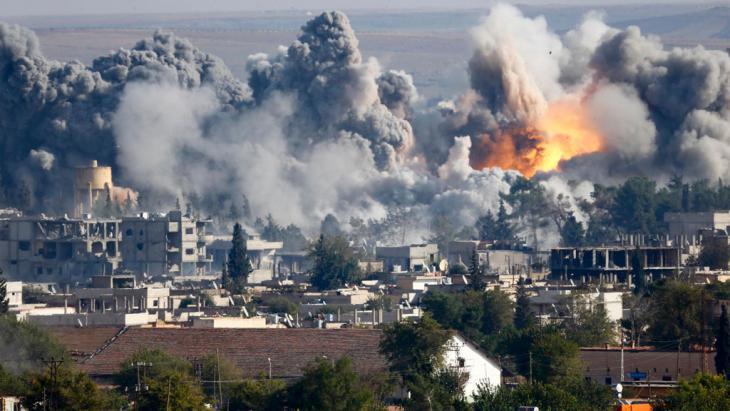 Military containment: US air strikes against IS fighters in Kobani. Mohammed bin Rashid Al Maktoum has no doubt that IS will be defeated militarily by the international coalition. However, he is also aware that such containment is only part of the solution: "Lasting peace requires three other ingredients: winning the battle of ideas; upgrading weak governance; and supporting grassroots human development"

The final component is to address urgently the black holes in human development that afflict many areas of the Middle East. This is not only an Arab responsibility, but also an international responsibility, because providing grassroots opportunity and a better quality of life for the people of this region is guaranteed to ameliorate our shared problems of instability and conflict. We have a critical need for long-term projects and initiatives to eliminate poverty, improve education and health, build infrastructure and create economic opportunities. Sustainable development is the most sustainable answer to terrorism.

Our region is home to more than 200 million young people. We have the opportunity to inspire them with hope and to direct their energies towards improving their lives and the lives of those around them. If we fail, we will abandon them to emptiness, unemployment and the malicious ideologies of terrorism.

Every day that we take a step towards delivering economic development, creating jobs and raising standards of living, we undermine the ideologies of fear and hate that feed on hopelessness. We starve terrorist organisations of their reason to exist.

I am optimistic, because I know that the people of the Middle East possess a power of hope and a desire for stability and prosperity that are stronger and more enduring than opportunistic and destructive ideas. There is no power stronger than that of hope for a better life.

Mohammed bin Rashid Al Maktoum is vice president and prime minister of the United Arab Emirates and Ruler of Dubai.

Home
Print
Newsletter
More on this topic
Strategies for combating IS: Plea for a wide-angled view of the Arab WorldIslam and violence: Conservative Muslims refute the violence of ISThe genesis of Islamic State: A new chapter in the decline of the Arab worldThe Syrian conflict and the fight against IS: Time to treat allies like allies
Related Topics
'Islamic State' | IS, Al-Qaida, Democracy and civil society, Islam and democracy, Islam and the West, Jihad, Jihadism | Jihadists, Radicalisation
All Topics

Research project "The Global Qur'an", brainchild of Professor of Islamic Studies Johanna Pink and sponsored by the European Research Council, analyses the history and ... END_OF_DOCUMENT_TOKEN_TO_BE_REPLACED

As the Western world emerges from a holiday season made less festive by COVID-19, millions of children in Afghanistan are starting 2022 facing the prospect of famine, illness, and ... END_OF_DOCUMENT_TOKEN_TO_BE_REPLACED

A wedding extravaganza of bright colours, flowers, feasting and dancing, yet the bride, Nefie Eminkova, who comes from Bulgaria's Pomak – Muslim – minority, can see none of it. ... END_OF_DOCUMENT_TOKEN_TO_BE_REPLACED

Every year in December, the team at Qantara.de takes a look back at the articles that proved most popular with our readers. This year is no different. Here is a run-down of the ... END_OF_DOCUMENT_TOKEN_TO_BE_REPLACED

Jesus – Issa in Arabic – doesn’t merely enjoy the highest place among the prophets in the Koran. He is also revered in Islam’s mystical tradition for his message of love and mercy ... END_OF_DOCUMENT_TOKEN_TO_BE_REPLACED

The military in Sudan has never waged war against a neighbour, but it has already staged 17 coups. Tens of thousands of people are risking their lives to oust the military by ... END_OF_DOCUMENT_TOKEN_TO_BE_REPLACED
Author:
Mohammed bin Rashid Al Maktoum
Date:
Mail:
Send via mail

END_OF_DOCUMENT_TOKEN_TO_BE_REPLACED
Social media
and networks
Subscribe to our
newsletter