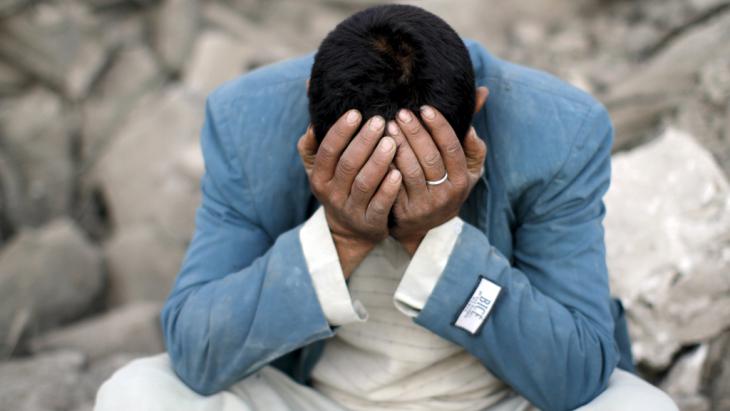 Global strategies in the war on terror
Eliminate the breeding grounds

One of the reasons for terrorism is a world order that is out of whack, which no longer reacts appropriately to crises around the globe, writes Syrian publicist Mohammed Dibou. Neither ″national″ nor ″continental″ measures can offer the protection craved by the West's citizens

In the wake of the Brussels bombings, it has become clear that Europe can no longer harbour any illusions of immunity from terror. Both Europe and the US (Boston) are being targeted as the number of attacks continue to mount up. Then, of course, there are the world's main trouble spots: in Asia, the Middle East (Syria, Iraq, Afghanistan, Pakistan etc.) and Africa (Boko Haram in and around Nigeria, Libya, Tunisia …).

Terrorism has become a global problem, hence it must be tackled globally. Yet, it is also necessary to identify the causes that sustain terrorism, rather than simply trying to find solutions on a regional level. Individual continents, including Europe, are currently attempting to protect themselves from terror and from the refugee crisis. At a time when the world is becoming increasingly globalised, it is paramount that the causes of terrorism, of which there are three main ones, are tackled globally.

The first and most important of these causes is to be found in the religious and theological tradition (Islamic, Christian, Jewish and others) from which fundamentalism draws its legitimacy. This tradition has never been subjected to any academic or religious criticism and needs to be deconstructed and rejected. To treat such a radical understanding of religion as merely aberration, some "discordant" deviation from the mainstream, is simply to gloss over the dangers of terrorism.

And in view of the fact that it is Islamic ideas that are currently proving the most fecund sources for terrorism, it is the responsibility of the Islamic authorities (whether Shia, Sunni or the smaller denominations of Islam), as well as of Islamic and secular intellectuals, to critically question their heritage and to sever ties with certain aspects of that heritage that are still being taught in many countries and institutions today. 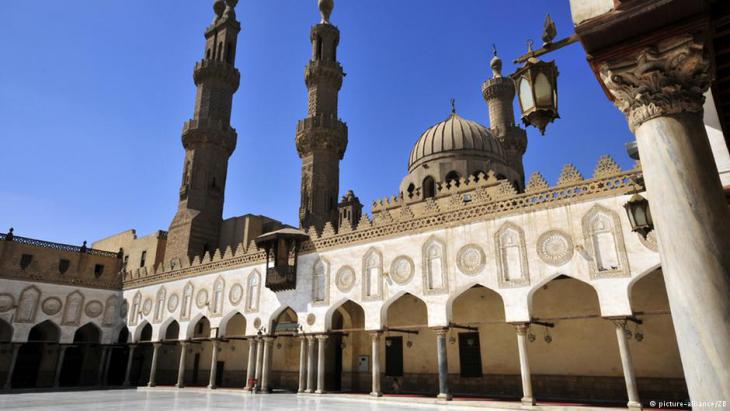 ″The prevailing ideology in institutions such as al-Azhar, or the religious schools in Afghanistan and elsewhere (all of them under dictatorial regimes), or the teachings of supposedly moderate believers, constitutes the raw material of extremism, because much of the content is absurd, magical and mythical,″ criticises Mohammed Dibou

That would be a revolution indeed, for many of these aspects overlap with fundamentalist religious concepts, providing them with the means to grow and achieve religious legitimisation. The prevailing ideology in institutions such as al-Azhar, or the religious schools in Afghanistan and elsewhere (all of them under dictatorial regimes), or the teachings of supposedly moderate believers fuels extremism, because much of the content is absurd, magical and mythical. This is especially true of the teachings ascribed to medieval scholars with their invocations of "unimpeachable" source texts.

Those religious minorities in Iraq that have been coming under the influence of IS also tend to have an understanding of religion that is full of superstition and magic and they use this to justify their own violence in the name of self-defence. What we are dealing with here is a kind of double-sided fundamentalism that is both self-referential and about reacting to the violence of its opponents.

The second cause of terrorism is tyranny, for tyranny can successfully propagate itself in the fertile soil that such fundamentalism creates and turn it to its own political purposes. Dictators are particularly adept at turning fundamentalist understandings of religion into political capital, especially if it allows them to play the role of guarantor against extremism, especially for the West. The nature of the charade no longer fools anyone, but its logic nevertheless continues to hold appeal for some Western intellectuals and politicians. One political party in Italy has already announced its intention, should it get into power, of re-establishing relations with the Assad regime in Syria.

It is time to abandon this idea that we must somehow be prepared to accept the lesser of two evils. Such thinking does nothing but play into the hands of dictators, strengthening their own positions by deliberately fanning the flames of extremism. 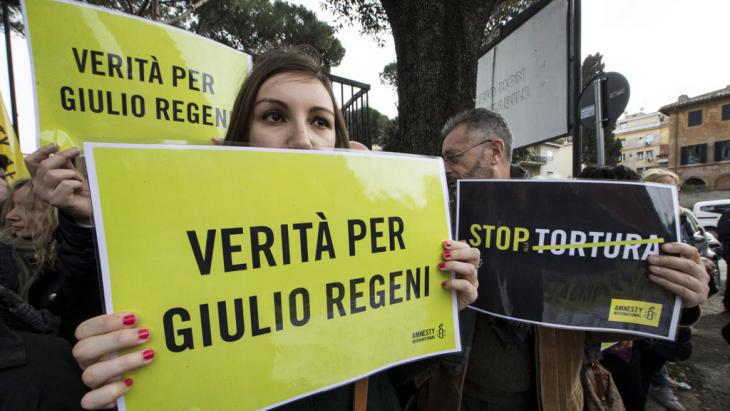 Protesting the brutal murder of Giulio Regeni: the student and journalist disappeared in Cairo on 25 January and was found dead nine days later. His body showed signs of severe torture, his toe and fingernails had been ripped out and his ears cut off

The European attitude is very significant when it comes to the issue of support for terror: the fact that an autocratic ruler like Egypt's President al-Sisi was invited to Europe, or that economic interests were given priority over human rights in dealings with an Iranian regime that actively supports Shia jihadists, are both important points in this respect. tdessen zu den Waffen greifen, um für Goittes SacheGottes Gesetze sind."essiven, verbrecheri

The brutal murder of Italian student Giulio Regeni (probably by Egyptian security forces) is one more incident to remind us of the futility of the European attitudetdessen zu den Waffen greifen, um für Goittes SacheGottes Gesetze sind."essiven, verbrecheri. Once again we have an example of the interests of the West coinciding with those of the dictatorships, through an attitude that reduces terrorism to a security issue while disregarding social, economic and human rights aspects.

Democracy is the only countermeasure against terror

The dictatorships that like to present themselves as combating terrorism are content to observe and suppress the fundamentalists during periods of stability, only to release them from prison the moment their regime is under threat. It is a tactic that allows the leaders of such countries to present themselves as the only alternative to religious extremists. The fact is, however, that while such countries lock up secularists and peaceful activists in prison, extreme religious beliefs are being taught in their schools and theological faculties.

Europe remains content to guard its external borders and economic interests and to turn a blind eye to the dictatorships that produce the terrorists. But it will have to change its attitude and put democracy right at the heart of the fight against terrorism – if it wants to win that fight. 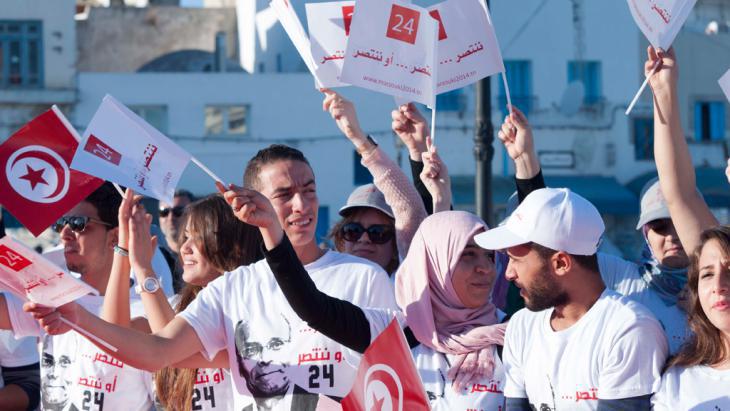 "Arabellion" role model: ″Tunisia is the only Arab country where the transition to democracy has been more or less successful. And that is why it has been able to fight terrorism on its own territory despite being surrounded by conflict zones and terrorist havens,″ writes Mohammed Dibou

The attack on the Tunisian border town of Ben Guerdane at the beginning of March showed how important this is. Tunisia is the only Arab country where the transition to democracy has been more or less successful. And that is why it has been able to fight terrorism on its own territory despite being surrounded by conflict zones and terrorist havens. All those dictatorships that have presented themselves as guarantors against terrorism, on the other hand, have failed. Democracy is the only successful means for fighting terror.

The third cause of terrorism is the current instability of the international order and its consequent inability to cope with the various crises around the world. In the opinion of US sociologist Saskia Sassen, the globalisation crisis has brought a systematic increase of exclusion and marginalisation and national and continental solutions, that claim to be about greater security, only lead to war and intervention worldwide.

After all, the terrorism that has taken root in Iraq, Syria or Nigeria is certainly not unrelated to Western interventions that have put the interests of the West and its citizens before those of the rest of the world.

Such "national" and "continental" solutions have proved themselves inadequate for the protection of the West's own citizens. The damage done by national policies in far-away places is now bringing consequences at home, as Brussels has shown.

A global solution is the only effective way of combating terror. Such a solution must take account of the considerations outlined above and acknowledge that establishing democracy and the rule of law in the south is as imperative as the preserving of security in the north. Without this, the terrorism in the world is not going to go away anytime soon.

Syrian journalist, novelist and social scientist Mohammed Dibou is a contributor to a number of leading Arab newspapers. He was arrested following the outbreak of the Syrian uprising in Damascus but later released.

In Doha, Arabs from Morocco, Tunisia, Egypt and Algeria are gathering to celebrate the first ever FIFA World Cup to be held on Arab soil. The criticism from Europe? Over the top, ... END_OF_DOCUMENT_TOKEN_TO_BE_REPLACED

November 2022 sees the Arab world firmly in the spotlight with the COP27 in Egypt and the FIFA World Cup in Qatar. Public trust in MENA governments is weak, thanks to their ... END_OF_DOCUMENT_TOKEN_TO_BE_REPLACED

Palme d’Or winner "Boy from Heaven" is a classic crossover film in which cultural elements are mixed together in haphazard and random fashion. Shady Lewis Botros bemoans the ... END_OF_DOCUMENT_TOKEN_TO_BE_REPLACED

COP27 in Sharm el-Sheikh is turning into a PR disaster for Egypt’s military regime. Instead of praise for the host, the news is full of solidarity for imprisoned activist Alaa ... END_OF_DOCUMENT_TOKEN_TO_BE_REPLACED

END_OF_DOCUMENT_TOKEN_TO_BE_REPLACED
Social media
and networks
Subscribe to our
newsletter