A Kind of "Moroccan Woodstock"

The Gnawa World Music Festival in Essaouira has steadily grown in popularity, especially among the younger generation. Islamist guardians of public virtue are watching with disapproval as Morocco's youth let down their hair and dance. Details from David Siebert 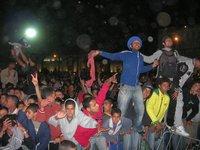 Gnawa World Music Festival in Essaouira recently celebrated its tenth year. All concerts in Essaouira are free of charge

​​When the venerable Gnawa master Maâlem Mahmoud Guinea takes the stage alongside pianist Cheick Tidiane Seck from Mali, the festival reaches its high point. Age-old melodies and songs waft through the Bab el Marrakesh. But the public listening to the sounds of traditional Gnawa music is a young one, a colorful and modern mixture of faces.

Ever since 1998, the festival has every year transformed the quiet port city on the Atlantic coast into a gigantic open-air stage. A hopping festival atmosphere pervades the air and for a few days sleep is unthinkable.

The public that wends its way night for night through the narrow alleys of the medina could hardly be more diverse: thousands of tourists flock here for the event. They mingle with Moroccans from every walk of life, from old men wearing jellabas to veiled women to hip young students.

Essaouira – a mecca for Gnawa fans

For urban youth, the festival is the highlight of the year. They arrive with their dreadlocks, punker outfits or Bob Marley t-shirts in overflowing buses from Casablanca and Rabat. No one wants to miss the biggest and most cosmopolitan festival in Morocco, if not the entire continent. The hotels are completely booked – many of the city's residents even move in with relatives and rent out their apartments to earn a few extra Dirhams.

The Gnawa Festival is a success story. It all started on a tight budget, which today at 600,000 euros has burgeoned to ten times the size. More than 400,000 people have gathered here every year since 2004. Big-name international artists have performed with the Gnawas: for example, Joe Zawinul or Pat Metheney. Guests from the world music scene have included Youssou N'dour, Salif Keita, The Wailers and Rachid Taha.

The mixture of mysticism and music offered by the Gnawas already piqued the interest of world travelers back in the 1960s. Jazz musicians such as Randy Weston and Archie Shepp came to Morocco to jam with the Gnawas. Essaouira became a hippie music mecca: Jimi Hendrix spent a few months here, and Cat Stevens and Led Zeppelin were also caught in its spell.

Musicians still come to Essaouira today from across the globe to play with the Gnawas. "These are the kind of spontaneous encounters you don't find anywhere else. Improvisation and exchange are what it's all about," commented musician Karim Ziad, co-organizer of the festival. The Algerian jazz drummer also knows about the communication problems involved: "The rhythms of the Gnawas are complex. They are hard to note down. That often leads to confusion."

Maâlem Mahmoud Guinea, right with his gembri guitar, and his band at the Essaouira festival. Guinea is one of the major figures of contemporary Gnawa music

​​World music experiments don't always succeed. The "Gnawa Rock Project," an effort by French bassist Loy Ehrlich to recapture the encounter between the Gnawas and hippies, has degenerated into a mere pose. And Maâlem Saïd Boulhimas' Gnawa combo is mired in Jimi Hendrix clichés.

The most impressive, highest-quality music is still produced in concerts where African artists come together. For example, when the Gnawas of Maâlem Abdelkébir Merchane met with the percussion group Yaya Ouattara Duba Dew from Burkina Faso and the Senegalese kora player Soriba Kouyaté to celebrate African music culture together up on stage.

The youth scene is also a permanent fixture in Essaouira. On the beach stage, Moroccan electro DJs join forces with the "Asian Dub Foundation" from London. The audience favorite is definitely "Hoba Hoba Spirit," representative of a new generation of Moroccan fusion bands that combine the traditional sounds of the Maghreb with rock and reggae, acting as mouthpiece of the Moroccan youth by agitating against political conditions in the country.

Up until the 1990s, Morocco's music landscape was more like a desert. Often, all that could be heard on the national radio stations were copied cassettes from the West, insipid Rai pop from Algeria or Arabian tearjerkers.

That's why the Essaouira Festival is such a milestone for Morocco: "In the beginning, skepticism prevailed. Nobody believed that something like this could be organized here. In the meantime, every big city has its own festival," explains Azoul Azoulay, co-founder of the festival and also advisor to the royal family.

The young King Mohamed VI is trying to modernize the country through democratic reforms. During his father's reign, culture was generally suspected of being subversive. The Essaouira Festival today reflects this process of opening up, while helping to hone the country's image and make it more attractive to tourists.

The Moroccan press even speaks of a "Moroccan Woodstock" and the "Essaouira spirit." "In Essaouira, the street is the guest of honor," writes the left-wing magazine "Journal Hebdo".

Islamists catch a whiff of decadence

It is all merely bread and games for the people? No, the Essaouira Festival is also at the center of a cultural showdown. The Islamist PJD Party ("Party of Justice and Development") could end up winning the upcoming parliamentary elections.

It denounces the "Westernization" of Morocco, accusing the Gnawa Festival of providing a refuge for "debauchery, drugs and homosexuality." The party's invective also extends to the open-air youth event "Boulevard des jeunes musiciens de Casablanca." "The PJD sees in these events a mixture of Sodom and Gomorrah," commented the Moroccan journal "Telquel."

And yet the defamation and threats of the Islamists leave the audience at Essaouira cold. This is where the youth of Morocco come to dance. >From glue-sniffing street kids, to students in neo-hippie look, all the way to the chic "jeunesse dorée" – everyone gets into the music here, no matter whether it's Gnawa or Hip Hop.

END_OF_DOCUMENT_TOKEN_TO_BE_REPLACED
Social media
and networks
Subscribe to our
newsletter