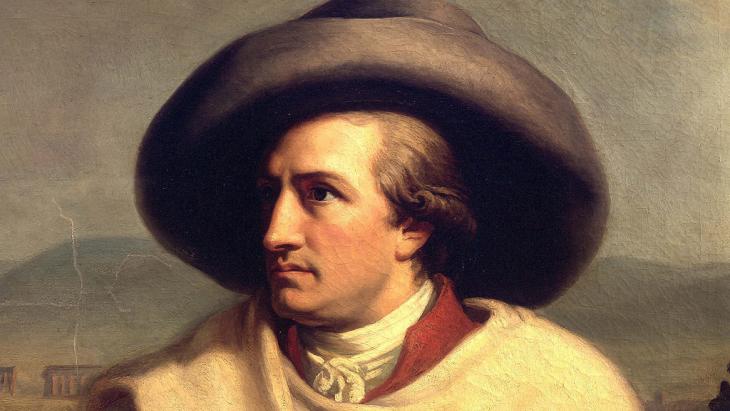 Goethe and the Orient

Why did the poet's mind wander to far-off climes?

When Goethe compiled over 200 poetic works to create his West-East Divan in 1814 and 1815, the 60-year-old had already been fascinated with the Orient his whole life. But what made the poet's mind wander to far-off climes? By Melanie Christina Mohr

This quatrain, with which he prefaces the prose section of the Divan, is not only of significance for the Divan reader but also for us today. Because if we want to understand how Goethe's enthusiasm for the Orient manifested itself, what conditioned it and let it ultimately culminate in the production of one of his most outstanding works, we first have to explore Goethe the man and of course the times in which he lived.

Inspired by the Enlightenment ideal of tolerance, and by seminal figures such as Voltaire, Goethe devoted himself throughout his life to art. He delighted in the beautiful things in life – the things that gave him pleasure, that could spirit him away on intellectual journeys and feed his hunger for knowledge. 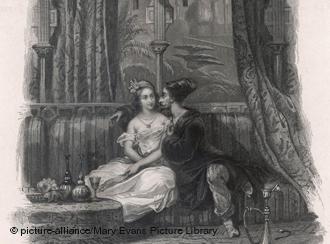 Even as a child, Goethe had enjoyed the Oriental flair of the tales in "One Thousand and One Nights". Fond of the genre in general, he was especially impressed by the narrative technique used in the Oriental book of tales

In addition to his in-depth studies of colour theory and his interest in astrology, these needs were satisfied in particular through his engagement with the Orient, which he found exceptionally fascinating. Already at a young age, the poet soaked up literary imagery and Oriental flair from the tales told by Scheherazade in the famous storybook "One Thousand and One Nights", better known in English as the "Arabian Nights".

While fond of the genre in general, Goethe was especially impressed by the narrative technique used in the Oriental book of tales. He therefore saw Schiller's offer to publish his stories in the literary journal "Die Horen" as an opportunity to formally follow in the path of his Oriental role model and offer the works as a series of episodes.

Soon, however, disagreements arose between the poet and his editor. Schiller wanted to print the individual pieces as self-contained stories and admonished Goethe in a letter not to insist on sequential episodes. But the German poet prince thought little of abiding by constraints and requirements imposed by others and thereafter breathed not a word about the dispute. It was only later that he noted elsewhere that a tale must always be told as an episode in a broader story, because this was the only way it could arouse curiosity and unfold its true intention.

When it came to art, Goethe was reluctant to listen to what others had to say. It was for good reason that Heine saw this particular period in art history as originating "at the cradle of Goethe" and presumed its end would be dated to the poet's death.

Even though Goethe was showered with praise his whole life long, and though his Orientalist poetry and writings as well as his intensive studies in this direction were greeted with pleasure and enthusiasm, some contemporaries who took a more critical view. Apart from the art period in which Heine in particular denounced Goethe's distancing himself from reality and his disinterest in politics in connection with the Orient, Goethe's devotees were frequently accused of trying to create a parallel world, an effort that was not deemed to be conducive to art. 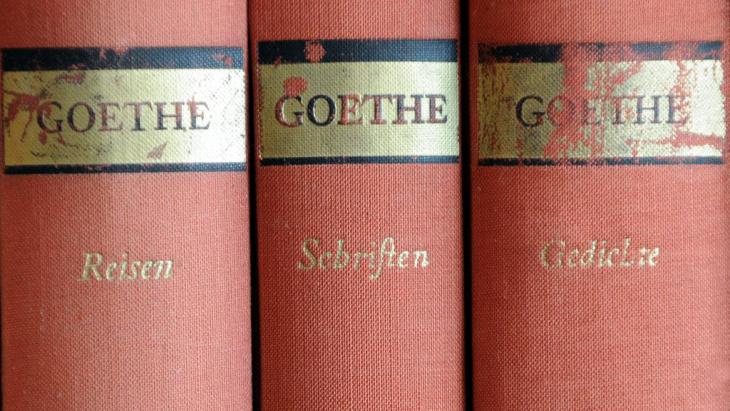 If Goethe had indeed scheduled a trip to the Orient in the early 19th century, he would probably not have managed to cross the borders of today's Europe. He suspected that the origin of humankind could be traced to the Orient, at the time hostile territory under Ottoman rule since the 16th century.

Goethe, however, who positioned himself in the context of his Orientalism as a cultural intermediary, made no secret of his deep sympathy for this mythical place and his indifferent attitude to modern-day realities. Let others find fault with him; despite having never set foot in the Orient, he persisted in publicly avowing the romanticized and subjective depiction evoked in his fictional travels.

If Goethe had indeed scheduled a trip to the Orient from the German states in the early 19th century, he would probably not have managed to cross the borders of today's Europe. The place that not only Goethe but also Herder and Kant presumed to be the origin of mankind, the Orient, was at the time hostile territory, under Ottoman rule since the 16th century.

On the origins of language

For Goethe, these lands not only embodied a source of inspiration and represented a kind of literary muse; he also saw in them the origin of the world religions, the so-called "cradle of civilization". When the poet's fictional travels took him to the Orient, for him this was tantamount to travelling into his own past, and to a place of collective identification for many of his contemporaries. By analogy, Goethe drew the conclusion that the origin of man must coincide with the origin of our language, which in his understanding found its purest expression in poetry, thus making the Orient our lyrical homeland.

Whenever the poet dealt with the Koran, which he did frequently and extensively, he made a point of highlighting the linguistic power and beauty of the Holy Book of the Muslims, to which, as he repeatedly stressed, he attributed no lesser value than the Bible. Even though he acknowledged that a full experience of the Koran was denied him due to his lack of Arabic, the poet nonetheless felt that his pronounced literary sensitivity was justification enough to hold the Koran in such high esteem. In the prose section of the Divan, Goethe discussed the difference between a prophet and a poet and made it clear that he sometimes found it difficult to reduce the Prophet Mohammad to the role of mere narrator of the holy texts and not to treat him as a poet instead. 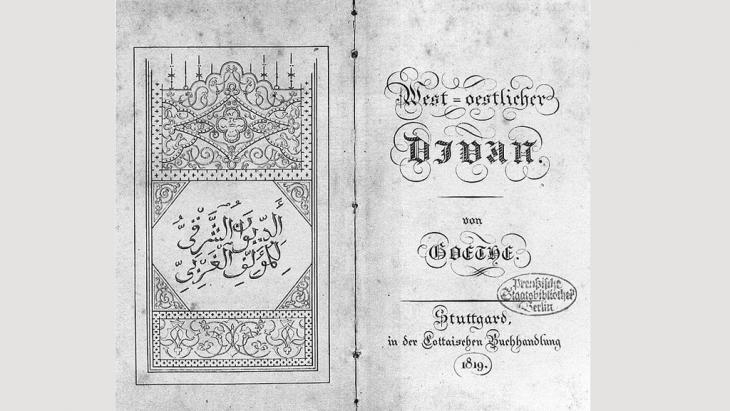 The West-East Divan (published in 1819 and expanded in 1827) is Goethe's most extensive collection of poems. It was inspired by the works of the Persian poet Hafez. Goethe's manuscript is part of UNESCO's Memory of the World Programme.

Goethe's high regard for the Koran was based not only on the brilliance of the language, however, but also the fact that he found some of its fundamental doctrines echoed in the Christian faith and was therefore able to establish a connection to the foreign religion.

What undoubtedly served as Goethe's prime inspiration to produce the Divan was what he referred to as his "twin brotherhood" with the Persian poet Hafez. Arguably the most important Persian poet of the 14th century, Hafez left behind a veritable treasure trove of lyrical productions. And so it came about that the German translation of the Divan of Hafez one day landed in Goethe's hands. As he read and studied the poet's work, Goethe developed an extraordinary admiration for his linguistic artistry, discerning many similarities with his own work while also drawing deep inspiration from Hafez's spiritual attitude.

Particularly during the period when he was writing his own divan, Goethe – as he often remarked – came to think of Hafez as an essential partner in a dialogue that allowed him to build a bridge between Orient and Occident through his poetry. He hence adopted the role of mediator between East and West that is still attributed to him even in the 21st century.

As both poet and individual, Goethe constructed an image of the "Orient" for himself that was as multifaceted as possible. The attentive reader therefore often finds himself afloat in a sea of associations, which the traveller, as he saw himself, left behind on his temporary mental flight to far-off lands, in order to finally conclude at the end: "Who knows himself and others well / No longer may ignore: / Orient and Occident dwell / Separately no more".

Home
Print
Newsletter
More on this topic
Interview with literary translator Hartmut Faehndrich: "What I don't see is an on-going interest in Arabic literature"Translations of Classical Islamic Literature: From the Emotional Orient to the Distortion of IslamInterview with Claudia Ott: "Love is the Language of the Orient"Qantara-Topic: German-Arab Literature Exchange
Related Topics
Arabic literature, Art, Dialogue of Cultures | Intercultural Dialogue, German-Arab Literature Exchange, History of Islam, Koran | Quran, Literature, Mysticism | Sufism, Travels in the Orient
All Topics

Investigations by German federal prosecutors into the evidence of chemical warfare in Syria are ongoing. Deutsche Welle and Der Spiegel gained exclusive access to witnesses and ... END_OF_DOCUMENT_TOKEN_TO_BE_REPLACED

Koshary is probably the most popular street food in Cairo. The Egyptian national dish, which consists of chickpeas, noodles, lentils, rice and tomato sauce, also lends its name to ... END_OF_DOCUMENT_TOKEN_TO_BE_REPLACED

Omid Nouripour fled Iran for Germany with his family at the age of 13. Today, he is foreign policy spokesman for Germany’s Green Party. He argues that societal differences should ... END_OF_DOCUMENT_TOKEN_TO_BE_REPLACED

Last week Egypt's police stepped up an "unprecedented escalation" on activists by arresting a leading rights group director. Advocates on the Nile have long weathered a crackdown ... END_OF_DOCUMENT_TOKEN_TO_BE_REPLACED

What drives young men into the arms of Islamist extremists – and how can they be re-integrated into society? Five years after the deadly attacks in Paris, urgent questions remain ... END_OF_DOCUMENT_TOKEN_TO_BE_REPLACED

END_OF_DOCUMENT_TOKEN_TO_BE_REPLACED
Social media
and networks
Subscribe to our
newsletter