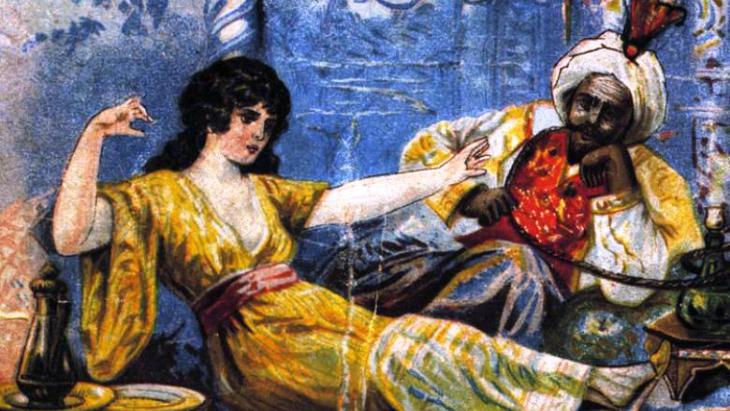 Goethe′s fascination with the "Thousand and One Nights"
Mephistopheles spoke; Scheherazade beguiled

To date, critical studies of Faust have given little consideration to its Oriental elements, in particular the fables from the "Thousand and One Nights". Goethe′s fascination with the famous storyteller Scheherazade, and his adoption of her narrative techniques and themes, has been underestimated. By Melanie Christina Mohr

Since the start of the 18th century, the Oriental fairytales from the "Thousand and One Nights" have enjoyed great popularity in Europe. The Orientalist and scholar Antoine Galland (1646-1715) took a manuscript from Syria and published the first edition available in the West, enabling a French readership to immerse themselves in the world of the storyteller Scheherazade.

Antoine Galland′s work, however, must be regarded as a free version, shaped by interpretations and omissions, and not treated as a faithful rendition. Like many of his contemporaries, the author thought it his duty to bend to the literary conventions of his time, and so it hardly seems surprising that the original tales, dominated by eroticism and passion, slipped into the genre of children’s and young people’s literature right at the start of their career in Europe, and still linger there today.

Galland didn′t just wrap the fairytales in the "cloak of conformity" of his time; he also took the opportunity to add a few of his own literary creations to the volume he authored, selling them to the local readership as Oriental originals. In spite of this, many subsequent translations took Galland’s version as their template. Goethe, too, was well acquainted with it. More than a few of his works, for example ″The Sorrows of Young Werther″ (1774) and the ″Conversations of German Emigrants″ (1795) suggest the influence of Antoine Galland’s version.

As children, little Johann Wolfgang and his sister Cornelia were already being read to from the Oriental fairytale book ″One Thousand and One Nights″. While their mother settled down into her ′story chair′, the little ones sat at her feet, tense with anticipation, feverishly awaiting the stories from the beautiful storyteller named Scheherazade.

Hooked on the magic of the Oriental narratives, the young Goethe listened almost breathlessly; when the thread of the story differed crudely from his own fantasies, however, he would leave story-time with a furrowed brow and a troubled mind. Indeed, not lacking in initiative, especially when it came to his own creativity, Goethe would frequently come up with a solution. 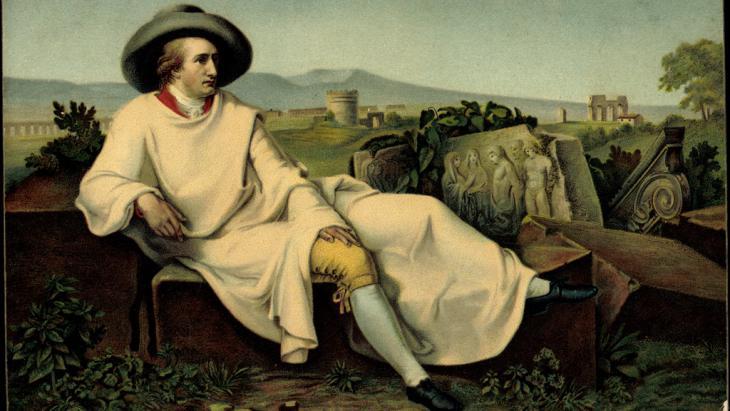 "It can be claimed with reasonable certainty that, had he not laid hands on the revised edition of the Oriental fairytales, we probably would not be able to enjoy the complete Faust today", writes Melanie Christina Mohr

The following day, he would pluckily seize the initiative and whisper his changed, coherent version into his grandmother’s ear. Apart from such divergences, he enjoyed his mother’s childlike love of storytelling and turning reality into enchantment. ″My build from Father I inherit / His neat and serious ways; / Combined with Mother’s cheerful spirit, / Her love of telling stories″[1], he later rhapsodised.

A lifetime companion for a life′s work

The art of making up stories, as is well known, was something the prince of poets was born with. And thus there was hardly a stage of Goethe′s life in which he did not give this passion absolute priority.

The year 1823 brought health problems for Goethe, and the author, by now 74 years old, was confined to bed and forced to take a break from his creative work. It was at exactly this time that the Breslau publisher Cotta, who was well aware of Goethe′s love of the Orient, made him a present of the first complete German translation of the Oriental fairytales.

This edition was based on a manuscript that a consul in Cairo had made available to the Orientalist Joseph von Hammer. It was understood to be the complete version, under the title ″Alf layla wa-layla″. Cotta Verlag commissioned the German translation of Hammer′s French version, allowing the fairytale volume to be extended with poems and rhyming prose.

Goethe devoured these ′paramount′ riches, and shortly afterwards turned his attention to the second part of his Faust drama, his muse rejuvenated and his head filled with enchantment, magic and illusion. It took six decades and the rediscovery of his lifelong literary companion for Goethe to finish the Faust drama – his life′s work – not long before his death.

It can be claimed with reasonable certainty that, had he not laid hands on the revised edition of the Oriental fairytales, we probably would not be able to enjoy the complete Faust today. 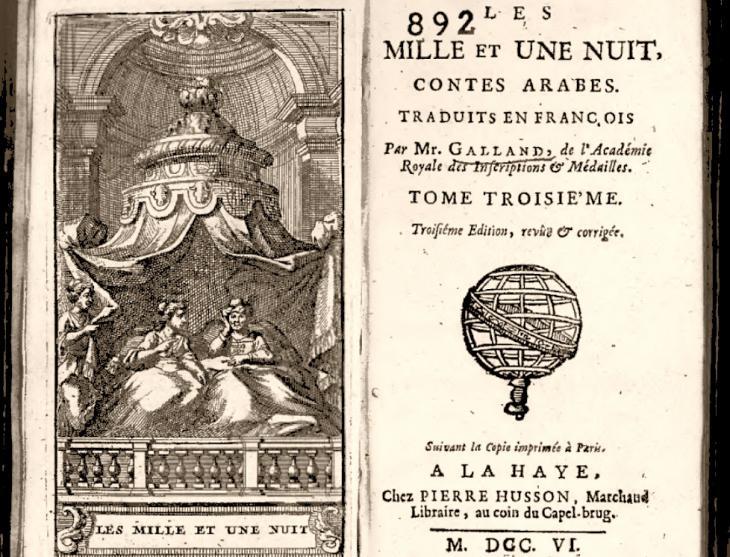 The fascination of "Thousand and One Nights": hooked on the magic of the Oriental narratives, the young Goethe listened almost breathlessly; when the thread of the story differed crudely from his own fantasies, however, he would leave story-time with a furrowed brow and a troubled mind

′Why should he shrink from picking flowers where he finds them? Only by making others′ riches our own does anything great come into being′, Goethe explained in conversation with his close friend Friedrich von Muller in December 1824. If you consider this quotation more closely, you will soon realise that Goethe is drawing a conclusion by analogy. Or more precisely, issuing an invitation: we should help ourselves to others′ art, taking in their themes and narratives and allowing ourselves to be inspired from head to toe, in order to finally create something new.

Magic and illusion in a sick bed

And that is exactly what he does. With Shakespeare, the Bible, Hafez and, last but not least, tirelessly and repeatedly with the Oriental tales of the "Thousand and One Nights". This is certainly not a case of copying; it goes much deeper, and involves the recognition of techniques and themes that are successful or even inspired, an eye for the unusual, and the gift of continuing to spin what others have created, introducing changes of perspective and using them to take his own work to new heights.

Goethe understands this art and goes back to work. Mephistopheles dominates as a storyteller in Faust, his devilish streak helping him slip into the skin of his angelic, Oriental antonym, the beautiful Scheherazade. Dreams and spells only come easily to Goethe after he has absorbed all the magic and illusion in his sickbed – the second part of Faust is therefore dominated by the supernatural, quite in keeping with his Oriental source of inspiration.

The reader may find the drama difficult from time to time; Goethe projects the loose structure of the fairytale in Faust Part II and fully explores his rediscovered enthusiasm for the much-loved storytelling technique, celebrating it to the point of ecstasy.

The second part of Faust is therefore hardly rigorous, and differs greatly in style and narrative from the first part. It is confusing in places, and makes understanding difficult for the reader. Even so, it remains a masterpiece, his masterpiece, which accompanied him almost to his death, and which we rightly still celebrate today.

In the course of my work on the poet and his Orient, I have come to value one individual in particular, whose work must be mentioned here.

There are few people who have examined Goethe, his work and life, his quirks and in particular his fascination with the Orient, as intensively as the literary scholar Katharina Mommsen, who is now 90.

The attention to detail with which she approaches this great master, and the philological precision of her examinations of Goethe demand great respect and appreciation.

Home
Print
Newsletter
More on this topic
Goethe and the Orient: Why did the poet's mind wander to far-off climes?Translations of Classical Islamic Literatur: From the Emotional Orient to the Distortion of IslamInterview with Claudia Ott: "Love is the Language of the Orient"
Related Topics
Arab world, Arabic language, Arabic literature, Islam and the West, Johann Wolfgang Goethe, Languages, Literature, Orientalism, Places of Dialogue, Translation, Travels in the Orient
All Topics

Since President Abdul Fattah al-Sisi seized power in Egypt in 2013, he has ruled the country with an iron fist. Civil society, opposition and free press struggle to survive. Tens ... END_OF_DOCUMENT_TOKEN_TO_BE_REPLACED

The lack of grain supplies from Ukraine is forcing Egypt to act. Now even the Toshka project is being revived to grow grain in the desert. Birgit Svensson travelled to see it END_OF_DOCUMENT_TOKEN_TO_BE_REPLACED

In this unusually beautiful book of images and text, published in German and Arabic, artist Marianne Manda presents her own unique take on the megacity of Cairo. In over fifty ... END_OF_DOCUMENT_TOKEN_TO_BE_REPLACED

A stage, lights, a mesmerised audience: it looks like an Egyptian folkloric concert, but Umm Sameh is singing to heal the sick by driving out the demons that possess them END_OF_DOCUMENT_TOKEN_TO_BE_REPLACED
Author:
Melanie Christina Mohr
Date:
Mail:
Send via mail

END_OF_DOCUMENT_TOKEN_TO_BE_REPLACED
Social media
and networks
Subscribe to our
newsletter