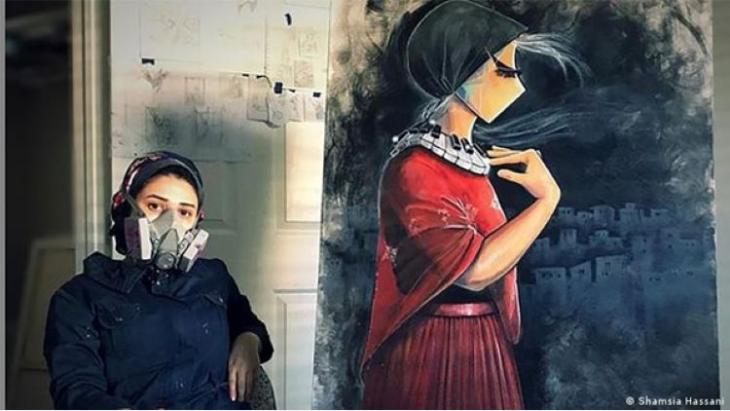 Afghanistan's first female street artist depicts Afghan women as they face renewed Taliban threats. Despite the danger, she pursues her work of resistance. By Cristina Burack

Shamsia Hassani had already reached a certain level of international success over the past years. As Afghanistan's first female graffiti and street artist, known for her bold promotion of women's voices, she had travelled to do on-site murals and participate in residencies and gallery exhibitions in numerous North American, European and Asian countries.

She landed on Foreign Policy's 2014 top 100 global thinkers list and was included in the second volume of Goodnight Stories for Rebel Girls, a best-selling collection of portraits of game-changing women from around the world.

This past week, as the Taliban took power in one Afghan province after another, eventually capturing Kabul, Hassani's presence on social media found even greater resonance.

Two powerful images showing girls in radiant blue carrying images of hope as dark, menacing gun-toting fighters loom over them – expressions of the extreme fear, despair and violent repression Afghan women now face – earned tens of thousands of likes on Instagram and were shared thousands of times on Facebook.

Hundreds of followers commented in response, concerned and praying for the women of Afghanistan and for the Kabul-based Hassani's safety. 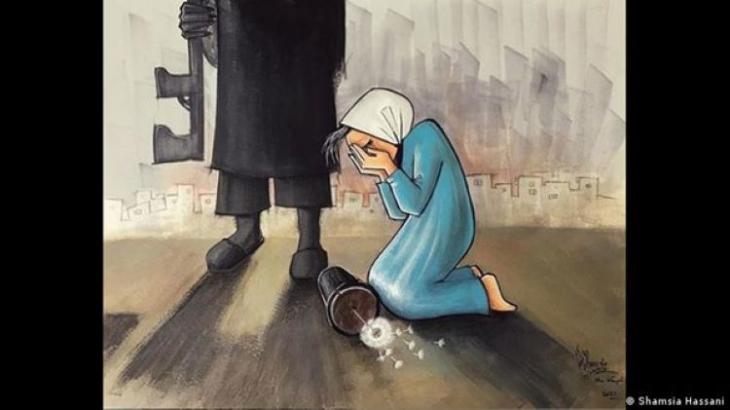 Over the past week, women have largely avoided the capital's public spaces, and many artists have deleted chat messages and social media accounts, fearful of violent, potentially fatal repercussions by the Taliban.

After Kabul's takeover by the Taliban, Hassani's social media accounts went silent for a few days, leaving fans wondering about her safety.

A new image in her recent series was finally published late last Tuesday, entitled Death to Darkness – confirmation that she was continuing to work and give voice to the experience of Afghan women.

Hassani's manager revealed that the artist was not available for an interview but was in a safe, undisclosed location.

Publishing the images is a bold move. Most analysts and human rights activists believe the Taliban will institute draconian restrictions and deadly punishments for women, as they did during their rule in the 90s.

Female artists face a doubly dangerous position as women and as creatives doing work that the Taliban has considered in the past to violate its strict interpretation of Islamic law.

"Some people think that art is not allowed in Islam and then they feel that they should stop me … If a lot of closed minds come together, they will be very powerful and they can do anything," Hassani said in a 2016 video interview for The Creators Project. 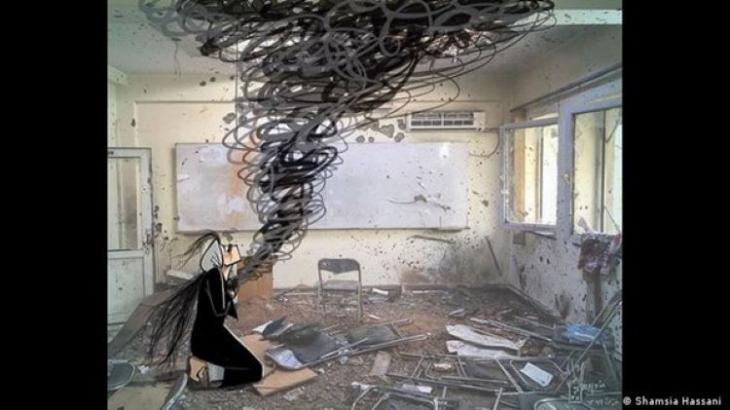 Hassani also uses her art to respond directly to attacks by the Taliban and other extremist groups, creating searing images of pain and loss. A composite paint-on-photograph work from November 2020, shown here, expresses grief in the aftermath of an attack on Kabul University, where Hassani is professor of fine arts

Born in 1988 in Iran to refugee Afghan parents, Hassani returned to Afghanistan in 2005 to study painting and visual arts at Kabul University. She had already completed her degrees when she took up graffiti and street art in 2010.

The precarious situation of women and girls in the male-dominated Afghan society has been at the forefront of her work since she started spraying.

In fact, graffiti's ability to publicly highlight the challenges that Afghan women face – but also their strength and resolution – was a major reason Hassani chose to work with the medium, she told Street Art Bio.

She wanted to change how people perceive Afghan women, including those who wear the burka, a full-body covering, she said: "I try to show them bigger than what they are in reality, and in modern forms, shaped in happiness, movement, maybe stronger. I try to make people look at them differently."

Hassani has also used her art to respond directly to attacks by the Taliban and other extremist groups, creating searing images of pain and loss. A composite paint-on-photograph work from November 2020 expressed grief in the aftermath of an attack on Kabul University, where Hassani is a professor of fine arts.

A grey-toned image from May of that same year was made in response to a deadly attack on a maternity ward. 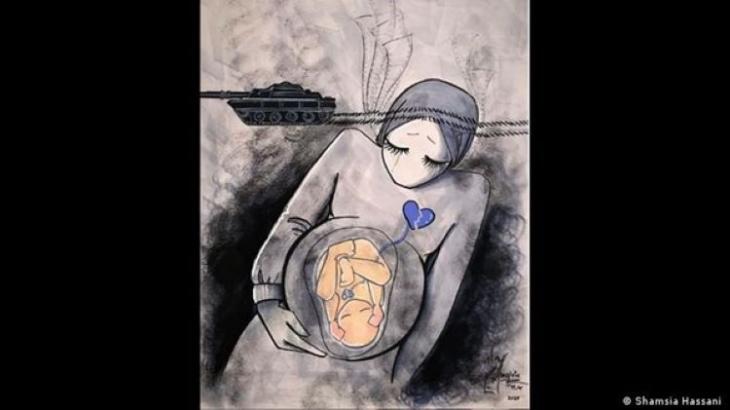 Graffiti's ability to publicly highlight the challenges that Afghan women face – but also their strength and resolution – was a major reason Hassani chose to work with the medium. Her aim? To change the popular perception of Afghan women, including those who wear the burka. "I try to show them bigger than they are in reality, and in modern forms, shaped in happiness, movement, maybe stronger. I try to make people look at them differently"

She cannot see her future

The depictions of women across Hassani's body of work express a broad spectrum of emotions: longing and defiance, hope and heartbreak, freedom and fear. They tend to be boldly outlined geometric figures with lustrous colours whose many shades meld together seamlessly. Long, thick eyelashes fall over closed eyes as hair flows from under headscarves or freely like film rolls or medusa tentacles. They have no mouths, but often have elements of nature or instruments incorporated into their figures.

"I use them [music instruments] as a symbol for women to play her voice with it. She can use musical instruments to talk with people, to speak louder and [get] more attention, as she has no mouth. But this musical instrument gives her power to speak in society," Hassani explained in 2018.

Defying her own fear to work in public

The public nature of graffiti also attracted Hassani, who thought it was a good way to introduce art to people who have little chance to visit a gallery or museum. Yet working creatively in public as a woman in Kabul – even when the city was under Afghan government control – had its risks.

On the streets of Kabul, she would do graffiti that was not too large, so she could move quickly. To circumvent these challenges, she started taking photographs of buildings and painting her graffiti directly onto the snapshots, calling it her "Dreaming Graffiti" series.

Hassani works rapidly in her studio, too, which has led to a prolific output that includes everything from large-scale canvases to miniature series on dollar bills – a commentary on U.S. foreign policy.

Despite her success in the artistic world, Hassani admitted in 2018 to sometimes feeling hopeless, unable to make a difference. Nevertheless, she said she is dedicated to giving power and strength to people through her art: "I think that I change people's minds with my artwork and sharing my ideas with people."

With her recent images, she is publicising the plight of women and girls in Afghanistan and helping to ensure they are not forgotten.

Very different Western reactions to the suffering in Ukraine and the Arab world show that there is a profound rift among cultures. Essay by Michael Young END_OF_DOCUMENT_TOKEN_TO_BE_REPLACED

The documentary "Nadia" tells the incredible story of Nadia Nadim, who was forced to flee from the Taliban as a child and became a football star. By Annabelle Steffes-Halmer END_OF_DOCUMENT_TOKEN_TO_BE_REPLACED

Three award-winning female directors appeal to the international film industry to save Afghan cinema. Supporting women filmmakers is more important than ever. By Christine Lehnen END_OF_DOCUMENT_TOKEN_TO_BE_REPLACED

Russia's ranking on the World Press Freedom Index has fallen again over the Kremlin's wartime censorship of the Ukraine conflict. From Myanmar to Mexico, journalists continue to ... END_OF_DOCUMENT_TOKEN_TO_BE_REPLACED

Ideally, those Europeans currently welcoming Ukrainian refugees would show the same sympathy to Syrians, Afghans and others fleeing war beyond the continent. But, argues Ian ... END_OF_DOCUMENT_TOKEN_TO_BE_REPLACED

END_OF_DOCUMENT_TOKEN_TO_BE_REPLACED
Social media
and networks
Subscribe to our
newsletter