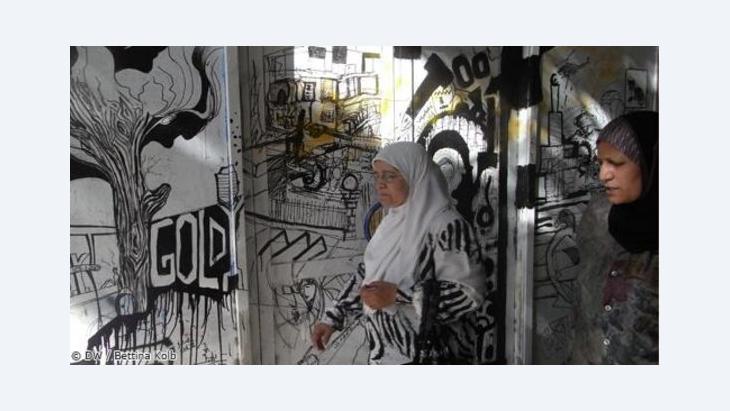 Graffiti in Tunisia
A Weapon for Civil Resistance

﻿After the revolution, Tunisia pours its troubles on its walls. Artists celebrate the people's victory through mural blows. Graffiti invades the cities' walls. Thameur Mekki reports from Tunis

"I have always asked myself why there are no graffiti in Tunis! Why are the walls either dirty or white? Why aren't there any street works of art? Aren't there any scrabbles? Nor any messages (apart from EST, ESS and CA). Is this a sign of an advanced society? Muslim? Or are we still far away from this globalized culture?" the blogger Zizou from Djerba was asking himself in 2005.

Today, in January 2012, graffiti are everywhere. In metro and train stations, in the city and suburbs' streets, in faculties and colleges, in chic and popular areas. Simply everywhere! Even in the sit-ins. Graffiti has become the symbol for a free, progressive and creative Tunisia.

"Up until the revolution graffiti had been limited to restricted circles of the underground scene. Moreover, people had a bad image of graffiti. They perceived what we do as vandalism rather than a type of art in itself," explains the young graffiti artist Hafedh Khediri alias Sk-One.

Graffiti has become the symbol for a free, progressive and creative Tunisia. Pictured: Graffiti by Sk-One

​​"From now on, whoever speaks of freedom of expression speaks of street art. Under the dictatorship, we were in a glass cube. This glass cube has exploded and now are sharing our art with the whole society," adds Mouin Gharbi alias Meen One.

This young graffiti artist does not contradict what the blogger from Djerba had written six years ago. "Before the Revolution, those who tagged walls were especially the young members of groups of fanatic football supporters in a logic of competition with other football team supporters," states Mouin Gharbi. "Now, even if it is technically limited, the marking of territory has helped graffiti to become popular in Tunisia." From now on, he adds, some of them want to go from simple tags to frescos.

The streets in Tunis are full of 'tags', the most basic writing of a graffiti artist's name. Certain graffiti artists adapt this urban art to their local style by adding a touch of arabesque calligraphy. But the marking of territory still haunts certain Tunisian taggers. For Meen-One, it is a threat and he goes on to say that "today, we need more solidarity between graffiti artists. It is important not to enter the logic of marking territories. It is meaningless when one wants to develop one's performance and contribute to social dynamics." 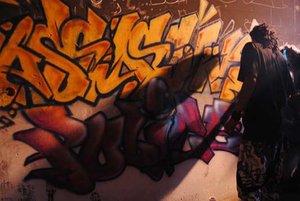 "Graffiti has now established itself and holds an important place in the Tunisian cultural landscape." Pictured: Meen-One working on one of his graffitis in Thala, west-central Tunisia

​​There are many historical events where civilians responded to political tension with an awesome weapon: Graffiti. It is the same thing in Tunisia where walls are no longer white, where people have given up silence. In such a particular context, a different relationship develops between State institutions and graffiti artists.

According to Sk-One, state officials have become more flexible, more approachable. "Before the Revolution, it was useless to try and get in touch with them. Nonetheless, there is still a long way to go in this sense." The majority of them holding libertarian values, Tunisian graffiti artists continue to expand the realm of the possible.

"The local council should not paint wall covered with our graffiti. This is public space, the property of the people," claims Meen-One in an anarchist tone before moderating: "Why not create graffiti parks or dedicate spaces for graffiti like in Europe. Local councils should understand that even if we tag messages against the system, we help break the monotony of walls. These colours make our cities vivacious."

At present, even political parties are seduced by our graffiti. Some of them even used them during their electoral campaigns. Meen-One disagrees: "I am against this political appropriation of graffiti. A graffiti artist should be independent. It is an art with anarchist tendencies and should play a whistleblower and counter-power role."

From the streets to galleries

In this post-revolutionary phase, graffiti has also found its place in art galleries. Sk-One, the first graffiti artist to have exhibited in Tunisia in November 2009 says: "There is more support and more encouragement now. We are contacted very often to participate in artistic events. Graffiti has now established itself and holds an important place in the Tunisian cultural landscape." 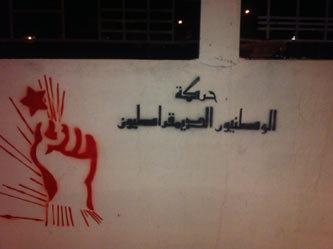 An art with anarchist tendencies: some artist and activists feel that graffiti must not be appropriated by 'the powers that be'

Sk-One believes that in a way, this interest is part of a fashion trend. "Some galleries follow this trend without having any real knowledge about graffiti. Time will tell and only the true artists will find their place," states the young artist.

Today, this impetus of freedom in Tunisia enables people to get organised and a more dynamic civil society is beginning to emerge. Among the hundreds of organisations created since the fall of dictatorship, "Art Solution" was founded by two young Tunisians. Chouaib Brik, co-founder of this association, explains: "Graffiti, rap or b-boying (i.e. breakdance, the editor) is all part of hip-hop culture. And we seek to bring all these artistic disciplines together, to create a homogeneous universe in our events."

The different fans of urban stations gather to assist battles between b-boys. Rappers and DJ's are in charge of the music and the graffiti artists do their show. "There are no associations dedicated to what we do. Even the plastic arts union does not struggle to defend graffiti artists. It is important to have the support of such an association," explains Meen-One who participated in some events organised by Art Solution. 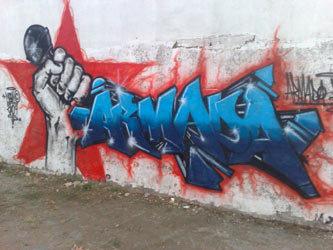 Thameur Mekki: "Today, this impetus of freedom in Tunisia enables people to get organised and a more dynamic civil society is beginning to emerge"

​​One of these events took place last July in Thala, close to Kasserine, west-central Tunisia, a region where policemen shot dead dozens of martyrs. The graffiti artist gave a performance at the police station that was vandalized and burnt during the revolt.

"The fact that graffiti is present in b-boying or rap events allows us to connect with an audience that is not necessarily initiated to our art. This is how certain graffiti artists share their experiences and how the rap and b-boying audience discover graffiti. It creates a space for exchange that is quite rewarding," explains Meen-One. This complementarity between hip-hop culture fans enables them to install a particular dynamic context where new forms of artistic expression still lack production and distribution facilities.

It is not the bureaucracy of State institutions that would boost things up. "They hardly support us. We always find ourselves in a ping-pong situation between different administrations," state Chouaib Brik of Art Solution Association.

"Graffiti has even become a reference point for some. In order to distinguish a train station from another before arriving, we say: 'get down at the stop that is right after the 'Fight for your rights' tag". Until the State devote a place worthy of their works in public space, Tunisian graffiti artists do not sit on their hands. They occupy the agora.

Thameur Mekki is a journalist at the Tunisian web-magazine TeKiano.com.

Translated from French by Elizabeth Grech

Syria, Egypt, Saudi Arabia and the UAE are among those countries increasingly misusing cybercrime legislation to silence dissent and curb freedom of speech. Could a new global ... END_OF_DOCUMENT_TOKEN_TO_BE_REPLACED

A new exhibition, "Syria – Against Forgetting", at Cologne’s Rautenstrauch-Joest-Museum focuses on Syria's artistic and cultural heritage and pays tribute to the country before ... END_OF_DOCUMENT_TOKEN_TO_BE_REPLACED

This year’s Morgenland Festival opened with the premiere of Kinan Azmeh’s musical theatre piece, “Songs for Days to Come”, based on fifteen poems by contemporary Syrian poets. ... END_OF_DOCUMENT_TOKEN_TO_BE_REPLACED

Longlisted for the 2020 International Prize for Arabic Fiction and now available in German translation, Khaled Khalifa’s novel “No One Prayed Over Their Graves” details lives and ... END_OF_DOCUMENT_TOKEN_TO_BE_REPLACED

Rumi's poems, though generally stripped of their Islamic symbolism, are hugely popular around the world. Yet Islamic mysticism is still very much at the heart of these verses. ... END_OF_DOCUMENT_TOKEN_TO_BE_REPLACED

END_OF_DOCUMENT_TOKEN_TO_BE_REPLACED
Social media
and networks
Subscribe to our
newsletter