"The System Has No Religious Merit"

Grand Ayatollah Montazeri was once designated to step into Khomeini's shoes as supreme leader, but shortly before the latter's death he was demoted for his criticism of the regime. Today he is one of the system's most outspoken critics and reform advocates. On 11 July he issued a declaration denying the regime's legitimacy. Urs Sartowicz has the details

Sentences of unprecedented clarity: Hossein Ali Montazeri's fatwa is one of the most vehement attacks on the regime from within the Iranian clergy

​​"A regime that uses clubs, oppression, aggression against [the people's] rights, injustice, rigged elections, murder, arrests, and medieval or Stalin-era torture, [a regime that] gags and censors the press, obstructs the media, imprisons intellectuals and elected leaders on false allegations or forced confessions... – [such a regime] is despicable and has no religious merit..."

Rarely have the differences between Iran's pro-regime figures around the Supreme Leader Ali Khamenei and its pro-reform forces become so clear as in the weeks since the controversial presidential elections in mid-June. Nothing illustrates more clearly how deep the rift within the country's system is than the statement of religious opinion (fatwa) written by the cleric and dissident Grand Ayatollah Ali Hossein Montazeri in response to his student Mohsen Kadivar's questions and published on his website on 11 July.

When a regime loses its legitimacy

In the declaration, which is several pages long, the revered cleric takes a stand on the question of when a regime loses its legitimacy and how to deal with such a regime. His answer is that it is not only legitimate to topple a regime that no longer has the support of the majority and only clings to power through deceit and violence, but believers even have the religious duty to bring about its end by peaceful means. 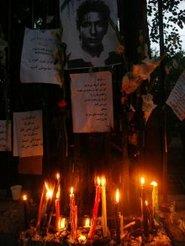 Candles for the victims: The preservation of the Islamic Republic, Montazeri concludes, does not justify the use of violence

​​The state, the scholar argues, belongs to the people and the government must serve the people. It is not necessarily an obligation to maintain the system, especially not if that system only serves the interests of one person. The preservation of the Islamic Republic, he concludes, does not justify the use of violence; instead, particularly the educated classes and the clerics have the task of rising up against their oppressors.

It is not just these sentences of unprecedented clarity that make the text so potentially explosive. It is above all the author's religious and political standing that make his fatwa one of the most vehement attacks on the regime. Grand Ayatollah Montazeri is not just any cleric, but one of the highest religious authorities in Iran. Millions of Muslims acknowledge him as a "source of emulation", setting an example on religious subjects.

The 87-year-old cleric has long been one of the most significant critics of the regime and its Supreme Leader Khamenei. He has been under house arrest for many years, his opportunities for teaching and issuing public statements severely restricted. Many of his pupils and followers have been persecuted and arrested, but Khamenei has never dared to have the man himself imprisoned.

One reason is his religious authority and unbroken popularity – born to poor peasants near Isfahan, the grand ayatollah is regarded as down to earth, modest and incorruptible – and another is his political significance. Montazeri is not only one of the fathers of the constitution, he was also designated as heir to Ayatollah Ruhollah Khomeini's office as Supreme Leader until shortly before his death in 1989.

"Fruit of my life

As a long-term confidant and pupil of Khomeini – who once referred to him as the "fruit of my life" – Montazeri had been elected his successor in 1985 at Khomeini's suggestion. But the subsequent years saw increasing differences between the two men over human rights issues. Montazeri, who had spent many years in prison himself under the Shah, was particularly critical of the treatment of political prisoners.

Montazeri, who had spent many years in prison himself under the Shah, was particularly critical of the treatment of political prisoners during Khomeini's reign

​​When Khomeini ordered the execution of all members of the opposition People's Mujahedeen after their failed invasion in July 1988, Montazeri wrote two letters condemning this step as un-Islamic, unlawful and politically unwise. In a speech on the tenth anniversary of the revolution in February 1989, Montazeri went even further, accusing the regime of having betrayed its own values and goals.

When Montazeri's two letters written to Khomeini in the summer of 1988 ended up in the hands of the BBC in March 1989, his fate was sealed. Khomeini had Montazeri dropped as his successor, banning him from any further participation in politics in a letter accusing him of naiveté and weakness. After Khomeini's death several months later the then president Ali Khamenei was elected the new supreme leader.

Doubts about Khamenei's ability to exercise the office

Yet in contrast to Montazeri, Khamenei was only a middle-ranking cleric. The constitution had to be changed overnight to enable his election, also promoting him to an ayatollah. Many clerics and broad swathes of the population had lingering doubts about his ability to exercise the office. Montazeri is one of those who have repeatedly denied his legitimacy.

Iranian clerics read papers as they wait for the house arrest to be lifted in order to meet Grand Ayatollah Montazeri, January 2003. Montazeri was not released, however, before 2004

​​Having concentrated on teaching in the initial years after his demotion, the grand ayatollah has been raising his voice on political issues again since the mid-1990s. He began firing his criticism, which first ignited against political practice, more and more against the system itself. The result was an open confrontation when he made a clear profession of support for Mohammad Khatami's reform policies after his election in May 1997.

In a speech to religion students in the scholarly city of Qom in November 1997, he attacked Khamenei personally for falsely claiming religious authority and attempting to control the religious seminars in Qom. He did not have to wait long for a reaction to this attack: his office was ransacked, his house arrest intensified and several of his students, including Mohsen Kadivar, were imprisoned.

This did little to harm Montazeri's reputation, however. In fact it attracted even more attention for his demands for reform of the system. He formulated his ideas in several texts published on his website. Sadly, his health deteriorated to such an extent that he was released from house arrest in 2004, at the request of a group of parliamentarians.

Yet his recent public statements show just how significant he still is. Only days after the 12 July election, Montazeri criticised the outcome, saying "no one in their right mind can believe" it. He demanded that the government investigate the fraud, refrain from violence and allow opposition forces political participation, as the system and Islam itself would otherwise lose further respect.

In a subsequent declaration, he accused the regime of violating all Islamic principles through its suppression of the protests, and of having made the methods of the Shah regime its own. He concluded: "If Iranians cannot talk about their legitimate rights at peaceful gatherings and are instead suppressed, complexities will build up which could possibly uproot the foundations of the government, no matter how powerful."

This can be read as a warning, but also as a threat.

Interview with Amir Sheikhzadegan
A School for Democracy in Iran
Amir Sheikhzadegan is of the opinion that the supporters of Karroubi and Mousavi have learned from the earlier experiences of the reform movement under former president Khatami and have made a conscious decision to demonstrate peacefully and voice realistic political demands. Alessandro Topa spoke to the Iranian sociologist

Persecution of Ayatollah Boroujerdi in Iran
The State Fears the Traditional Clergy
The case of the traditionally oriented but politically critical Ayatollah Boroujerdi shows that the alliances among the clerics in Iran are becoming increasingly fragile. The calls for a separation between state and religion are getting louder. By Ghasem Toulany

END_OF_DOCUMENT_TOKEN_TO_BE_REPLACED
Social media
and networks
Subscribe to our
newsletter