The Turkish government's decision to allow the Orthodox patriarch to celebrate a liturgy at the ancient Panagia Soumela Monastery near Trabzon indicates that Ankara intents to further strengthen the rights of religious minorities in the country. Iason Athanasiadis reports from Trabzon 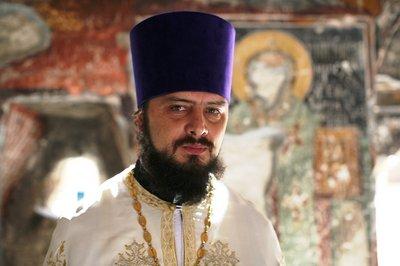 A new chapter for the Orthodox Christian church in Turkey? This priest belongs to the Russian Orthodox Church which, along with the Patriarchate in Istanbul, was instrumental in convincing the Turkish authorities to grant the permission for the liturgy to happen

​​ Cries of "Axios! Axios!" ("Worthy! Worthy!") swept up from the amphitheatrical monastery in a crescendo of sound as Ecumenical Patriarch Bartholomew descended the stone steps into a space that had remained silent for nearly 90 years.

Two hours later, the first Greek Orthodox liturgy to sweep over the holy Panagia Soumela monastery, one of the most emotive of the abandoned Greek Orthodox sites dotting Turkey, had finished. After the priests' last chants vibrated into the ether, many of the five hundred pilgrims, politicians and ecclesiasts who crowded into the monastery yard blinked at each other, seemingly just registering the enormity of what had transpired. 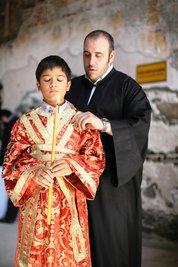 A historic moment: Ethnic Greek Orthodox Christians in Turkey have waited for more than 80 years to hold a ceremony in the monastery that was originally built in 386 AD

​​ The silence engendered by an intractable ethnic conflict was broken in a demonstration that the century-old forcible removal of the area's Pontic Greeks as part of the population exchange is finally being surmounted.

"Our ancestors' souls have been released," said Thanassis Stelidis, a musician from the northern Greek port of Thessaloniki who performed a solo on his three-stringed lyra, also called the kemenche, to the hushed audience during the two-hour ceremony's most emotive part. "All these years, we were forced to fulfil our debt to our ancestors by coming secretly to light candles in their memory, banned from playing the lyra and having to make our prayers and the sign of the cross away from the Turkish authorities' eyes."

"Today," Stelidis emphatically stated, "we can finally do all this again in the open."

Unsurprisingly, it was a politician from the Islamic AK Party rather than Turkey's western-oriented and secular Kemalist left that granted permission for the one-off mass. Newspapers took the hint, conjuring up headlines that connected the event with the neo-Ottomanism currently infusing Turkish political life: "A Prayer for Nine Sultans", was the tabloid Posta's title, in a reference to the Patriarch mentioning the monastery's Ottoman patrons.

Panagia Soumela, a dramatically located monastery that rambles across a steep rock face over 1000 metres above the Black Sea, holds a special sensitivity and resonance for Pontic Greeks. "For us, Panagia Soumela is like a patrida," said a pilgrim attending the Mass who declined to give his name, patrida meaning homeland, or home. 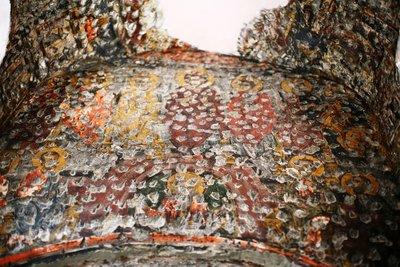 Resolute iconoclasm: The paintings of Greek Orthodox saints had been vandalised by 18th century Turkish religious fundamentalists who believed that any representation of the human figure is a sin

​​ The monastery was abandoned at the conclusion of the failed Greek invasion of Asia Minor in 1923 as up to half a million Pontics were forced out, according the Greek-Turkish population exchanges. Tens of thousands were killed on both sides during the bitter guerrilla campaign that scarred the area.

It was this bad blood, in contrast to the peaceful evacuation of other centres of Hellenism such as Cappadocia, that had Turkish government and Patriarchal officials worried about Sunday's liturgy. Thousands of police and elite military units in patrol cars and armoured vans were deployed in concentric rings around the monastery, controlling both tarmac and dirt roads.

With so much history weighing down, it was a surprise that the service was carried through at all. Events in the lead-up did not help either. Three Molotov cocktails exploded in the yard of the Turkish Consulate in Thessaloniki two days before the liturgy. A Turkish newspaper reported that a Greek hyper-nationalist group desecrated a Muslim cemetery in northern Greece, and in the nearby city of Trabzon, where police pre-emptively arrested three nationalists who had set up a Facebook group calling for the disruption of the ceremony. 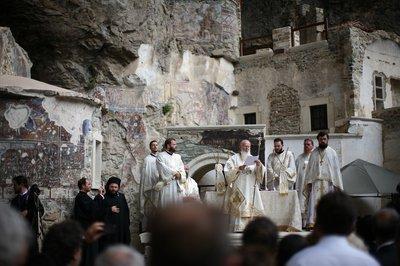 "Today, the tears of the Virgin Mary have dried up," Bartholomew said in a speech delivered in Greek and Turkish. Bartholomew I is the Archbishop of Constantinople, New Rome and Ecumenical Patriarch, and thus "first among equals" in the Eastern Orthodox Communion

​​ Arslan Bulut, a commentator for the hardline nationalist Yeni Cag newspaper, wrote that the AK Party was promoting a hidden agenda "to revive Christianity". He held the government responsible for its policy of allowing liturgies in formerly Christian churches and encouraging interfaith dialogue with the Vatican, arguing that these should be accompanied by permissions to Muslims to hold Islamic ceremonies in museums such as Istanbul's Aya Sofya that were converted into mosques from churches.

Opponents of the liturgy found other reasons why the liturgy's timing was suspect. They pointed out that 15 August, the Feast of the Virgin Mary, was not only the anniversary of the Ottoman conquest of Trabzon in 1461 but also that of the first PKK attack in 1984, intimating there was a hidden significance in this.

On the day of the service, hundreds of pilgrims climbed the same steep mountain paths that Athenian monks Barnabas and Sofronios ascended in 386AD, on their way, Church tradition says, to discovering the miraculous icon of the Panagia of Soumela. Priests in white vestments and black and purple headdresses surrounded a chanting Patriarch Bartholomew. 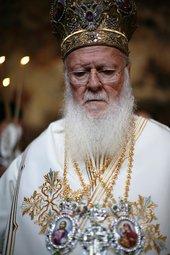 Critics have long protested against conditions placed by the secular government of Turkey on the Ecumenical Patriarch, but the liturgy may be a sign for change

​​ But in a demonstration of how the past shadows the present, the sightless, hacked-out eyes of dozens of Greek Orthodox saints painted onto the monastery walls followed the priests' movements. They had been vandalised by 18th century Turkish religious fundamentalists who believed that any representation of the human figure is a sin.

"Today, the tears of the Virgin Mary have dried up," Bartholomew said in a speech delivered in Greek and Turkish.

"In a place that was without liturgy for 88 years, a holy mystery was carried out," said Father Dorotheos Tzevelekas, a priest who flew in from his parish in Clearwater, Florida for the event. "It was a totally unexpected diplomatic coup of the kind that brings peoples closer together."

As in the case of other peacefully revived services in Greek Orthodox and Armenian churches around the country, it may now become an annual event.

On the eve of the liturgy, Pontics from nearby villages and those visiting from Greece and Russia got together for a knees-up in a local hotel. Listening to lyra played by local Muslim Pontic musicians, they danced, first slow simple dances, then increasingly complicated passionate jigs.

"Up until recently they were completely unaware of the existence of Pontic Greeks in this region, they'd get shocked when they realised there were others singing in the same dialects who were not Muslims," said Nikos Mihailidis, a Greek musician and Princeton doctoral candidate, as he watched the two sides mingle and talk. "In the past fifteen years, things have opened up, roads have been drawn and communications with the outside world established."

And indeed, Turkey has started to discover its non-Muslim cultural heritage. And as a consequence, the country is slowly but surely paving the way for the future.

END_OF_DOCUMENT_TOKEN_TO_BE_REPLACED
Social media
and networks
Subscribe to our
newsletter