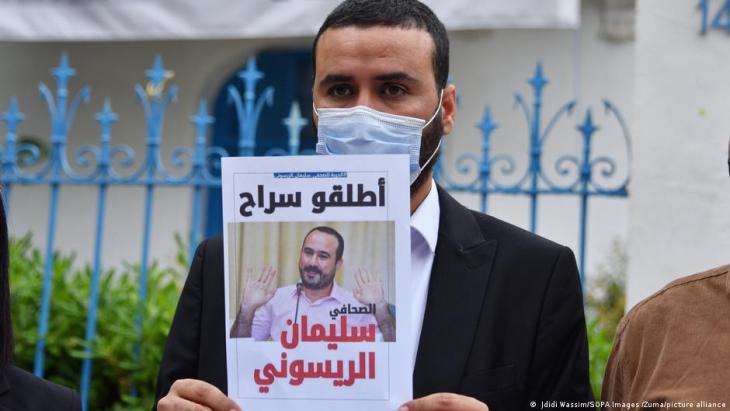 Growing repression in Morocco
Creating an atmosphere of fear

On 23 March 2022, Moroccan authorities arrested blogger and human rights defender Saida al-Alami over her social media criticism of the Moroccan government and security services. Al-Alami, a well-known and vocal activist, has consistently expressed her criticism of authorities, as well as her solidarity with journalists known for their critical opinions, on Facebook. The General Prosecutor accused Al-Alami of a number of serious violations including "insulting a body regulated by law," "insulting public officials while carrying out their duties," "contempt of judicial decisions," and "broadcasting and distributing false allegations without consent." Ultimately, the Casablanca Court of First Instance sentenced Al-Alami to two years in prison.

A few days after Al-Alami's arrest, the Al Hoceima (North) Court of First Instance issued a four-year prison sentence for blogger and former activist in the Hirak Rif Movement, Rabih al-Ablaq, as a result of videos that he posted to Facebook and Youtube which criticised King Mohammed VI and Prime Minister Aziz Akhenoush and questioned the source of their wealth. Al-Ablaq's trial before the Al Hoceima Court began on 11 April, and the King's attorney (the General Prosecutor) accused him of "publicly violating the duty of reverence and respect for the king's person."

Intolerance of the independent press

This crackdown on activists and bloggers has brought into focus the Moroccan authorities' increasing intolerance of the independent press, which is becoming a "distant memory" according to Eric Goldstein, Deputy Middle East and North Africa Director at Human Rights Watch. To carry out this crackdown, authorities have utilised the model that prevailed under former Tunisian dictator Zine El Abidine Ben Ali. This proven strategy seeks to silence dissident voices by using sexual assault and immoral behavior allegations guaranteed to destroy the reputations of the accused. 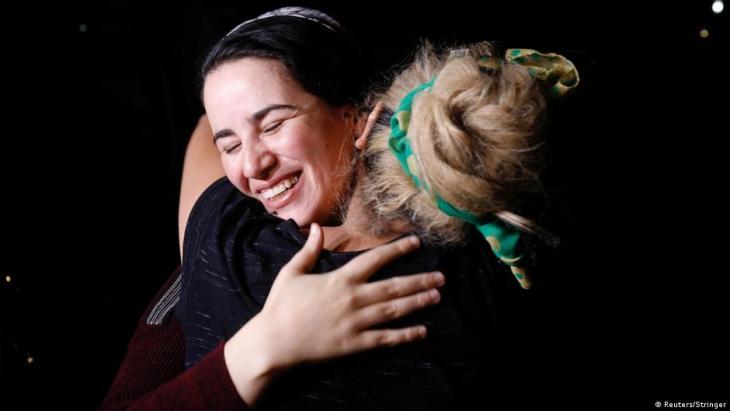 Hajar Raissouni hugs a supporter on her release from prison after King Mohammed VI overturned her one-year sentence and conviction on charges of having had an "illegal abortion" and pre-marital sex. The charges were widely seen as an attempt to silence a journalist who is critical of the government. Raissouni, who works for Akhbar Al-Yaoum, had herself said that the charges were politically motivated by her reporting

Tawfiq Bouachrine, director and founder of Morocco's most independent – yet now discontinued – newspaper, Akhbar al-Youm, was arrested and sentenced to 15 years in prison for "human trafficking." Subsequently, Bouachrine's lawyer, Mohamed Zayan – former Moroccan Human Rights Minister – was also sentenced to three years in prison following a complaint filed against him by the Ministry of Interior. Soulaiman Raissouni, Bouachrine's replacement as editor-in-chief of Akhbar al-Youm, was then arrested and charged with the sexual assault of another man. Hajar Raissouni, Soulaiman's niece, was later arrested on charges of "extramarital sex and abortion." Similarly, last year, Omar Radi, a well-known journalist, was charged with "espionage and rape." He was convicted and sentenced to six years in prison last March.

Ultimately, by harassing, intimidating and arresting independent journalists, activists and influential social media bloggers, the Moroccan authorities aim to create an atmosphere of terror among prominent social media figures and within the community of human rights activists. Simultaneously, the weaknesses and growing fragmentation of the democratic opposition – who appear unable to overcome their ideological conflicts and intellectual polarisation – are making the situation even worse. Their division is ultimately serving the authoritarian wing within the regime and allowing it to further control the situation.

Moroccan authoritarianism is not only using the judiciary and penal system to intimidate the opposition and rein in independent journalism, it is also successfully "weaponising" public defamation through newspapers and media outlets that are openly loyal to the regime. Such defamation is primarily used to discredit critical voices through the publication of unfounded criminal allegations and bogus charges against them. It is also used to threaten and break the morale of journalists awaiting arrest or trial. Maati Monjib, a historian and journalist, is a case in point. He was subjected to a defamation campaign carried out by the slanderous media weeks before his arrest on 29 December 2020 and was later sentenced to a year in prison for "endangering state security." 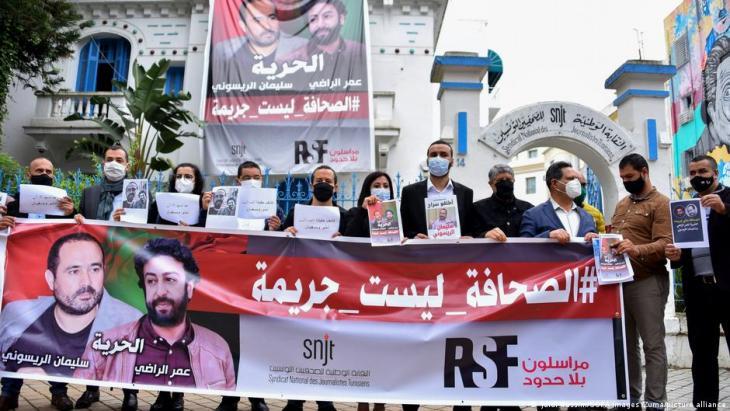 Demonstrators in Tunis show their support for Moroccan journalists. According to Abdellatif El Hamamouchi "by harassing, intimidating and arresting independent journalists, activists and influential social media bloggers, the Moroccan authorities aim to create an atmosphere of terror among prominent social media figures and within the community of human rights activists"

The slanderous media, which remains under the control of the authoritarian wing of the regime, seeks mainly to influence the target's rhetoric, positions, initiatives and reactions towards the government. It relies on smear campaigns to threaten its targets and indirectly control their public decisions. In the case of journalists, these tactics seek to influence the target's editorial line by pushing them to exercise self-censorship of all the articles, studies or ideas that they produce.

Despite widespread criticism of Morocco's deteriorating human rights situation, the Moroccan regime, indifferent to its international reputation, continues unabated its clampdown on journalists and human rights defenders. Indeed, on 12 April 2022, the US Department of State issued its 2021 Country Reports on Human Rights Practices. In relation to Morocco, the report noted "the growing arbitrary arrests of journalists and civil society activists" and the spread of media defamation campaigns that "harass and intimidate journalists."

It seems unlikely that the regime will stop these practices, especially as it is forced to deal with the repercussions of inflation and the aftermath of the Covid-19 pandemic which negatively affected the middle and lower classes. In fact, as Maati Monjib explains, the economic difficulties may actually incite the regime to continue to target activists and protestors through legal proceedings and increased community surveillance.

Abdellatif El Hamamouchi is an investigative journalist and political science researcher from Morocco. He is a member of the Central Office of the Moroccan Association for Human Rights. He writes for The Intercept, Open Democracy, and The New Arab. He is also the author of "Moncef Marzouki: His Life and Thought", co-written with Maati Monjib and published by the Arab Center for Research and Policy Studies in Doha. Follow him on Twitter: @AHamamouchi.

Tourists have been returning to Tunisia, Egypt and Morocco. But, given the global uncertainty caused by the Ukraine war, will the comeback be enough to save a struggling sector, ... END_OF_DOCUMENT_TOKEN_TO_BE_REPLACED

By 2050, the Middle East and North Africa could be dealing with many more elderly people suffering from dementia. A lack of facilities, specialists and local knowledge means the ... END_OF_DOCUMENT_TOKEN_TO_BE_REPLACED

Tunisians are set to vote on a new constitution on 25 July. The prominent lawyer and women's rights activist Yosra Frawes fears the referendum could facilitate a return to ... END_OF_DOCUMENT_TOKEN_TO_BE_REPLACED

For the first time since 1989, Algeria‘s authoritarian regime has sent a military parade marching through Algiers. A formidable show of strength designed to impress rival regional ... END_OF_DOCUMENT_TOKEN_TO_BE_REPLACED

Although many Arabs express sympathy for the Ukrainian people, social media reveals a current of support for Russian President Vladimir Putin that is rooted in polarisation, ... END_OF_DOCUMENT_TOKEN_TO_BE_REPLACED
Author:
Abdellatif EL Hamamouchi
Date:
Mail:
Send via mail

END_OF_DOCUMENT_TOKEN_TO_BE_REPLACED
Social media
and networks
Subscribe to our
newsletter