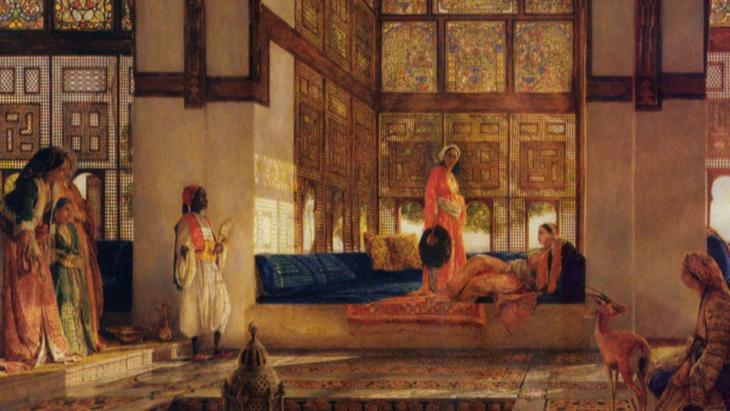 Guardians of Thrones
When women ruled the Muslim world

Were it not for the timely intervention of women down the centuries, many an Islamic dynasty would have torn itself apart. By Mohamed Yosri

The ancient East knew many female leaders who were successful rulers of kingdoms, yet authority in the Islamic world was the exclusive preserve of men. Sons, brothers and grandsons were the only ones with a recognised right to inherit power. Nevertheless, Islamic history is riddled with severe crises that threatened to destroy a number of dynasties had it not been for the intervention of women, who assumed guardianship of the young caliphs and kings as a way of protecting the caliphate and realising their own ambitions of power.

So how were these women able to scale the ladder – commanding armies, running states and kingdoms – in the face of cruelty, tyranny and violence?

Al-Khayzuran: the power to defy history

None of the women of the Abbasid caliphate have gone down in history quite like Al-Khayzuran bint Atta, wife to Caliph Al-Mahdi and mother to the caliphs Al-Hadi and Harun al-Rashid.

Originally, Al-Khayzuran – of Yemeni descent – was brought to Baghdad as a slave. She captured the heart of the Caliph Al-Mahdi, who broke all conventions of the Abbasid dynasty by freeing her and making her his wife.

She was known for the visible role she played in various aspects of running the caliphate. Supported by her husband′s high regard for her, she was consistently involved in politics and decision-making.

As Al-Tabari recounts, Al-Khayzuran continued to play a vital role following the death of Al-Mahdi in 785 AD and the succession of her son Musa Al-Hadi to the throne, ruling in her capacity as guardian to the caliph.

In his book History of the Prophets and Kings, Al-Tabari describes her as a woman who controlled her son, pushing him along the same path as "his father... the tyrant who ruled with order and strength." Historians view her relationship with her son as problematic. It is said that Al-Hadi asked her to stop interfering and spend the rest of her life praying.

Stories tell of her attachment to power; it was rumoured that she was the one to plot the assassination of her son when he fell ill. Al-Tabari records that Al-Hadi′s death was his mother′s fault; she it was who ordered one of her slave-girls to suffocate him in his bed.

Once the caliphate had sworn allegiance to her younger son Harun al-Rashid, the position of Al-Khayzuran was strengthened yet again and her rule continued until her death in 789 AD, two years after the death of her son Al-Hadi.

Millions in Idlib depend on aid coming through a northern border crossing. On 10 July, the UN Security Council votes whether to keep it open. The decision may hinge not only on ... END_OF_DOCUMENT_TOKEN_TO_BE_REPLACED

Although many Arabs express sympathy for the Ukrainian people, social media reveals a current of support for Russian President Vladimir Putin that is rooted in polarisation, ... END_OF_DOCUMENT_TOKEN_TO_BE_REPLACED

Bachtyar Ali sends the hero of his latest novel – "Mein Onkel den der Wind mitnahm" – literally flying. Jamshid is so thin after his years as a political prisoner that a gust of ... END_OF_DOCUMENT_TOKEN_TO_BE_REPLACED

The murder of a female student at Mansoura University in the Nile Delta has sparked a long overdue debate on femicide in Egypt. Karim El-Gawhary reports from Cairo END_OF_DOCUMENT_TOKEN_TO_BE_REPLACED

For a century, the Kurds and other minorities in Turkey have been subject to state repression. With his dissertation "The Kurdish Question in Turkey", political analyst Ismail ... END_OF_DOCUMENT_TOKEN_TO_BE_REPLACED

END_OF_DOCUMENT_TOKEN_TO_BE_REPLACED
Social media
and networks
Subscribe to our
newsletter