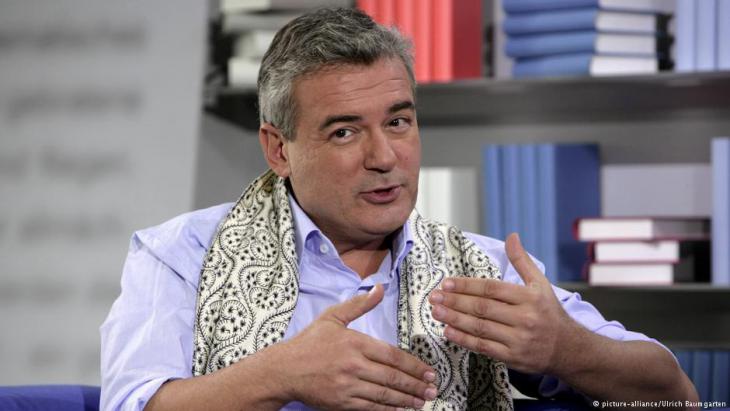 It′s not a black and white world!

Viewing the world in absolute terms only serves to encourage propaganda and make simplistic scenarios seem like real solutions. The current public discourse on the refugee crisis is like a piece of political satire, says Ilija Trojanow

Thinking in dichotomies is an early stage of idiocy. Anyone who doesn't believe this yet will find plenty to convince him on today's political landscape. Let's take, for example, an issue that has been the cause of much hysteria lately: the so-called refugee crisis. For some time now, the realities of German politics have been confronted with a determined wave of wishful thinking. If you had been travelling in outer space for a year and were to return to Earth, the prevailing dispute would be easy to summarise: we can do it, say some. And what do the others say? No, we can't do it.

The public discourse is like a piece of political satire. All those involved gathered together to attempt a high jump, then the bar was raised and they began animatedly discussing whether they could surmount this new height as well. The two sides are now at loggerheads about the seemingly absurd claim by the one faction that the height can indeed be mastered. The second side emphatically disagrees, making the likewise seemingly absurd claim that this height is impossible to surmount – and any attempt would only lead to all kinds of fractures, perhaps even a broken neck.

As a consequence of this woodcut-like view of the world, simplistic scenarios are being offered as solutions. Closing off borders, for example, really means making them impenetrable. Whether or not this is even feasible given the "illegal" migration that exists all over the world today is simply ignored. Repatriating refugees actually means removing them from one's own country. No one devotes any thought to how this deportation of hundreds of thousands of people is to be organised. Currently, 65 million people worldwide are on the run, yet from the discourse in Germany, one would think it was all about whether to turn the tap on or off.

Or take the US elections. The understandable and necessary rejection of the sleazebag Donald Trump resulted in the candidate Hillary Clinton being magically transformed in the blink of an eye (the favourite technique of the dichotomists) into a shining beacon. Critical news coverage of her, or even the disclosure by the media of her highly dubious political and economic machinations, was demonised, for example following the recent revelations by Wikileaks. Julian Assange was immediately labelled a crypto-rightist and a new, highly original axis of evil was constructed: Assange – Trump – Putin. 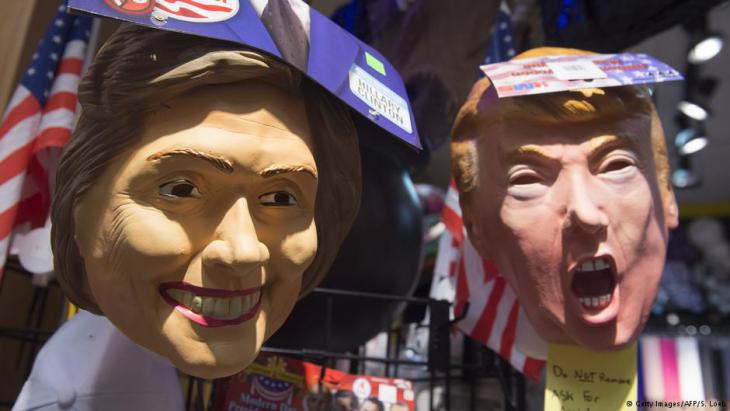 The US presidential election – characterised by polarisation, pitting good against evil: "The understandable and necessary rejection of the sleazebag Donald Trump resulted in the candidate Hillary Clinton being magically transformed in the blink of an eye (the favourite technique of the dichotomists) into a shining beacon. Critical news coverage of her, or even the disclosure by the media of her highly dubious political and economic machinations, was demonised," writes Trojanow

Which brings us to another Dr. Jekyll and Mr. Hyde phenomenon: Vladimir Putin. For some the biggest threat to world peace, for others a staunch fighter for the rehabilitation of a humiliated Russia. Those traversing today's political landscape with a divining rod are utterly fixated on its every bend in one direction or the other, ignoring all else happening around them.

It's like a seesaw. You sit down on one side and the seesaw goes down; if you don't budge, you will only serve as a counterweight to the other side, which just as stubbornly remains frozen in position. It goes up and down, again and again. It may be fun for those on the seesaw, but all others are experiencing a discursive state of emergency.

Looking back at history, such dichotomous thinking has always led to suboptimal results. Anyone who often finds himself being put on the spot, asked to discuss the as yet scarcely digested criminal history of Communist rule, will notice that taking an anti-Fascist stance often leads to gazing with a milder eye on Stalinist and post-Stalinist politics or even downplaying their impact. Whoever was against Hitler is simply to be admired. And anyone who as a student took to the streets proclaiming loudly with all his heart and soul the virtues of the mass murderer Mao Tse-tung will forgive himself with a smile for his youthful confusion and go on to loudly warn against the foreign infiltration of the fatherland. Because one thing is certain: the dichotomist never learns how to think!

Looking outwards with the knowledge from within: a conversation with the Iraqi writer Sinan Antoon on the future of his homeland. Interview by Lena Bopp END_OF_DOCUMENT_TOKEN_TO_BE_REPLACED

Political analyst Taqadum al-Khatib argues that Egypt can, in co-ordination with its European partners, develop a common vision to solve the complex conflict in Libya. For this to ... END_OF_DOCUMENT_TOKEN_TO_BE_REPLACED

At the suggestion of his Arab students, Israeli psychologist Ofer Grosbard created the project "Quranet", which uses texts from the Koran to solve educational problems in schools ... END_OF_DOCUMENT_TOKEN_TO_BE_REPLACED

Libyans have mixed feelings about the EU. On the one hand, they admire what Europeans have achieved, but on the other, they feel let down. Moutaz and Walid Ali report from Tripoli END_OF_DOCUMENT_TOKEN_TO_BE_REPLACED

Turkey's President Erdogan wants to create a second Bosphorus. The cost to the economy and environment would be enormous – and that's why Istanbul's mayor is attempting to stop ... END_OF_DOCUMENT_TOKEN_TO_BE_REPLACED

Libya is in turmoil and no political solution is in sight. The EU's inability to take concerted action in the country, meanwhile, is being exploited by third parties, such as ... END_OF_DOCUMENT_TOKEN_TO_BE_REPLACED
Author:
Ilija Trojanow
Date:
Mail:
Send via mail