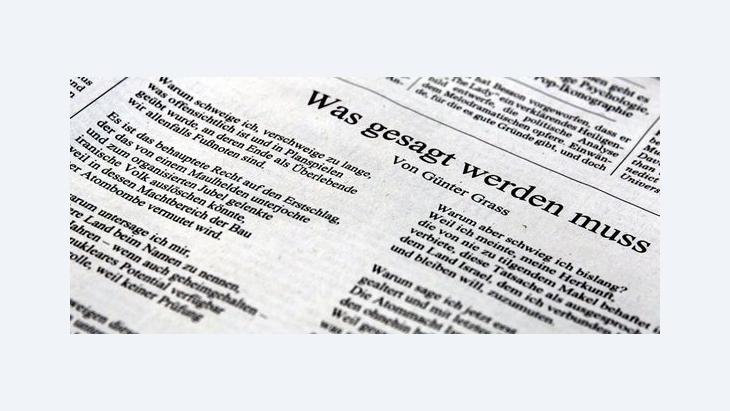 ﻿In Germany, a public debate has been engendered by a bad poem. But the situation of the people in the Gaza Strip, people for whom questions of peace or war are matters of vital importance, is of no interest to those engaged in the debate. An essay by René Wildangel

A veritable flood of press opinion and commentary has greeted Gunter Grass's poem "What Must Be Said" – and nowhere has the poem been more hotly debated than in Germany.

From a distance, the German debate seems way over the top, and from nowhere more so than the vantage point of the Middle East. Grass has written a poem about Israel and Iran, yet the accompanying discussion has revolved solely around the subtext of the poet's past and the question of where exactly one should draw the fine line between criticism of Israel and anti-Semitism – a question avidly debated, yet also one liberally embellished with accusations and polemics.

Reading Grass's poem in Gaza makes the debate appear even more ludicrous. It is here, after an arduous entry via the Erez checkpoint, that I read the poem and the many contributions to the debate once again. 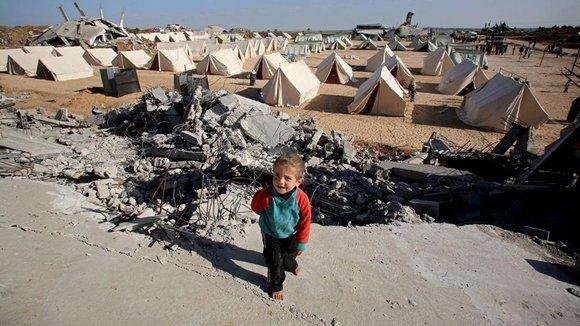 Why has Grass's poem excited such an emotional response while the plight of 1.5 million Palestinians continues to languish in obscurity, René Wildangel asks

​​The change of location makes no difference to the quality of the poem, but it does beg the question of just why it should be that it has excited such an emotional response while the plight of 1.5 million people, something I can see here at close quarters, continues to languish in obscurity (and not just because of the constant power cuts) while even those themes that Grass specifically wants to address rate barely a mention in the debate.

For a long time now, the debate has raged on with the single objective of finding out whether or not Grass is an anti-Semite.

It is a discussion that has taken some rather strange turns. In Germany, apart from the usual, obligatory tirades delivered by Henryk Broder and his ilk, the denizens of the more obscure corners of the cultural and political scene have also been working themselves into a lather in the discussion, while, in Israel, right-wing interior minister Eli Yishai, thus far best known for his expulsions of "health risk" African refugees, has decided to ban Grass from entering Israel, even though he had no intention of going anyway.

Ripples of approval have been registered from Iran and a few other places, from the wrong people and from notorious Israel-haters.

Reading Grass's poem in Gaza does not make it any better a poem. It is not a good poem, neither artistically nor with regard to its content; and Grass's worries about an Israeli "first strike" that could "wipe out the Iranian people", are plainly nonsensical, as is his dismissal of the Iranian president as a "loud mouth". The sheer brutality of the Iranian leader's dealings with his own people, both political opposition and civil society, is a considerably more conspicuous characteristic than mere boastful gesturing.

Grave consequences for the entire region

The important warning of a possible Israeli military strike against Iran's nuclear facilities – despite there being no evidence that Iran is actually intent on developing an atom bomb – falls victim to the confusion of the text. 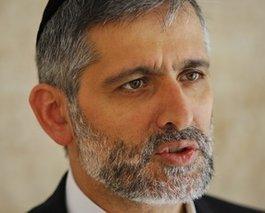 "If Gunter wants to continue publicizing his distorted and false works, I suggest he do it in Iran, where he will find a supportive audience," said Eli Yishai, Israel's Interior Minister

​​The possibility of such a strike can no longer be completely ruled out, and warnings about the consequences of any new military conflict for the entire region are extremely important – for Israel, for the US, and most certainly, for Germany also.

Another point made in Grass's poem, namely whether in the present circumstances Germany should continue to sell submarines with nuclear capability to Israel, would also have been worthy of more objective consideration. The trade is clearly in violation of German arms export policies and has the potential to further increase tensions in the Middle East rather than calming things down.

The accusation that critics of such exports want to endanger the security of the state of Israel is absurd – it is not the export of weapons but a commitment to ending the occupation and to fostering acceptance of the two-state solution that are most likely to make a real contribution to the continued existence of Israel.

To read Grass's poem in Gaza, where the Palestinian fishing boats are restricted to a narrow three-mile strip of water and where the people live under constant threat of attack from sea or air, is to gain a different perspective on the submarine question. Is anyone actually discussing the Palestinians right to exist? Grass would have done the debate a greater service had he chosen to write an incisive essay on issues such as the Israeli nuclear programme, German submarine sales, or Israeli occupation and settlement policies.

To read Grass's poem in Gaza is to become aware of just how devoid of empathy with the people of the region his writing is. Avowedly – and not without hubris – he wishes to help "Israelis and Palestinians, even more, all peoples, who live side by side in enmity in this region occupied by delusion". It is not delusion that occupies the West Bank and Gaza, however, it is Israel. It is poor style and in part confused thinking that prevent precisely these aspects from becoming topics of discussion.

Reading Grass's poem in Gaza makes the debate on whether criticism of Israel is possible in Germany seem even more absurd. How, when one knows the situation of the people in Gaza, can one not be critical of Israel, or rather of the policies of the Israeli government, which is responsible for the continued occupation of the West Bank and the sealing off of the Gaza Strip?

Another point made in Grass's poem, namely whether in the present circumstances Germany should continue to sell submarines with nuclear capability to Israel, would also have been worthy of more objective consideration, Wildangel suggests

​​And this has nothing to do with either a German or a non-German perspective; it is simply about international law and about looking at the situation from a universal and from a humanitarian point of view.

The continuing blockade is lunacy and will have as disastrous consequences for the young people of the Gaza Strip as it does for the security interests of the Israeli state. To try to justify such action as a response to Hamas terrorism is simply a travesty. One need only look at the uncompromising way in which the Hamas government deals with its own people while at the same time desperately trying to put a stop to the rockets in order to be able to do business with the West.

It is simply nonsensical to say that criticism of Israel is impossible in Germany. But too many Germans – perhaps in the case of Grass, given his past, this is less surprising – have a strangely ambivalent and unfortunate approach to the subject, a compulsion to break taboos, even where they do not actually exist, instead of taking a view that prioritises international law and universal values. Grass even talks of holding back, of forbidding himself "to name that other land". What nonsense!

To read Grass's poem in Gaza is to see no less clearly that Germany bears responsibility for the past and for the Holocaust. Part and parcel of this responsibility is the determination to fight anti-Semitism and racism all over the world.

But solidarity with a right-wing Israeli government that is culpable of massive deprivations and dispossession of the Palestinians has as little to do with such responsibility as the blind and ritualised acceptance of a multi-billion weapons deal, or reluctance to engage in the debate on Israel's nuclear programme, or possible plans to attack Iran's nuclear programme.

To read Grass's poem in Gaza is to understand that "what must be said" has, once again, not been said. There is much that must be said about the Gaza Strip, but no one is saying it. It needs to be said that 80 per cent of the population are now dependent upon humanitarian aid, that unemployment and lack of prospects is leaving young people devoid of hope, that the tunnel economy is creating dangerous parallel structures and favouring mafia-style clans.

It needs to be said that the complete blockade and isolation of Gaza is an act of insanity, one that is alienating an entire generation of young Palestinians, not only from Israel, but from the whole world and depriving them of their basic rights of humanity, dignity, freedom and opportunity. And it needs to be said that the Israeli occupation is detroying two societies – the Palestinian and the Israeli.

To read Grass's poem in Gaza is to become very aware of what it is that is missing: German intellectuals, politicians and the public are working themselves into a sweat over a bad poem. But the plight of the people in the Gaza Strip, people for whom questions of peace or war are matters of vital importance, is of no interest to those engaged in the discussion. That is the real tragedy of this particular German debate.

René Wildangel is a historian of the Middle East and director of the Heinrich Böll Foundation in Ramallah.

Home
Print
Newsletter
More on this topic
Debate about Günter Grass's Poem: The Best of Intentions, the Worst of OutcomesDialogue: When Is Opposition to Israel and Its Policies Anti-Semitic?
Related Topics
Democracy and civil society, Gaza War, Israeli-Palestinian conflict, Middle East peace process
All Topics

The Kurdish YPG militia did the heavy lifting in the fight against the "Islamic State", yet many foreign YPG adherents, including Germans, have come home to find themselves under ... END_OF_DOCUMENT_TOKEN_TO_BE_REPLACED

Few Muslims have to date visited the Auschwitz-Birkenau concentration camp memorial site. Now high-ranking representatives of Muslims and Jews are travelling together to the place ... END_OF_DOCUMENT_TOKEN_TO_BE_REPLACED

The terror attacks in Paris, Brussels and Berlin were all carried out by men radicalised in jail. In Germany, politics and the judiciary are trying out new approaches to prevent ... END_OF_DOCUMENT_TOKEN_TO_BE_REPLACED

Elke Muller is fighting for her daughter Anna, who fell in love with a young Afghan and converted to Islam. The mother spoke to Esther Felden about feeling alienated and her fear ... END_OF_DOCUMENT_TOKEN_TO_BE_REPLACED

As historian Wiiliam Dalrymple writes in his essay, scholars are only now beginning to realise the extent to which the Mughal emperors adopted what most would assume to be ... END_OF_DOCUMENT_TOKEN_TO_BE_REPLACED
Author:
René Wildangel
Date:
Mail:
Send via mail